"At least we have him returning."

That's what Lehigh fans have been able to say to themselves each offseason for the last five years.

Some first-team all-Patriot League offensive weapon.  Some top Patriot League defensive leader.  Something... measurable.  "We lose a lot, but at least we have him."

During the past three season, Mountain Hawk fans have grown accustomed to head coach Andy Coen and offensive coordinator Dave Cecchini's abilities to mold new players and plug them in, not missing a beat.

But they've never had to replace this much.  Last season's top rushers are gone.  The receiver who's noe made the 53 man roster of the Jets.  The linchpin of the offense - the quarterback - gone.

As we finally enter the 2013 Mountain Hawk football season, the biggest question to answer is: can Lehigh reload on offense?

It's been an offseason with big shoes to fill on offense, to say the least.

Forget a second, if you can, the loss of WR Ryan Spadola,  who made the 53 man roster of the Jets this offseason and was Lehigh's leading receiver last season with 851 yards while playing through mononucleosis.

There's also the graduations of QB Michael Colvin and RB Zach Barket, who combined for just over 1,000 yards rushing and 16 rushing TDs, and that of TE Jamel Haggins, a great tight end who battled injuries to catch 13 passes for 172 yards and 2 TDs last season.

It's hard to remember the last time so much offensive production graduated at the same time last season's top passer, receiver, and two top leading rushers.

And only junior OL Ned Daryoush goes into this season as a preseason all-Patriot League offensive selection. 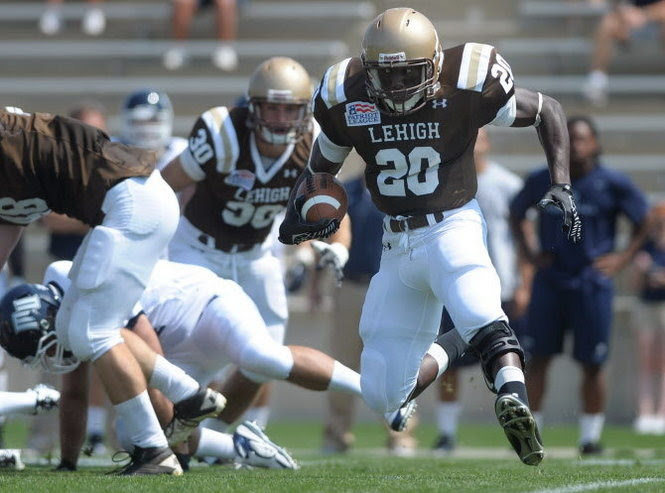 But that fact didn't seem to faze senior RB Keith Sherman, who had 7 rushing touchdowns last season and will be counted on as a critical offensive piece in 2013.

The starting backfield consists of Sherman, with shifty junior RB Rich Sodeke backing him up as a change-of-pace back, and they have a lot of confidence that they will be able to keep the offense firing.

"This year, just because the new QB isn't going to have had as much experience as Chris or Mike, I think I might have an expanded role," he said.  "I might carry the ball a lot more than in years past.  But I think at the end of the day whatever game plan the coaches come up with, I'll just do my part, and help the team win."

That game plan will be unveiled for the first time this Saturday at Murray Goodman stadium, with senior WR Lee Kurfis stepping into the X receiver slot that Ryan primarily occupied for the last two and a half years.

Lee has been in this situation several times before in his Lehigh football career, most recently last season against Bucknell when Ryan was out with mononucleosis.

“When I first heard Ryan wasn’t going to play it really upset me,” Kurfis said before that game. “He’s one of the hardest workers in this program and is a huge leader for us. At the same time we had to get excited. With Ryan down I’d go to the X receiver, who is kind of our go-to guy in this offense. Junior WR Josh Parris has done an incredible job fulfilling my role on the other side. As much as it stinks having Ryan out, we have the depth in the receiving corps to be able to step up.”

With Lee at the X and Parris at the Z, two players who went to relatively nearby high schools, there's a lot of optimism that the receiving corps will be as potent as ever, with senior WR Sergio Fernandez-Soto, junior WR Derek Gaul, sophomore WR Stephen Sansone and sophomore WR Derek Knott also getting time in formations as well.

While billed as a "QB controversy" going into the spring, senior QB Brandon Bialkowski solidified his hold as the 2013 starter all through the spring and preseason camp and was named the No. 1 QB officially this week despite suffering a leg injury a couple weeks ago at the end of the preseason practice session.

Coach Coen said that Brandon returned to practice Tuesday, and "looked really good," according to Mike LoRe of the Express-Times.  Considering that Brandon got injured, he told me he felt starting the season a week later than many other FCS teams was a blessing in disguise.

"I believe not playing this week is a real plus for us, he told me last week.  "School has begun and the guys need to really focus and prioritize things properly, which is always a challenge for our first year players. We had a slew of injuries around practices 6-10, but most appear to be returning at different intervals."

Thankfully for Lehigh fans, Brandon's return from injury came in the nick of time.

The lefty from Gilbert, Arizona has showed a strong, accurate arm in practice and will make his first-ever regular season start this Saturday, and he has already dedicated his senior season to his brother, Nick Bialkowski, who suffered an injury and will be out for his senior year.

Backing him up is junior QB Matt McHale, a mobile quarterback that might get some "Wildcat" snaps on Saturday, and freshman QB Nick Shafnisky, who will be the holder on field goals and extra points and the No. 3 QB.

The offensive line, which emerged as a huge strength in camp, returns Daryoush and a bunch of players that return an interesting mix of experience and new talent. 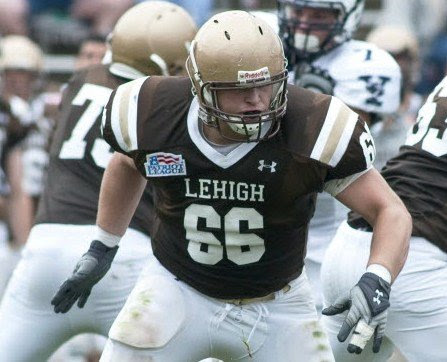 Last season, Lehigh ranked 5th in FCS in regards to quarterback protection (sacks allowed) and they hope to continue that trend into 2013.

Adding to the blocking experence on the "O" line are senior FB Zach Hayden, junior TE Tyler Coyle, and junior TE Dylan Colgate for both their pass-catching and blocking abilities.

As you can see, though some parts of the Lehigh offense are lacking game experience - and preseason all-Patriot League recognition - there a plenty of pieces there to come together and have the same type of potent offense Lehigh fans have come to enjoy.