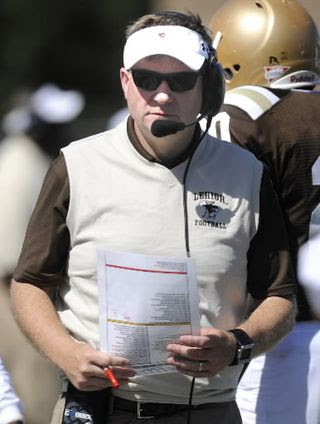 It's not nearly enough to have a "year off" recruiting when you're at - or, in Lehigh's case, near - the top.  You lose all-league players like WR Ryan Spadola and DT Sajjad Chagani and you have to recruit all-league players to replace them.  There's never any room for error.

Lehigh fans who have been waiting with baited breath to see how scholarships have found their way into Coen's class of 2017 finally have a chance to discover what, if any, impact scholarships have.

The Patsy Ratings offer an answer, and it's a surprising one.

Scholarships seem to have had a good impact on Lehigh's first scholarship class.  Did it give Lehigh the same type of large Patsy Point class that, apparently, Colgate and Fordham had?  No, it did not.


THE GOOD - Coen seemed to go up against some of the big boys when it came to recruiting, and seemed to do fairly well.  If you believe the scouting services - again, it's debatable how wise it is to do so - Lehigh nabbed the best incoming football player of all, a *** recruit, in this class, a player with multiple FBS offers on the table and only became available when a Big East squad changed football coaches.  It is circumstantial evidence, but it seems like scholarships have made a very positive difference in this class and allowed Lehigh to nab several players when they weren't in the game before.

THE BAD - For certain, the Committee, like many observers, came into these Patsy ratings with preconceived notions on Lehigh's incoming class.  After the results were tallied, though, and the points counted, there was definitely a "That's it?" feel to the ratings.  Whether affected by their recent success, external media or (ahem) their passionate fan base, even before the Points were counted Lehigh's incoming class was seen as one of the giants of this go-round.  But when the spreadsheet was done, it was right around the same level as Lafayette and Bucknell.

If you believe the Patsy Ratings, this class is neither a powerhouse, or dud, of a class.  It's squarely in the middle.  This surprised the Committee.

QUALITY = 22. 10/20 were recognized by the scouting services, or exactly half of the overall incoming class.  One recruit, a *** from ESPN (and ** everywhere else), was the highest-rated player in this year's Patsy ratings.  But aside from that, there were only two other ** recruits, and only one of those were confirmed.

To be sure, a 22 is not a bad Quality Rating overall, in this class and in prior years.  Yet it lags behind the giants of this recruiting year thus far, Colgate and Fordham, who had more players rated and more players with stars.  In terms of the Patsy Ratings, the Raiders and Rams did just a little bit better.

CLASS SIZE = 2. 20 recruits, just barely ahead of the minimum threshold of athletes for "replacement", which is 18.  It's worth noting here that the Committee has thought about making a 3-point adjustment for all schools offering football scholarships, considering the expected smaller class sizes.  Not this year, though.

DISTRIBUTION = 7.  One Committee member brought up the thought that the incoming recruit listed as a fullback should be counted as a running back for purposes of distribution, but he was quickly shouted down by the other members.  Lehigh gets 7 out of the 8 possible distribution points.

SPEED = 6. A shockingly low speed number with 50% of the recruits being rated, with most of the points coming from one incoming recruit.  Speed information, it must be said yet again, is hard to come by.  But with the number of rated players Big Brown had, and a fair amount of speed players signed in this class, this has to be the more disappointing part of Lehigh's ratings. A fluke?  Mountain Hawk fans sure are hoping so.

TRIGGER = 0. The one QB signed in this class was a very highly-touted kid locally - more on that later.  None of the national rating services, however, had him more than just fogging the mirror.  This had a huge effect on the Patsy Point level of the class - as regular followers of the Patsy Points know, star rated quarterbacks are the gift that keeps on giving.  Had he been star rated, Lehigh would have easily had six more points.

NEEDS = 7 (of 12):
DL = 3 (of 5). 3 defensive linemen.  All the Lehigh people polled said defensive line needed replacement quality and depth. Mister 3-star provided some quality.  But it seemed like Big Brown needed at least one more lineman to provide the necessary depth, and didn't get it.

OL = 3 (of 4). Four linemen, all Jumbo, one ** recruit.  Not bad, but the Committee concluded that they needed at least one more starred recruit to meet the whole need.

WR = 1 (of 3). 2 wideouts.  One was recognized by the recruiting websites and at least promises some speed.  It certainly didn't provide a lot of numbers for this critical area.  Some might even argue 1 point is generous here.  Not the Committee, however.

COMMITTEE ADJUSTMENT: 0. The Committee, especially this year, tries to look at the overall Patsy rating and see if it truly represents the incoming class.  One famous Patsy class involved a seven-quarterback class, which had a negative Patsy Rating adjustment because it was physically impossible for that team to start seven QBs, even with a whole lot of injuries.

In this Big Brown class of 2017, there was an increased local flavor, with two very highly-touted local products.  One signed before the end of Lehigh's football season.  Another announced in the local paper, with a mention that he chose Lehigh over a powerhouse CAA program, New Hampshire.

One Committee member argued that this should be taken into account when making the Mountain Hawk Patsy Rating.  "You talk so big about offers over stars," the Member said.  "Well, here you go: here's a kid that got offered by a CAA school.  This should be taken into account.  That deserves at least one quality star.  After all, the rest of Lehigh's star kids had offers from some surprising schools.  Some of the ones simply recognized by the recruiting websites did, too."

But the other Committee members shouted him down very quickly.  "What are we, making money on the Patsy Ratings?" another said.  "We can't track down every local paper to find out who was offered by who.  If it shows up on some sort of official recruiting site, that's one thing.  But the Committee doesn't have the time or the money to find every scrap of newspaper and follow up every recruiting lead or 'interest'. What's next, tracking phone calls?

"Furthermore, Bethelehem and Easton have two local newspapers to cover their high schools and Lehigh and Lafayette.  If you include every newspaper report, the Maroons and Browns will have a giant advantage over the rest of the league.  When was the last time you heard of a fawning report from Worcester on a kid going to Holy Cross?"

The Committee member piped down, because deep down inside, he knew they were right.