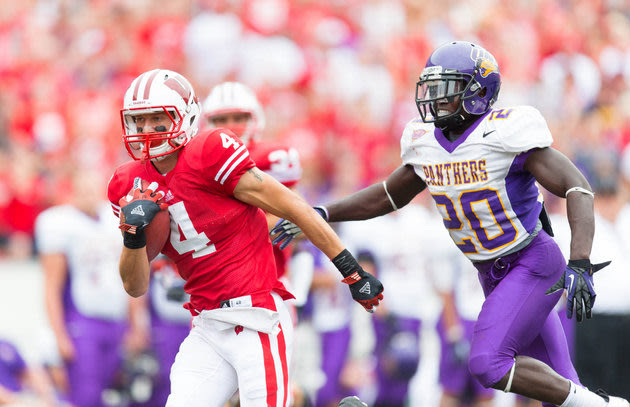 It is truly hilarious when people who don't know what they're talking about try to make news points, and news decisions, based on one side of the story.

Such is the case with the breathless coverage of the Big 10's decision, led by former Wisconsin head football coach (and current athletic director) Barry Alvarez, who shared with the Milwaukee-Journal that Big 10 officials "recently agreed to stop scheduling nonconference games against FCS programs."

Of course, the first thing papers around the country do is pull a picture from such an FCS game involving Wisconsin from last season - surely a poster child for a blowout, right?

Um, not exactly.  Northern Iowa gave Wisconsin "all they could handle" in a 26-21 nailbiter.

Wait, it gets better.

Predictably, so-called B1G apologists national columnists hailed the decision by the B1G as some sort of beautiful victory for college football.

Yahoo's Dr. Saturday, whose focus is mostly the B1G, said "The Big Ten might not be eliminating all bad non-conference games, but it's getting rid of the worst of them."

That is a great step, and hopefully other conferences (and by "other conferences" we mostly mean you, SEC) stop the practice of wasting a precious Saturday afternoon in the fall on FCS opponents. The FCS teams benefit with a large payday, and that's great for the bean counters at those schools. It's not good for anyone else.

It stinks for the season-ticket holders that have to pay for a sham of a game. It's nothing worth watching on television. The FBS team has nothing to gain, because a win is expected but a loss goes down in infamy. And while the FCS team will get enough money to build a new weight room, the most common result is getting pounded by 40 or 50 points, which can't be that enjoyable for those players.


Think Wisconsin head coach Bret Bielema was talking about how their game against Northern Iowa was a "sham"?  Um, not exactly.

"There's a lot of FBS schools that I'd rather play than those guys," Badgers coach Bret Bielema said. "They're a really, really good football team."

In fact, tests from FCS schools are depressingly common - if you know which FCS schools to look for.

Until they started packing the schedule with cupcakes like partial-scholarship Austin Peay and transitioning FCS school South Dakota, Wisconsin was no stranger to FCS scrapes.  Wisconsin was given everything they could handle by The Citadel in 2007 before winning 45-31. In 2008, the Badgers were a missed field goal away from being stunned by Cal Poly, squeaking by 36-35.

Afterwards - and perhaps not coincidentally - FCS cupcakes started showing up on the schedule instead of the tougher FCS teams, not to mention other FBS teams that weren't exactly going to be competing for the crystal ball trophy anytime soon like UNLV and San Jose State.

But lazy reporting never got in the way of a good story, so (no conflict of interest here!) B1G Netowrk reporter Tom Dienhart reports - breathlessly! - that dropping FCS games - wait for it - makes total sense!

Alvarez gave no indication on when Big Ten schools would stop playing FCS foes. But, it can’t happen soon enough in what often are little more than glorified scrimmages.

Michigan and Penn State are the lone schools with no FCS foe in 2013. Take a bow, Brady Hoke and Bill O’Brien.

Sounds compelling - until you, um, look at some of the actual scores from the very games he quotes.  Indiana squeaked by Indiana State  24-17.  Iowa scraped by Northern Iowa 26-17.

Only one of the games won by the Big 10 teams were against FCS playoff team: granted, Minnesota did beat New Hampshire impressively, 44-7.

But almost all of the blowout wins against FCS schools came against body-bag teams, like 1-10 South Dakota, 1-10 Idaho State, 3-8 Gardner-Webb, or 3-8 Western Illinois.  And it's not like the B1G coaches didn't know what they were getting, either.  Idaho State's last winning season came in 2003.

Why do national college football columnists consistently grade Austin Peay and Cal Poly the same?  No reporter in their right mind would equate a win over San Jose State and a win over USC as the same since they're FBS schools, so why do it at the FCS level?

Grade schools by their records and their achievements regardless of level.   Northern Iowa fields competitive teams year in and year out in FCS.  They deserve better than to be lumped in with Idaho State, just as it's fair to not lump Maryland and Michigan together just because they're Big Ten teams.

But putting aside my obvious pride for the best FCS schools for a second, the ban against FCS schools by the B1G cannot last because of a better reason: it is colossally stupid.

Critics of FCS vs. FBS contests have two main criticisms of these games: that they replace games against traditional powers that would count towards the postseason, or that FBS games in general are more exciting and/or get more fannies in the seats or TV ratings.  Both criticisms are ridiculous.

Why would Alabama trade a sellout against an FCS foe, which still counts for bowl eligibility, for a home-and-home where their fans will have to travel across the country?  After all, Alabama scheduled 1-10 FCS Western Carolina last year, and nobody questioned their strength of schedule after they walloped their SEC competition and Notre Dame in the crystal ball game.

When you remove the Alabama's, the Notre Dame's, the Stanfords, the USC's and the like, you end up where you were before: the Eastern Michigan's, the Arkansas State's, the Western Kentucky's.

And it also removes for Big Ten schools one of the biggest benefits for FBS football teams that schedule FCS games: they never have to worry about going on the road to play in Itta Bena, Mississippi, or the homes of other FCS schools.  They are guaranteed one-and-dones, and often achieved at a discount to other FBS foes.

Big 10 schools will now, most likely, need to spend more on higher guarantees to bring in FBS schools, and probably pay for more return trips to Eastern Michigan or Central Florida.  They'll pay more for the games they used to get cheap - and the remainder of FBS will continue to get on the cheap.  Because you know Alabama isn't going to give up games against Western Carolina.  If they go undefeated, they're still going to competing for the Crystal Ball.

After you demonstrate that you're committing to more Ball State's and Bowling Green's, and you're committing to giving up more home games, this is when Dr. Saturday's attempts to make the misconceived argument that people will start caring more when Illinois plays Eastern Michigan instead of Southern Illinois.

First of all, have you ever tried to get Nielsen breakdowns of Big 10 Network regular-season games?  The answer is, you can't, at least not easily.

"Figures were not available for CBS Sports Network, Big Ten Network, Pac-12 Network and Fox College Sports, as those stations are not rated," says the Sports Business Journal, the bible when it comes to publishing TV numbers.

But what you can figure out from the data is that nationwide, the ratings of Big 10 Network games are significantly smaller than ESPN games.  That's because most all cable companies offer ESPN as a part of their basic cable package, while the Big 10 Network - despite a lot of fighting and haranguing over it - does not.

A good early regular-season matchup on ESPN, like Texas/Ole Miss, nabbed a 1.5 rating nationally on September 24th, - a week without playoff baseball, and on a station that was nationally available.  It's reasonable to assume nationally even the best Big 10 Network games average well below a 1.0, and probably much, much lower.

When Big 10 schools talk football Nielsen ratings - and, tellingly, they don't do so often - they talk about "metered markets", which is a form of cherry-picked media markets which are the home of the schools in question.  For example, Detroit (the No. 23 metered market in the nation) almost certainly is one of the markets they tracked, with Michigan and Michigan State in the footprint, while Washington, DC (No. 15) would not be included.

Is it reasonable to assume that Arkansas State will bring in "metered market" ratings while a local FCS team would not?  I don't think that's a reasonable assumption at all.

In any event, we're barely talking about moving the needle nationally when it comes to a game against an (FBS) MAC or Sun Belt school or an FCS school.  Games against Notre Dame move the needle.  Games against Southern Illinois or Florida International, no matter how good they are, don't.

Basically, this decision by the Big 10 schools in not a decision about competitiveness, since time and again it's been proven that mid-to-upper tier MAC schools and the top tier of FCS schools are equivalent levels of competition (and B1G schools have struggled against the best teams of both the MAC and FCS).

It's not about TV ratings, since it won't result in more compelling games or more TVs tuned into the Big 10 Network - if anything, that number will go down as they play more out-of-market schools.

In other words, it has everything to do with window dressing, and pushing the myth nationally that the Big 10 is "stronger" because they've replaced Northern Iowa with Northern Illinois.  Which is ridiculous.

Someone ought to let the college football "experts" know.