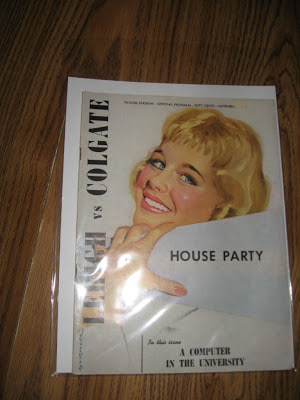 The Doris Day-esque face, presumably a co-ed from nearby Cedar Crest, leaps off the official program of the Lehigh/Colgate game of November 4th, 1961.  A reference to a "House Party" on the cover, and "inside!  A computer in the University!" only adds to its snapshot in time.

The first-ever meeting of the Red Raiders and Engineers at Taylor Stadium (or Packers, as the Brown & White had then started calling them) was expected to be a loss for a Lehigh squad that wasn't expected to do much after a 4-5 season under hall of fame head coach Bill Leckonby.

"An underdog for last Saturday's game, as it has been for most of the season," the B&W said, "the squad displayed a powerful ground attack in the first half, accounting for two TDs, and an alert, spirited defense in the last two periods."

It would only be the second home game of the year for Lehigh at Taylor stadium - five of their first six games, save a 20-6 win versus the Merchant Marines, were on the road - but it would prove to be a critical one for the Engineers in Leckonby's final season as Lehigh's head coach.

One can't help look at the pictures of the game program and see the end of a different era, with cigarette ads prominently featured ("Salem - refreshes your taste!"), as well as the prices for concessions.

(For two bucks, you could get five hotdogs and five hot chocolates, and with only thirty cents more you could get a pack of smokes, too.)

There's also a picture of the smiling captain of the 1961 team, OL Michael Semcheski, posing right in front of the same Packard Hall that you can see today on campus.

In the early 1950s, coach Leckonby was synonymous with winning seasons and runs at the "Middle Three" championship and Lambert Cups, given to the top team in the East.

By the late 50s and early 60s, however, Lehigh started to really struggle in Leckonby's later seasons, and in 1961 the Engineers hadn't had a winning record in four years.  (Though many fans might not have much cared; Lehigh did go 2-1-1 against the school that mattered the most, Lafayette.)

Leckonby, a star tailback at St. Lawrence and on the Brooklyn Dodgers of the AAFL (but as a "triple threat" he could also be considered a quarterback), he would leave pro sports to fight in the Navy during World War II.

In only four years he would guide Lehigh to their first-ever perfect undefeated and untied season (9-0-0) in 1950.

Lehigh's first-ever Lambert Cup would be won by his 1957 squad, and in his final year of coaching he would win another in 1961 - the year of this Colgate game.

Overall, he would have 85 coaching wins and six "Middle Three" championships.

As a coach, he was an outspoken advocate for Lehigh on the national stage.

In 1957, he played the press like a violin in advocating Lehigh for being "ranked in the top 20 teams in the nation" and "No Ivy League team, save Dartmouth or Princeton, would give us much trouble."

He also campaigned for a new rating between "major" and "small" colleges where Lehigh seemed to fit - a cut above the Oberlin's of the world, but a step below the Michigan's.

When the NCAA moved to Division I-A and Division I-AA in 1978, it could have been seen as "Leck"''s ultimate vision coming to fruition.

"Leck" liked to have smart students. "A boy has to be a student and athlete to be on our team." "With boys of higher intelligence, teaching is a snap," seeming to channel much of what the Patriot League aspires to be today, only now, with male and female athletes in all types of sports.

Though nobody knew it then, 1961 was to be "Leck's" last season coaching college football, though he'd remain to serve the university in the form of athletic director.

But in 1961, the goal was a winning season and perhaps a Lambert Cup, and it was Colgate standing in the way.

1960 saw Colgate reappearance on Lehigh's schedule after a 38 year absence, where a trip up to Hamilton was remembered by Bob Voccolo '60 many years later.

"I did the game and Jeff Cox '62 did color for the '60 game in Hamilton," he said to me, noting that it was Jeff that cleverly used the word 'toothpasters' when referring to Colgate's squad, a term that was also used in future years.  "The weather was cool, clear, crisp with a heavy frost; the game was one-sided and press box nothing like Taylor's great facilities.  The band and several hundred lehigh fans traveled there; Colgate's coach [Alva E. Kelly] was gracious and saId to me something like this......'we didn't make a nickel inside your tackles'."

In 1961, at 4-1, and still considered a "major college" and a step above a school like Lehigh, the 4-1 Red Raiders had, by early November, recovered from an early 34-0 drubbing by bitter local rival Cornell.

They had given up a grand total of 8 points in four straight games against some very good Eastern teams of the time: Bucknell, Harvard, Princeton, and Yale.  (With their clean sweep of H, Y, and P, you could make the argument they should have had the celebratory bonfire, lit by the winners of the Harvard/Yale/Princeton games, up in Hamilton.)

And with Eastern superiority at stake - and, perhaps, serving as a bit of a preview of their future battles for titles in the Patriot League - they tussled in old Taylor Stadium at the site where the Rauch Business Center now stands on campus.

"The main Engineer objective was the containing of Raider QB Dan Keating," the B&W reported.  "The speedster, who enjoys bootlegging, made havoc of the Big Brown defense until the last quarter, when the brown-jerseyed players racked him up behind the line of scrimmage."

Behind the Wing-T behind a grinding running game and some precision passing from QB Walt King, "The Crasher," FB Boyd Taylor did a lot of the hard work on the first touchdown for Lehigh.   (No relation to Taylor Boyd, the current Brown & White sports reporter and passionate Baltimore Ravens fan.)

After a pitch to RB Pat Clark would give Lehigh the lead, Colgate would respond with their own scoring drive, with Keating "providing the whole show," as it was reported, "as he bootlegged from 15, 19, and 2 yards, and passed over CB Charles "Jake" LaMotta's head to TE Jared Northrop for the first Colgate score."  The two-point conversion gave "the toothpasters", as it was reported, an 8-6 lead.

After Taylor would convert another long Lehigh drive, and the Engineers would miss their two-point conversion try, it was 13-8, and Colgate drove deep in Lehigh territory.

But it would be LaMotta, though, with the play of the game that would give the Engineers their first win over Colgate, secure a winning season for "Leck" in his final year of head coaching, and also play a pivotal role in Lehigh's first Lambert Cup since 1957.

It would also drive a stake through the heart of Colgate's season, as they would lose big to Syracuse 51-8 in RB Ernie Davis' record-setting senior year, and to Rutgers 26-6.

"What seemed certain to be a second Colgate score," the B&W reported, "ended very abruptly as LaMotta found it fit to put himself between a Colgate receiver and Keating and provided the crowd with the thriller of the day."

The thriller was an intercepted lateral that LaMotta would return 90 yards for a score - the longest interception return ever for Lehigh at the time - and would end up being the difference in the game.

You wonder if, after playing this second game in a four-game series with the Red Raiders, "Leck" wanted to make this a regular thing - especially after such a hard-fought victory in November of 1961.