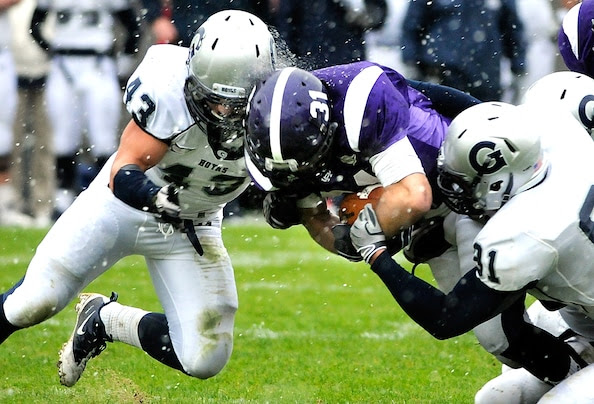 Head coach Andy Coen tried to say it, in a preseason article in the Morning Call. (subscription required).

I tried to say it, in a preseason piece on the Hoyas called: "Know your 2011 Opponents".

Even the casual blogger Casual Hoya said it, too, with a refreshingly ill-researched homer piece about how the Hoyas were going to compete this year for the BCS National Championship.

The consensus was: Watch out for Georgetown.

Now, in Week Eleven of the college football season, the first winning record for the Hoyas since Georgetown joined the Patriot League isn't simply a feel-good story about a team that's spent more than a decade losing a lot of football games.  It's a story about a Patriot League Championship game, taking place in Bethlehem, for sole possession of the title and autobid.

And for the Hoyas, potential payback for last year.

Going into this season, Georgetown head coach Kevin Kelly, who came into the Patriot League the same year as coach Coen, had exactly nine career wins.

Should his Hoya team win at Lehigh this weekend, he'll double his entire win total - and achieve a boatload of other milestones, too.

In a game that surprised many last year, Lehigh was trailing 7-6 at halftime to the Hoyas, before settling down and putting away the Hoyas 24-7, clinching the Patriot League championship and autobid in the process as well.

"A Georgetown team that was different from the other Georgetown teams challenged Lehigh almost the entire way," I wrote last year.  "I was incredibly impressed with this Hoya defense - one of the best Lehigh has faced all year."

It couldn't have sat very well with the Hoya players last year either as Lehigh celebrated with the championship trophy at Multi-Sport Field in the heart of Georgetown's campus.

But if the Hoyas are focused on that, they're not saying.

As senior DE Andrew Schaetzke told the Washington Post, this is a different team than in years past.

“We have to reiterate that this is a different team,” he said. “This is a Georgetown team that has beat Colgate and Holy Cross and Lafayette this year. We’re a different team than the teams have come before us. Now just have to go out there and play like it.”

Since losing to Bucknell 35-18 back in October, they have most certainly played like a different team.

The Hoyas have tallied five straight wins, allowing no more than 17 points in each of their five wins.  Furthermore, if you discount a late Colgate touchdown and a late Fordham touchdown when the outcomes of those games were no longer in doubt, you could say that Georgetown has given up no more than 10 points per contest.

Equally as crucial is the confidence that five consecutive wins brings a team.

“We know what to expect — a great team,” QB Scott Darby said about Lehigh after their win over Fordham last Saturday. “We’re looking forward to the challenge. We’ll have them schemed up. They’ll have us schemed up. We’ll be playing for all the marbles. Couldn’t ask for anything more.”

Is Lehigh ready for the Hoyas this Saturday - for all the marbles?

Game Notes and Injury Report
Some incredibly good news came down from the injury front this weekend.  Last we saw senior CB Gabe Johnson against Holy Cross, he had an air cast on his ankle and needed to be carted off the field.  But according to the Express-Times, the injury was not as bad as had been feared and he had been able to practice part of this week.  Considering it was assumed by many to be a season-ending injury, his "questionable" status this week is something to be joyful about.

If Johnson cannot go, the play of senior CB Kenyatta Drake says without a doubt that the Lehigh defense will not miss a beat if that's the case.

Other than that, Lehigh seems very healthy as they enter the most critical game of their season.

Weather Report
A weather report in Bethlehem very similar to last week, as the Weather Channel is calling for partly cloudy skies and a high of 56 at around gametime.  Wind, at 14 mph, could play a part in the game as well.

From the Lehigh Side
"Georgetown has a great team right now," senior DE Ben Flizack said in the pre-game comments this week. "And we do also.  It's going to be a great game.  It's probably going to be another dogfight, like the Holy Cross game."

"We have to make sure we don't have any turnovers," sophomore WR Sergio Fernandes-Soto said, "and not shoot ourselves in the foot.  We have a chance to win the Patriot League Championship here, at home, and we're excited about it."

What's also very exciting is the prospect of breaking 10,000 fans in a non-Lafayette game - something very much in the realm of possibility, with nice weather and a championship on the line.

"I'm excited it's at Goodman Stadium, I'm expecting to have a great crowd there, and I'm expecting the students to come out and do a great job cheering our guys on," coach Coen said.  "I'm really looking forward to kickoff."

A Word on Georgetown
"There is a lot of optimism and the bar has been raised for our program," head coach Kevin Kelly mentioned in his first note on the 2011 football season. "as the hard work put forth by our coaching staff and student-athletes has begun to show on the field. Two years ago, we had a real tough year, last season we won four games and this year we hope to double it or more. Our goal is now to win the Patriot League and bring a title back to the Hilltop for the Georgetown football family."

Eleven games into the season, the optimism about the program has proven to be extremely well-placed.

"We're just trying to build a tradition here at Georgetown," senior SS Wayne Hemuli told me at Patriot League Media Day. "Everyone knows on the East Coast knows Georgetown for basketball, and we're tyring to bring back football tradition to the school, get everybody excited about it, and hopefully we'll win a championship. I've been working on reaction speed, and overall speed, this offseason. "We have a saying, it's 'one man, one job.' It's focused on you. You play your position, the linebackers do what they need to do, the defensive line does what they need to do, and the secondary does what they need to do, and everything falls in line."

Nobody would mistake Georgetown for a football school just yet, but it's pretty telling that a significant number of fans that would ordinarily go to the Hoyas' men's basketball opener versus Savannah State are instead trekking to Bethlehem to see if Georgetown can complete a truly unbelievable turnaround: from an 0-11 season two years ago to a Patriot League Championship this year - something that actually has been done once before in Patriot League history, by Colgate's Dick Biddle in 1997.

On Georgetown's preview of the game, the contest this weekend is even billed the "Patriot League Championship Game".  Any thoughts that the DC faithful will instead be watching a basketball game that will be over by halftime should be very much put to rest.

LFN's Drink of the Week
With a larger number of Hoyas invading Murray Goodman Stadium than usual, it's worth making this weekend's "Drink of the Week", well, a Hoya.  One part orange juice, 2 parts gin, and 3 parts Ginger Ale, it will hopefully be the drink Hoyas fans use to comfort themselves after they lose the Championship game, so it's probably best to drink a couple before the game, not after.