How will the Pac-N, Big Ten Plus, And Big East/Midwest Look? 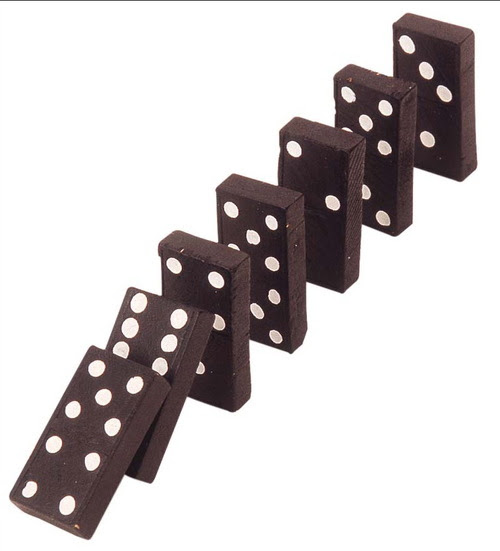 Where might other dominoes fall?  Will the Big XII cease to exist - or survice?  Will the Big East crumble, too - or expand by four (or more) teams?  Will the Mountain West become a Western counterpoint to the Pac-N - or see its best teams lured to that conference?

It's a crazy, dangerous world out there right now, especially if you think you have all the answers on FBS conference realignment. But it's a good time - with a break in the action, sort of - where we can see where this all is could lead. It could be the start of megaconferences, the involvement of Congress - or not much else. (more)


The first question is: what do we know?  Colorado and Nebraska left the Big XII.  Why did they do it?

That answer is simple.

They looked at their individual situations, and the world around them, and said, "At least two really big-money conferences are out shopping for new members.  Our cut of the TV deal from the Big XII isn't nearly enough that our rightful place in the world of collegiate athletics is represented.  By going to the (Pac-N, Big Whatever) we will probably increase revenue - by quite a bit - and no longer see all the money and prestige that is rightly ours sucked south to Austin."

So they've moved.  That's done; over with. What's left to look at is what's left in their wake.

Will the conference formerly known as the Big XII soldier on?

The answer to this question to me is - and this will be a surprise - maybe.

Why?  The answer, unsurprisingly, comes from Texas.

Like Colorado and Nebraska, Texas will do what is best for themselves.  And they have a pretty damned good deal in the Big XII.  They have a TV deal which gives them, well, basically all the money.  They're the epicenter of the conference.  Recruiting?  They don't even need to recruit; folks come to them.

The hot rumor is that Texas will go to the Pac N - with their friends, or not - , but the SEC is trying to put a monkey wrench in the proceedings by pursuing Texas A&M, dangling a check in their faces and giving the Aggies something to think about.

But the Longhorns won't move for just any old reason.  Sure, if they can move with all their important rivals from the old Big XII to some other conference - without changing their revenue stream - they'll be fine with that.  But they won't move just for the sake of moving.


And it makes no financial sense for Texas to go to the Pac Ten if they don't take along their leaguemates.  They won't get the lions' share of the money if they're they and Colorado are the only team that goes, and losing Texas A&M will lose them the biggest rival of all.  Losing them will hurt their brand badly, and they know it.

If I'm Texas and I'm faced with "going it alone", why don't I just try to make the Big XII work instead?  Grabbing UAB and Southern Miss from Conference USA perhaps isn't the best option, but they at least will make the SEC squirm and bring a championship game back to the discussion.  It would hurt to put Oklahoma and Oklahoma State in the North, but a Texas/Oklahoma championship game would be something to behold.

Best of all from Texas' perspective, they would still hold onto all the money.  They'd still have Kansas baksetball, "history", and rivalries while they craft their own television network to make even more money.

So the answer to the original question is: The fate of the Big XII is in Texas' hands.  Fortunately for the remaining schools of the Big XII, it is not at all clear if moving to the Pac Ten, Big Ten or SEC alone is going to be worth it to Texas.

If the Big XII survives, what happens?

You have to believe that at least a few more "dominoes" will fall.  But not as many as folks would like you to believe.

Look at the Big Ten for starters.  They now have twelve teams - enough for a lucrative championship game.  They didn't get who they really wanted - Notre Dame - but they did expand to a new captive market, and got a school with appeal well beyond Nebraska's borders.  This move makes them money.

But how compelling really is expanding beyond twelve?

No conference has successfully made sixteen teams work in football.  Twelve is sometimes pushing it, but with a championship game the fans seem at least somewhat satisfied that some champion has emerged from it.  Sixteen?  Hasn't worked yet, and it may be impossible to keep everybody happy.

My educated guess: if the Big XII survives, they grab two or three more teams so they can keep their championship game.  If they lose Texas A&M, they go after UTEP or Houston, and they go after UAB and Southern Miss regardless.

The Big Ten stops at Nebraska.  They can make money with this arrangement.

The Pac-N becomes the Pac Twelve by grabbing Utah.  They expand into a new market, keep the balance more or less the same, and gain a championship game out of the deal.

That stops the merry-go-round in the BCS conferences, but to fill out the rest of the FBS moves: The WAC's Boise State replaces Utah in the Mountain West.  Conference USA grabs North Texas, Middle Tennessee State and maybe Arkansas State.  The Sun Belt, already getting South Alabama in 2011, replenishes with FCS schools Jacksonville State, Texas-San Antonio and possibly Lamar.  The WAC expands with either Sacramento State, or gets a trio of FCS schools: Scaramento State, Cal Poly and UC Davis.

(If you're a fan of FCS football - interestingly, you probably are rooting for the Big XII to implode.  If the Big XII survives, you could see six or more FCS teams try their hand at low-rent FBS football.)

What if the Big XII implodes?

If this happens, it will almost be due to the fact that Texas thinks it's better to bring themselves and the neighbors to the Pac N,making therm the Pac-16.  If that happens, it will leave five great schools - Kansas, Kansas State, Iowa State, Baylor and Missouri - scrambling for a new conference.

The Big East has pretty much everything that Kansas and Missouri could ask for - great basketball, and a BCS slot.  Geographically it might be a stretch, but Louisville isn't that far away and if enough of the neighbors want to stick together it could work out incredibly well, especially in hoops.

But twenty basketball teams?  Can that work?  Not easily; but that argument will probably be lost with the idea of getting Kansas, Georgetown, Syracuse, UConn and Villanova in the same basketball conference - boy, that's a lot of former national champions and big-time coaches under the same umbrella.

But where things really start to get hairy is if the SEC and Big Ten decide that they need to get to sixteen teams as well.  After all, a sixteen team football conference won't any longer be a parlor game - it will exist.  They may feel the need to keep up - or get squashed by the steamroller.

The Big Ten could go after Missouri and Rutgers to get to fourteen.  That, in turn, might force the Big East to get creative, almost forcing them to get Kansas, Kansas State and Iowa State.  And the SEC won't stand still in this.  They'll make a play for Virginia Tech and maybe even Baylor.  The ACC, in turn, might also try to poach West Virginia.

What seems clear to me, though, is to see what happens with the Big XII.  If it survives, then the future of the FBS conferences looks pretty clear.  If it falls apart... then it's almost impossible to say what might happen.

Anonymous said…
See that Texas staying with Big 12. Would have been nice if they did it for some ethical consideration. Texas-Pac 10 blew up only because Texas was charging too much.Gekko alive and well in the BCS. Thank God this round is over, but the greed will resurface I fear.

PL has little to worry about with that issue. Now that it is off the table maybe they'll give us a clue what direction we are planning to adopt.
11:45 AM