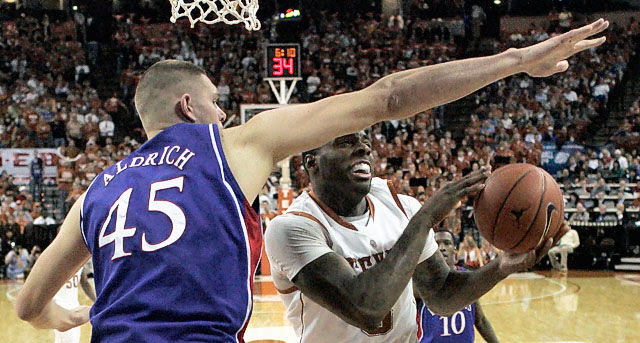 I've been following the BCS/FBS conference realignment craziness with a whole lot of interest, having penned a piece on it for the College Sporting News that basically stated that the chance of a current FCS team making it into a BCS conference was between slim and none, and slim was nowhere to be found.

It's hard to tell which rumors are real and which ones are imagined, but ESPN apparently has some pretty solid sources together (finally) that seem to imply that Nebraska could announce their intentions of being a member of the Big Ten as soon as Friday.

If that happens, and the Pac Ten goes through with their threat to invite Texas, Texas A&M, Texas Tech, Oklahoma, Oklahoma State and Colorado to their conference, there are a lot of teams that might be available for other BCS conferences to poach. The most intriguing of the scenarios? A couple of teams defined by their basketball success... getting offered an invitation by the Big East. (more)

Don't laugh. As senseless as a sixteen-team football conference is, this could be the ultimate destination for two members of the Big XII should the conference break apart.  And when you look at the desperate straits of some of the teams in the breakup, it makes some sense in a senseless world.

If you ignore geography, rivalries and such normal drivers of collegiate sports, inviting Kansas and Missouri would make so much sense in the Big East it's downright frightening.

In basketball, the Big East would be going from strength to strength.  The Jayhawks have arguably the longest, most storied basketball history on the planet and are three-time NCAA champions.  Missouri has never won the NCAA championship in basketball but has a history of deep runs in the tournament as well.

In addition, both bring some credibility in football, too.  Kansas football has long been second banana in the state to basketball, but they do have a 50,000 seat stadium that is going to be expanded soon.  Missouri's football team is also of the "close, but no cigar" variety - but with a stadium capacity of 71,000 and a stong hold on the St. Louis television market, they still hold a whole lot of positives for a conference who wants to rescue them.

And it's not like the Big East doesn't have schools that are close by.  Louisville is already a member, and would have instant rivalries with the Jayhawks and Tigers.  Can you imagine two Louisville/Kansas basketball games every year?  Though they are very far apart, it would seem to be a very good basketball match.

It's not like Kansas or Missouri would have a lot of options, either, in this brave new world.  The Big Ten and Pac Ten don't want either of them.  (Missouri, as of last week rumored to be on the Big Ten's short list, is now rumored to be way down their list of priorities.)  Conference USA - they clearly punch at a higher wieght than that.  The Mountain West?  Really, this is a viable option?  With the Big East, Kansas and Missouri keep their BCS spot and actually improve their basketball standing immensely.

Such a move for the Big East would make them unquestionably the No. 1 basketball conference on the planet; would give them ten football members, helping with scheduling, and if they, say, offer Dayton and Xavier as well, they could separate into divisions and make a play for two autobids to the NCAA tournament.

Could the Big East actually be sitting prettiest because of the actions of the midwest and west?  In a world with conference realignment craziness, perhaps - dare I say it - this makes some sense?

[UPDATE: An intriguing tweet, if true, adds a lot of credence to this happening:]

acmartin1: I have it upon good word the Bill Self is talking to Jim Boeheim about joining the Big East if the Big 12 dissolves

[UPDATE 2: Another intriguing tweet from an, um, well-known guy in the college basketball world:]

DickieV
Kansas in the Big East makes lots of logic -r u kidding me as the college scene gets absurd with each moment!

ngineer said…
Not much to say. They went three rounds longer than anyone ever thought. Just ran out of gas. Chicago clearly was, overall, more skilled and the last two games, quicker. Lack of depth on defensive end finally came home to roost. Overall, with two mediocre goalies, who played beyond their abilities in the playoffs, Flyers finished very strong. With Laviolette getting time to upgrade they could be a force next year.
2:05 PM