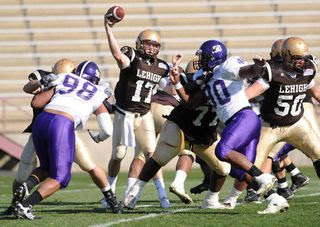 Here are the press links for this weekend's heroic effort versus Holy Cross, but before I get to that I just wanted to reiterate how great it was to see Murray Goodman come to life this weekend. Have I become a sudden fan of moral victories? No; but I still feel like this effort was a step in the right direction. There were lessons in this game for the underclassmen, and I'm hoping those lessons will pay dividends next year.

As he tried to come to grips with another agonizingly close loss for his Lehigh football team, coach Andy Coen scanned the stat sheet late Saturday afternoon in a tiny media room at Goodman Stadium and noted the similarities of the final numbers.

The difference wasn't on the sheet, but rather it was in the person who walked out of the same room about 15 minutes earlier.

'This is what you play for,'' said senior QB Dominic Randolph, who has rewritten the Holy Cross and league passing record book during his storied four-year career. ''A close game like that, coming out on top, it's a lot of fun. You remember wins like this.''

''Our kids played awesome - …they played hard, physical, they did what they needed to do to be right there to beat the No. 13 ranked team in the country,'' Coen said. ''Our defense contained one of the most high-powered offenses in the FCS.

''But the end was disappointing. I just feel bad for our kids. That's how I feel. That's the emotion I have right now.''

"We did a good job varying the coverages the whole game and we had him rattled for the most part," said senior LB Troy Taylor, who had a team-high nine tackles, one sack and a forced fumble. "We didn't give him what he wanted to do. I think it gives us great confidence.

"The whole year we've been able to get after the QB consistently."

"Our line was getting great pushes up front and making great blocks," said junior RB Jay Campbell, who rushed for a career-high 131 yards on 21 carries. "I was able to read the holes pretty well today and ran a lot of inside zones -- one of my better plays I like to run.

"We had practiced it (the pass) for a couple weeks and today was the first opportunity to use it."

"There's frustration," Coen said. "I'm sure our kids are frustrated. Sometimes I'd love to be hugging them after a win. How they keep coming back I'm so proud of how they keep doing that.

"I've been on the other end of a lot of these games in my career, getting paid back now, maybe. I want to keep being positive it's just happening a lot. It's tough."

Brown & White: Lehigh Football Fall to No. 14 Crusaders at Home

Sophomore WR Jake Drwal said the amount of penalties was the only negative thing he observed.

"We knew this week was going to be tough and that we'd have to keep the penalties down in order to compete. That holding penalty on the goal line really hurt us," Drwal said.

In addition to his first career passing touchdown, Campbell had a career day on the ground with 131 yards on 21 carries. The tail back credited his offensive line.

"I've always had confidence in our O-line, but as the weeks have gone on they've come together as a unit," Campbell said. "We're going to keep believing in ourselves, keep believing in the team and just never quit."

Senior DL BJ Benning said, "The record doesn't really show it, but we can play with anyone. We just need to keep preparing to win and fighting until the last play."

"I wasn't surprised with how [Lehigh] came out," Holy Cross head coach Tom Gilmore said. "They came out and made plays. I said before the game that I'd be happy getting out of here with a one-point win. It doesn't matter how much you win by as long as you get the job done and we did just enough to get the job done.

"Senior LB Matt Cohen is a great football player and B.J. Benning gave us trouble at times. Their secondary did a good job of locking down on our receivers. They changed things up well. A play would be there and we'd come back to it again, and they would have it defended the next time."

Gilmore did not hear the final score of the Lafayette game -- The Leopards' won an all-timer 56-49 over Colgate -- and said he didn't want to think about the matchup with the Leopards next weekend right away. "I'll probably start thinking about them on the way home," he said.

Lehigh had 171 yards rushing against Holy Cross, its second best total of the season behind only the 219 registered against Georgetown.

Junior tailback Jay Campbell ran for a career-high 131 yards. He also threw a TD pass on a halfback option.

''We were getting a great push and great blocks up front and our fullback, senior FB Anthony Fossati, also did a great job,'' Campbell said. ''I was able to read the holes well today. We ran a lot of inside zone, which I like, and it was working well.''

Troy Taylor led a spirited defensive effort with nine tackles, including a sack and a forced fumble on Holy Cross All-American quarterback Dominic Randolph. Randolph was out of sync all day.

''We played our hearts out on defense,'' Taylor said. ''Unfortunately, we came out with a loss, but we eliminated the third best passer in the FCS and didn't allow him to do what he wanted to do. We made him throw off his back foot and took him out of his game.''

And they'll try to do the same against Skelton.

''This gives us great confidence,'' Taylor said. ''The whole year we've been able to get after the quarterback consistently. We've had more sacks (28) than we've had in recent years. That lets our DBs know they don't have to cover the receives for eight seconds. We're either going to get a sack or force a bad throw.''

“We turned it around when we needed to,” said Randolph, who had thrown six straight incompletions on two prior possessions and turned over the ball on an interception and a fumble the two possessions before that.

“We had a few mishaps here or there,” Randolph said.

Much of the trouble was the pressure generated by Lehigh’s pass rush. The difficulty Holy Cross receivers were having getting off the line of scrimmage against Lehigh’s aggressive press coverage added to the struggles.

“It was tough getting open and finding spots,” said Holy Cross junior WR Freddie Santana, who caught two passes on the decisive drive, including the 4-yard touchdown toss with 1:03 left.“Their defensive schemes had our number for a while,” said Randolph, who finished 23 of 37 for 247 yards, with two touchdowns and one interception. “It was a little frustrating. They were throwing off the timing a little bit.”