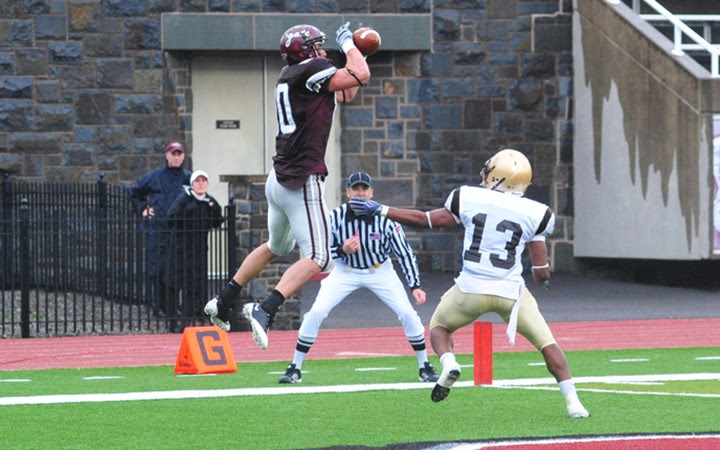 There was precious little coverage in the papers this weekend on the game, especially in the upstate New York area where all we have is the AP mentions that a game was played in Hamilton and that the 7-1 Raiders still are very much in the hunt for a spot in the playoffs and maybe the Patriot League autobid.

The local papers also mostly ran modified versions of the official Lehigh recap, though to their credit the Morning Call did do a follow-up piece today as well. Even the student-run Brown and White didn't mention the game at Colgate this weekend, which leaves my recap as the only independent record of the game this Saturday.

"I thought the kids fought hard, they competed right to the end there. But we need to win one of these close games,” Mountain Hawks head coach Andy Coen said after the game. “I thought junior QB J.B. Clark did a nice job running the offense today. He knew we would ask him to tuck the ball and run with it a little more than usual and he handled that very well. We had a chance there at the end, it was a bang-bang play but we couldn’t pull it out.”

The frustration is apparent, but Coen, his staff and players can only press on and work toward turning things around.

''Obviously, it's disappointing to be right there and have a chance to win it, or at least tie it, late in the game and not be able to do that,'' Coen said. ''We continue to struggle to find a way to win the close games. I thought we had things figured out, but it didn't happen. It was a somber locker room and a long ride home. And that's the way it should be when you lose a game like that.

''That wasn't the case a few years ago. I remember a few years ago when we lost at Colgate, by the time I had gotten back in the locker room after talking to the media, you would have thought we had won the game judging by the reaction. But these guys took it hard. They care. They have kept a good attitude through a tough season.''

Coen said that the defense, which had been stout through most of the season, gave up ''too many big plays for the first time in a long time.''

''It was our best day with no turnovers and not having as many penalties, but that was a big one there before the end of the half,'' Coen said. ''And then we had a sack on the next play and didn't get any points out of it. We didn't protect the quarterback as well as we've been. We did a lot of good things up there, just not enough.''

But even though things appear gloomy, Coen has no doubt that the players will continue to compete.

''The attitude, the work ethic, their desire has been there all year,'' he said. ''It has just been a play here and there. We've got a lot of young guys playing, and that's not an excuse, but some of them are still growing into their positions and learning.

''We know it doesn't get any easier this week with Holy Cross, but I know our kids will respond well as they have all season.''

Anonymous said…
Oh I see...nice quotes as usual. We need to find a way to win one of these close ones. Yea try to win jut ONE of them. I especially liked the characterization of the team in the locker room and the bus ride home. The players care, unlike a couple of years ago when he apparently had players that didn't care. Way to ingratiate yourself with the alumni. Or..was he eluding to what was left of Lembo's recruits. I think that crap is way old. Anybody see where ELON is ranked? I did.
9:42 AM

Anonymous said…
Any coach who continuously brags about a youth movement is running a JV program.

Our competitors definitely are not.

Some Lehigh coaches in other sports have done this in ancient times, always with no success.

Anonymous said…
Three to go (games in the "Coen Era") that is.

Andy will find a way to lose three more "close ones" before joining Mike Cooley as the last LU coach to be sent packing.

IMO, a decent coach (and staff) will take this exact same talent and win at least 6 or 7 games next year.


You heard it here first.

Anonymous said…
Gee, you guys sound so sure Coen will go. I'm not so sure. I don't think the Holy Gast gives a hoot about athletics and I think Andy has pics of Joe Sterret he doesn't want anyone to see. I could see Lehigh figuring they'll save some money re-signing Andy after another crummy season.
6:07 PM

Anonymous said…
Unless you alums have some real money to withold from the program, Coen will be back for a least another 2 years.
11:10 PM

Anonymous said…
Gawd, I hope not.

I still have confidence that Joe will do the right thing.

He sees what we see and hears the deafening silence of empty seats and lack of interest.

And those comments at the last press conference - they sound like a dispassionate observer, not a head coach.
8:51 PM