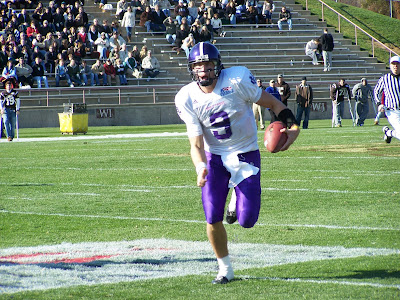 I was there to see what was almost the biggest Lehigh upset in two decades.
The No. 13 team in the country. The Mountain Hawks written off by pretty much everyone, including me. And Lehigh didn't just put forth a great effort, they very nearly shocked the world, pressuring Holy Cross senior QB Dominic Randolph intensely and making the superhuman Crusader QB look a lot more like a regular human being.
You got the feeling this one would be different from the opening drive. Lehigh got the ball first and junior QB J.B. Clark led the offense right down the field, punctuated by big runs by junior RB Jay Campbell and a 14 yard TD pass to junior TE Alex Wojdowski.
When the Lehigh defense would stop Holy Cross' initial drive at the 7 yard line, forcing the Crusaders to settle for a short FG, you got the feeling that this was going to be a game.
It would never be beyond one score all afternoon, with two ties and four lead changes. Against a team that had scored over 30 points six times, over 40 points four times and over 50 points once this year, Lehigh held them to ten first-half points.
The playbook was emptied -we discovered that junior RB Jay Campbell is a lefty, as he took a pitch from Clark, and then completed a pass to a wide-open Wojdowski to tie the game at 17. Aside from his first-ever TD pass, he had a fantastic day running the football with 131 yards on 21 carries as well and was the engine that made the Mountain Hawks go.
There were big 4th down conversions, including a big one to junior WR Craig Zurn to keep a drive alive. There was a 4th and inches on our own 30 yard line - that junior RB Jaren Walker converted.
The defense, led by senior LB Troy Taylor's 9 tackles and 1 1/2 tackles for loss, were effective in disrupting Randolph all day - and Taylors forced fumble in the 4th quarter (recovered by senior DT B.J. Benning) led to a 4th quarter lead against the Crusaders - after a drive ended in a 38 yard FG by freshman PK Jake Peery to make the score 20-17.
"The whole game he was running with the ball out," Taylor said in the post-game press conference. "I just used a move we've been working on since training camp to dump the ball out for a big play in the game, give our offense the momentum."
"The Lehigh kids came out and they blitzed," a relieved Holy Cross head coach Tom Gilmore said after the game. "They did a good job changing things up. One time, a play would be there, and the next time we'd get back to it, they had it defended. I thought they did a good job changing things up."
And yet Lehigh, with their first fourth-quarter lead against a team not named Bucknell or Georgetown this year, couldn't make the big 4th quarter play to actually seal the deal and pull off the upset.
Twice, the defense stopped Randolph, with senior LB Matt Cohen in his face the whole time, pressuring him. But twice the offense couldn't drive to get that score that would have sealed the deal. You can only give Randolph so many opportunities to beat you, and the third time for him was the charm.
"Coach McKenzie told me [at the beginning of the last drive] 'forget what whatever you've done, just go out there and play football'. It kind of brought me back down to realize that it's just a game, and we were a little more loose during that last drive. That gave us the opportunity to move the ball."
Two big passes to Holy Cross junior WR Freddie Santana - one a 32 yarder to get into Lehigh territory, and his final catch on the afternoon - a catch in between two Lehigh defenders, crunching him, but still holding onto the winning score - were what ultimately did Lehigh in this afternoon.
The effort wasn't as good as pulling off the upset of the decade, but still ought not to be fogotten. It should be an important building block for this young team for the future. If Lehigh plays like this the last two games, they will have a chance to win both.
"There's a lot of young kids playing, and they're good players," coach Coen said afterwards. "JThey keep working hard every week, and they've gotten better. "
I was at the game two years ago when Randolph and the Crusader offense put up 59 on Lehigh, and I remember the post game interview. That afternoon, Randolph didn't have a lot of respect for the Lehigh defense, and it showed - he said that they could do "pretty much what they wanted to all day". And to be fair, Lehigh's defense didn't earn the respect.
This weekend, Lehigh got the respect back.

Anonymous said…
Respect is great and the team clearly played its best game of the year. The fact that Lehigh always plays up to better competition IS a testimony to the character of the players, that trait has been the same going back to the 90s. I can't even recall LU not playing a hard fought game against superior competition since I've been following it closely. Jay Campbell emerged as a very good back today, Zurn was solid and strong, the D played incredible up to the end when they were gassed. HC is a very good ballclub. But with all the positives, many of us are still scratching our heads at the clock management and play calling at the end. Respect is a good thing. Our 2009 record is not. A couple more games in the Coen era, mercifully.
10:40 AM

Anonymous said…
I wish I could agree with your enthusiasim for the LU administraton to have the guts to make a change.

I dont see it happening as long as the present AD is in place. I think they will insist on some changes in the staff, that any good coach would have made anyway, but as for Coen, they will give him 2 more years and hope the rest of the League falls further into the crapper and Coen can shine.

If they were serious about maintainng this great football tradition, this guy would have been gone a year or two ago.

I have no idea how this AD can get up every day and look at himself in the mirror and think he is leaving a positive legacey to his name at LU.

The excuses have to stop, the writing is on the wall, are you coherent Mr. AD?
12:21 PM

Anonymous said…
I'm just wondering....Why do we have a "young team" every year?

Why do we have 50% dropout rate in every recent recruiting class by the time they are juniors?

TEN freshmen have played varsity this year! That's half the JV starting lineup. John Whitehead (remember him?) used to get upset using half that many.

As this trend continues, so does the trend of losing.

Two more years? Ten more years? The treadmill of mediocrity (or worse) will continue year after year as this pattern of participation continues.
5:30 PM