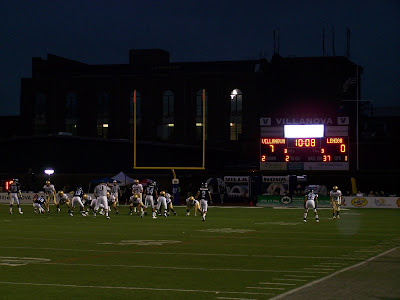 The 38-17 defeat was not a surprise to a lot of people, but it was striking to see the Mountain Hawks line up against what we want to be someday.

Lehigh got to look up close at a team that could very well win the national championship in FCS this year. The Wildcats didn't play the cleanest game in the world, but it was more than enough to put away the Mountain Hawks who fall to 0-2.

Villanova never trailed, but the complexion of the game changed in the second quarter when, down 17-7, junior RB Jaren Walker appeared to be down before hurting his left ankle and dropping the football. But the play wasn't whistled dead - and Villanova freshman DE Marlon Johnson picked up the loose ball and returned it for a crushing touchdown to go up 24-7. It was eerily similar to the play last year against Villanova when, up 13-7, senior LB Osayi Osunde stripped the ball from junior QB J.B. Clark to be returned for a TD and take a 20-7 lead they would never relinquish. (Replays appear to bear this out.)

Oddly enough, the team who lined up the most in the "Wildcat" formation wasn't the team that is currently making it famous. It was the guys in Brown & White doing it the most, lining up freshman QB Michael Colvin in the Wildcat and getting 26 yards, or 4.3 yards per carry in his 6 rushes.

Junior QB J.B. Clark largely put his accuracy problems from the first game behind him, going 20 for 31 in almost exclusively short-and-mid range passes. And sophomore QB Chris Lum came in during mop-up time and got his first action of his young career, getting a late touchdown.

Unlike last week, Lehigh held onto the ball longer than Villanova, but that was more due to the fact that the defense had their hands full with the large array of offensive weapons the Wildcats had at their disposal. Wildcat senior WR Matt Sczcur went over 100 yards rushing on 5 carries, most coming on one a 75 yard scamper that set up their first FG on the night. (Sczcur's performance reminded me of Marlon Brando in The Godfather - he didn't show up in too many frames of the movie, but when he did, boy, did you remember him.)

Junior QB Chris Whitney also ran every which way on offense for Villanova, too, to the tune of 130 yards. And worryingly for the Mountain Hawks, it's the second 300+ yard rushing team against Lehigh already this year.

Villanova was very impressive up close. They are big. They know their systems down cold, even if they were a little sloppy in execution. And they have a lot of answers to a lot of questions of both sides of the ball. They most certainly have the capability to win it all.

They're going to cause a lot more pain to teams all over FCS when all is said and done. But even while realizing that, it wasn't a very fun evening to be a Mountain Hawk fan in the wet confines of Villanova stadium tonight. Lehigh is (putting it mildly) not where the Wildcats are at this juncture. Lehigh is a work-in-progress - trying to learn from what the Wildcats already have.

Anonymous said…
If that team last nightis ranked third in the nation,I say keep your scholarships!

Unless they where "toying" with us all night (I'm sure they were to a certain extent) by not blitzing our QB and letting the secondary get some coverage practice in, not throwing the ball much, I for one was not impressed with their one demensional(may be 2 demensional) offensive attack. Any D coordinator with half a brain would have a spy on him all night and shut down his big run capability.

Our guys cant tackle a 5'9" running back, or a big loppy QB!

We have no play makers on offense and I cringe every time our QB throws the ball more than 10 yards down field. Why the lopsided play calling? how about a little more of the run game to take time off the clock!

The O line
Pass coverage
9 more games until the Coen era ends!
8:16 AM

Anonymous said…
don't jump ship yet! Beca, Liberty and Freedom high schools are on next years schedule. I think we are the prohibitive favorites in all 3!
10:31 AM

ngineer said…
I think it is safe to say that the Princeton game in two weeks is going to be huge in terms of impact on the rest of the season. How we play against the Tigers will set the table on how the rest of the season can go with Harvard following. The bye could not come at a better time. Besides getting some dinged up people healthy, there is plenty of time between now and then to do some major self-assessment.
9:41 PM

Anonymous said…
I spent Saturday night fending off the damp weather to watch an even more depressing result at Villanova Stadium. The final score was very deceiving. 'Nova went "vanilla" with backups for much of the second half or that game would have gotten well out of hand. It is disheartening to watch our program decline from annual tournament appearances (with wins over the Villanova, Delaware and Richmond) to being relegated to the status of "warmup opponent". How bad does it need to get before the university ends the Andy Coen Experiment? Back-to-back losing seasons and recurring losses to Lafayette were apparently not enough. Now we are forced to sit through another year without progress or purpose. Here's hoping that the weather improves.
6:55 PM