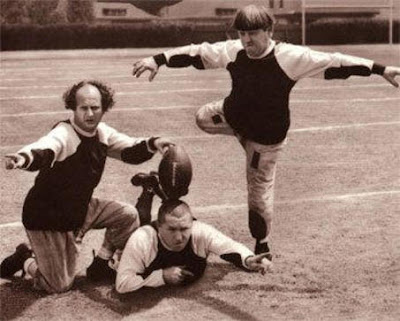 It's just over 24 hours to gametime, and Lehigh's being given no chance to win by, well anyone else in the media.

Of course I'm no exception to this rule, predicting a 40-10 Villanova victory here and here. But I'm not even the only blogger who predicted a whitewash: Fact over at the Nova Facts Blog has as one of his keys to the Lehigh game as "showing up":

As long as the 'Cats bring their B-Game, they should beat Lehigh and if they bring their A-Game, you might see a bunch of people dressed in brown heading to their cars early. It is worth noting that Villanova destroyed the Auto Bid from the Patriot League in the playoffs last year.

These two Pennsylvania teams couldn't have had more opposite first weeks. Lehigh couldn't get its offense going in a loss against Central Connecticut State, while the Wildcats defeated FBS opponent Temple with a last-play field goal.

And, as I mentioned in my preview, the student paper, the Villanovan, thinks the Lehigh game will be a nice "tuneup" for Villanova:

"I'm sure that our players are thinking 'well, we just beat Temple and Lehigh is 0-1,' but you can't get lulled to sleep," Villanova Head Coach Andy Talley said. "You can't fall asleep at the switch and look past this game. You got to be ready to go."

Although Lehigh does not have a ton of fire power, they have several key players returning this season.

There is a disparity in talent between the two teams, and Talley is leaving it to the older players to show leadership and maturity to motivate the Wildcats.

The game against Lehigh will provide Villanova the chance to tune up before their tough upcoming conference games.

While the local press didn't make any predictions (though I'm still waiting for Keith Groller's pick on his blog), the Morning Call, Express-Times, and Brown & White made it very clear about the challenge of the task at hand (as did coach Coen and senior DT B.J. Benning):

This Villanova team, coming off a win over Temple, is much better than the '06 version.

''We all like to make the comparison to 2006, but this is a much better team we're seeing,'' said Lehigh coach Andy Coen, who got his first win in charge of the Mountain Hawks in that 2006 visit. ''This is a veteran team, more seasoned.

''They're all back from last year when they only lost to West Virginia and James Madison, including one on the last play of the game,'' Coen said. ''Of course, having gone down there a couple of years ago and having beaten them probably works against us, too, because we're not going to sneak up on them.''

"Obviously, we need to be more balanced on the offense, and that's going to be a huge challenge given the opponent we're playing this week from a physical standpoint," Coen said. "We did create some big plays at times and I think we'll have that capability all season long, but we need to be more consistent in what we're doing."

"They have a sound kicking game," Coen said. "Even though they have a young placekicker (freshman PK Nick Yako) and new punter (sophomore P Dominic Scarnecchia), their cover people are very physical. That's an area we really need to win to have a chance in this game."

"He makes the offense go," Coen said of Whitney. "When they made the change at QB a year ago, that's when they started to play well. He is a good decision-maker and can make plays with his feet -- not only running the ball but keeping the plays alive to find receivers open downfield."

Senior DT B.J. Benning, who was named last week's Patriot League defensive player of the week after making a career-high 12 tackles against CCSU, said the team is going to have to play much better this time if it wants to win.

"Last year we played well in the first half, but in the second half we made too many mistakes and lost the game," Benning said. "This year we're going to have to play hard all four quarters if we want to win."

Finally, Keith Pompey of the Philadelphia Inquirer says for the Wildcats to avoid a letdown:

The home opener has all the ingredients for a Villanova letdown.

The third-ranked Wildcats (1-0) are coming off Thursday's last-second 27-24 victory over Temple in the inaugural Mayor's Cup game. And on Sept. 19, they face Penn, another Philadelphia rival.

In between, Villanova will host Lehigh this Saturday at Villanova Stadium.

Will the Wildcats look past the Mountain Hawks? Villanova coach Andy Talley doesn't think so.

"The only thing that you can do is look at history," Talley said Monday. Three years ago, "we watched Lehigh lose to Albany" in a season opener.

Back then, the Mountain Hawks looked pitiful, fumbling six times. Most people expected Villanova to beat Lehigh easily the next week.

"They came into our game and looked great," Talley said, recalling the 31-28 loss.

What I wouldn't give to see a repeat of that scenario... I'd even be happy with a hard-fought close defeat, with the team representing Lehigh like winners.

The Marquee FCS Game on TV Nationally
Interestingly, with the McNeese State/Appalachian State game only being televised in the North Carolina area, and many local stations getting blacked out of the Richmond/Delaware tilt (on the Comcast Network) and the Montana/UC Davis game (on Comcast West), the Lehigh/Villanova game is the only FCS game which will be carried on a true national level tonight at 7:00 PM on Fox College Sports.

Illinois State and Illinois play on the Big 10 Network and North Carolina Central takes on Liberty on FamilyNet - but neither of them involve a Top 25 schoo. Meanwhile, "that school in Easton"'s game against Georgetown will be carried locally on a variety of local stations that carry the Lafayette Sports Network - but it's not a national game.

You could almost call this game the national FCS "Game of the Week".

Weather Update
There's a sun break in the middle of the afternoon, but it's still looking like a 40% chance of rain at the stadium tonight. Wind might also be a factor - 5 to 10 mph.

Anonymous said…
where did you find the picture of the offensive coaching staff?
3:25 PM

Anonymous said…
the season is over can we talk about the future? Did you see how Gilmore is loaded with LU grads on his coaching staff? I know i did.
12:18 AM