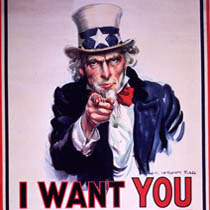 It's not all that long ago that a post like this would be just complete and utter speculation about something I knew nothing about. Who's getting recruited for the Lehigh football class of 2011? How the heck would I know? I could say "I want you!", just like this classic Army recruitment poster, but I wouldn't have anything backing up my feelings.

Nowadays, we definitely have more information on possible recruits than ever before, thanks to the "magic of the internet" and the Lehigh message board and websites like scout.com who spend all their time tracking possible college recruits in all sorts of sports. Most of the players on scout.com are commits to the "big boys" like Penn State, Michigan, and, yes, even Boise State. But if you are willing to take the time, you can also get information on recruits that are thinking about Lehigh as a place to continue their education.

Longshots? Hard to say. Superstars? It's way too early to say. But it's valuable information at a time when it's hard to come by, and for thirsty Lehigh fans like myself, any droplets of moisture are welcome. First, let's do a mini-breakdown of what I think Lehigh's needs are, and some of the names that are floating out there in the ether with the Lehigh name attached to them.

Need #1: Defensive Line. Losing two starters (DE Paul Fabre and NT Eric "Big Daddy" Rakus) and one impact player (DL Royce Morgan) means that there is an immediate need for bodies on the defensive line in 2007. With eight returning "D" linemen, not only will it be an interesting spring for Lehigh, it means that freshman will have a real chance to make an impact early in their careers.

Need #2: Sedale's "Heir Apparent". Backup QB Mike Probst graduates this year, and the QB combo of Sedale Threatt and Kevin Marshall graduate next year. We have rising sophomore QBs Jesse Sanchez and Chris Bokosky in the wings, but you can't have too many QBs at your disposal. A third QB might be just what Lehigh needs - and someone who could compete for a starting job in 2008.

Need #3: Beef on the "O" Line. It's my philosophy that you can't have enough bodies in the trenches, and with four seniors graduating on our "O" lines, the need to beef up with a great class of linemen will be crucial. Rising senior (and LFN favorite) OL Jimmy Kehs will anchor the line in 2007, but the other bodies in the trench for this year and beyond are up for grabs.

Need #4: Center & Long Snapper. Laugh if you must, but two of the most important unsung positions are graduating this year - C John Reese and LS Eric Rakus. One of the top priorities in the spring should be finding the new snappers, and a great way for a freshman lineman to make the travel team would be to be either.

Need #5: Running Back Our starting running backs are solid right now with rising juniors Matt McGowan and Josh Pastore, but ask Montana about the importance of having a stable of great running backs in camp. (They lost preseason all-American RB Lex Hilliard in the preseason last year.) Running back depth is key - and we need to have the next great RB in this year's class.

Now that the primary needs have been identified, it's time to share with you some of the names that are floating out there with Lehigh's name attached to them. Remember, this is only speculation at this point - none of these are commits!

QB Chad Cheek (East Ridge HS, Clermont, FL) 6'3, 192lbs
Notes: Speedy QB that is also being pursued by Georgetown and Columbia. Could be an RB?

Anonymous said…
I've followed the career of Hildabrandt up here in the Poconos and the kid has put up some awesome numbers. Started as a Sophomore and really loves to check the ball around. Has had a weak supporting cast the the last two years, but he's still shone. As a Soph I really expected the kid to become a Division 1 prospect, but injuries and a weaker team surrounding him has hurt his development. Would love to see him come to Lehigh though.
4:33 PM

Anonymous said…
Reese may have another year...was out the whole year either his first or second season.
4:50 PM

Anonymous said…
Kyle Adams on DL may also have another year after losing all of his jr. year because of a back injury.
4:52 PM

Anonymous said…
Recruiting prospect running back Antonio Walcott has an enormous stride for such a little guy.
His 40 time is just quick enough at about 4.5. But what really enabled him to rewrite the PSAL record book was the separation speed made possible by the remarkable stride. Once he hits the secondary and shifts into top gear, all pursuit just simply evaporates.
5:03 PM