What Is The Rivalry, Anyway?

There is something about Eastern Pennsylvania that keeps drawing people back.

I see it all the time - from expats who move across the country, but still watch the Eagles on Sundays.  Once you've been to the Lehigh Valley, warts and all, it seems like some sort of gravitational pull yanks you back to the area.  You can live in the Yucatan, but a part of your heart remains in the Valley.

It's a strange thing, too, because the Lehigh Valley has never been a paradise on earth.  Even from the times of the English and German Moravians setting the area in the 1600s, it's been a place of contrasts - the well-to-do living and working next to manual laborers.  The prosperity of Bethlehem and Easton ebbed and flowed, but what always was true was that both were cities that were a big mix of different types of hard-working people.

Lehigh University reflected Bethlehem, a town built on iron and steel, a town that wanted to pretend that you could go from the foundry to the boardroom but in reality became a town of the working underclass and a Brahmin class of some of the richest board members in the world.  It was a town built on industry, and Lehigh was intertwined with it, especially the steel industry and all its innate unfairness.  Eventually the old Steel way of doing business changed, because it had to.  But something remained of that past.

Lafayette College reflected Easton, a town built on the ingenuity of the early English settlers that wanted to pretend that the stratified ways of England, American-flavored, was the way to operate.  In reality, the town of Easton was changed by the canals and the strategic importance of the Delaware river next to it.  The number of workers needed to build the trains, dig and work the canals, and Easton became Easton, and Lafayette was intertwined with it.  Eventually the old English way of doing things changed, because it had to.  But something remained of that past.

Maybe it is that, the fact that Bethlehem and Easton were places where things were made, that is a part of the reason why this part of the country has so much gravitational pull.  It isn't easy to feel a kinship to a place that houses banks, or chicken processors, but walk around Bethlehem or Easton before The Rivalry and you get the sense of a place that was built by regular people.

It is that DNA of both areas that infuses both colleges, and is what gives college football's most-played Rivalry something that can't really be matched by any other sports rivalry. 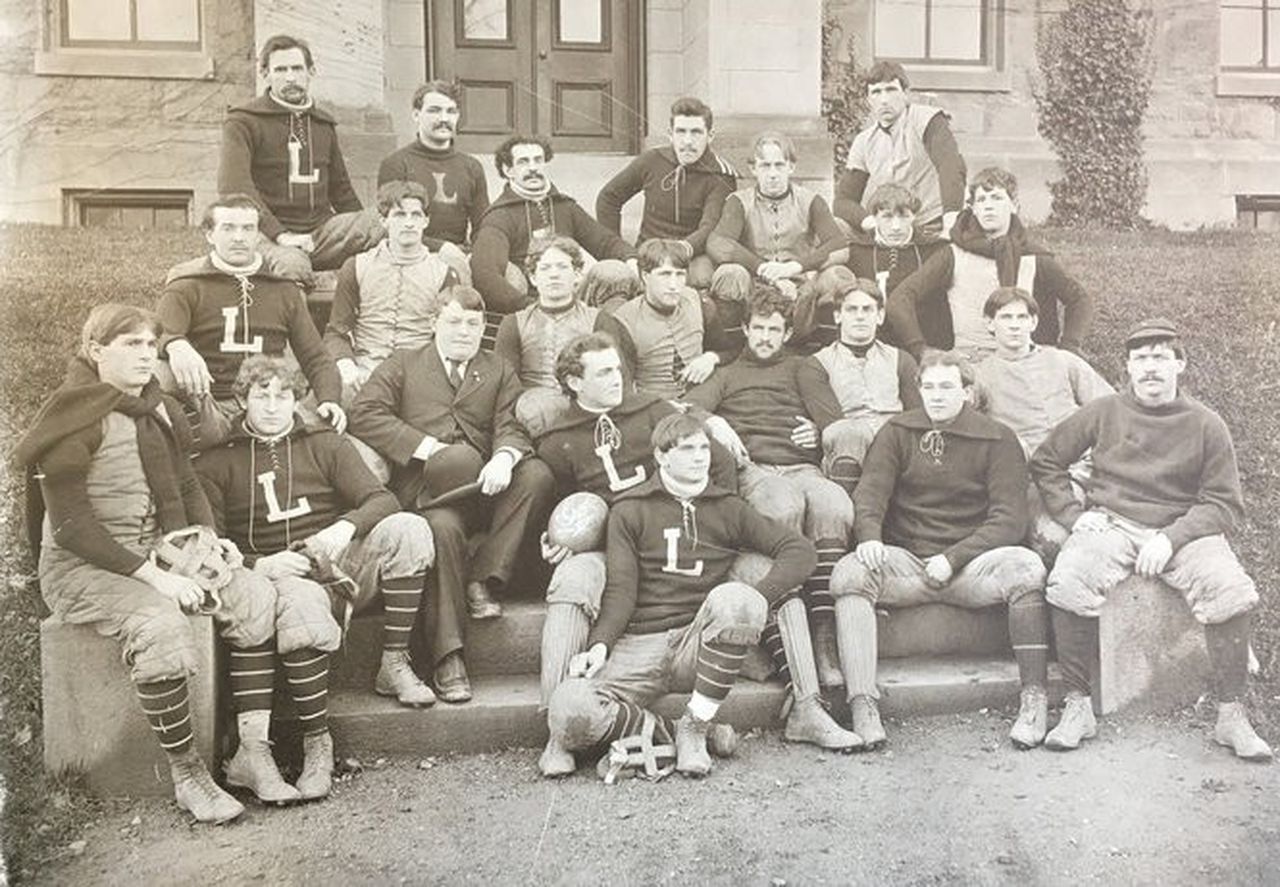 150 years ago this year, Princeton played Rutgers in what is mostly considered to be college football's first intercollegiate competition.  Inspired by Rutgers, Princeton, Yale and others, Lafayette founded their college football program in 1881, playing their first games in 1882, only thirteen years after that very first game.

By 1884, Lehigh got in the act, and soon threafter, Lafayette's Theodore Welles challenged Lehigh to a game, and The Rivalry was born.

Lafayette and Lehigh started their Rivalry in a time when the game was in its infancy, with a ball that more resembled a soccer ball, with fluid rules, and with students of the schools acting as officials.  There was no media to tell people what an athletic rivalry looked like, so they invented it.

The Rivalry grew for several reasons.

The sports media of the time spread stories about the depth of animosity that brewed between them.  Stories of questionable calls, fights in the stands and even occasionally fans interfering with opposing players spread through the papers, starting in Bethlehem and Easton and eventually making its way nationally.  It helped that they generally played two games against each other yearly, with the players and fans of each team able to just hop on a train in the morning and be home that same night.  Most games had as many fans as could take off enough time to catch a game; Lafayette and Lehigh games were always packed and almost always included "extra-curricular activity".

Another reason was the nature of the industrial cities of Bethlehem and Easton.  They were cities where people made things did a lot of manual labor, and on their rare times off they wanted a distraction.  Football was one such distraction.

Finally, and this is an underappreciated aspect, is that the students who played in this game tended to develop into hugely successful men.  Lehigh and Lafayette athletes became some of the first CEO's of their day.  When they moved to New York, Baltimore, or Boston, the gravitational pull of the Lehigh Valley kept pulling them back to campus, especially for the big rivalry football games.

The world has changed immensely from then to now, but each generation of Lehigh and Lafayette student has taken traditions, started new ones, and dusted off others.  Institutions that were once only the domain of mostly white males became more diverse, adding people that made the school look more like international magnets of learning today rather than the colleges where private school kids ended up after graduation.

But there is still something of that tradition, the gravitational pull that brings people back to campus.  The Rivalry between Lehigh and Lafayette has become international in ways, but at its heart it is regional.  There are other rivalries that are between similar institutions, like Army and Navy, Harvard and Yale, or Georgia and Florida.  But none of those games seem to capture that warm feeling of a really good high-school football rivalry than Lehigh and Lafayette.  Sometimes, "big" doesn't mean "scale", and in Lehigh and Lafayette they haven't forgotten that.  They cultivate and nurture that fact that they are two nearby teams that compete in everything and are similar enough and different enough to bring the energy.  They know it doesn't need anything artificial to sweeten it up.

So this week, enjoy the Rivalry.  Enjoy all the events around both campuses in the run-up to the game.  Feel the energy of both campuses at the end of some really tough courses as the students cut loose.  Read the signs; watch the bed races; see a bonfire.  Head to Murray Goodman to see the Rivalry that pulls me back, like a gravitational force, every year.

I wrote a book about The Rivalry which is available on Amazon, detailing the early years of how the Rivalry formed.  If you're interested, check out the link here.

Anonymous said…
It's your father's rivalry. Students go for the tailgates and couldn't care less who wins.
2:45 PM

Douglas said…
I would agree that the students of today's private schools like Lehigh don't care about their teams sports as much as we did while in school. Even in sports hot beds of schools in Southeast Conference, getting the student body involved in a big way is tougher than it used to be. So it's up to the schools to gin up the excitement that used to be a given to anyone at these schools. That excitement we felt as students stayed with us as we got older and could support our Alma Mater on a regular basis.. Like a lot of things, tech ruined these sorts of things.. Just as easy to watch and follow online than go into the stadiums after the tailgate..

I'll be attending a tailgate hosted by my fraternity on Saturday.. It will be interesting to see how many of the actives go to the game itself.. With the game on local OTA TV, you can tailgate and watch it on a big screen TV from an antenna.
3:39 PM

Really nice, short piece that adds some additional context to the Game, or Rivalry, as you've (mostly) successfully rebranded it. It strikes me as curious as to why you felt the need to add two "politically-sensitive" comments (which add nothing to your narrative):

"especially the steel industry and all its innate unfairness"

"Institutions that were once only the domain of mostly white males became more diverse, adding people that made the school look more like international magnets of learning today rather than the colleges where private school kids ended up after graduation."

Neither of these points have anything to do with the Rivalry. Period. Full Stop.

Still, a nice piece, but it would be better without the editorializing.
3:44 PM

Anonymous said…
Hawker, Agree on the nice writeup. But disagree on your comments about Chuck's supposed "editorial commentary." Those items you mentioned were two very observable FACTS. It was not commentary or editorializing. Unfortunate you are offended by the reality of an enlightened world world, and how we see the role of diversity and corporate America today. Historical facts and observations that are taught today in these 2 very institutions. I really appreciate Chuck giving a broader historical context to the game, and enjoyed reading his book...but still waiting for the sequel!
2:20 PM

Anonymous said…
LUHawker,
As Chuck pointed out, the popularity of the Rivalry in earlier times was largely due to the working class residents of the Bethlehem/Easton area, a well needed distraction from the sooty industrial life for many. My father and friends had so many tales and stories of who attended these games, and the differing socio economic backgrounds of the students and locals. Fraternity Dandies from Lafayette College in top hats with their flasks, amongst the Bethlehem locals- quite an interesting contrast. Not unique to the Rivalry, but interesting for the reasons Chuck mentioned.
2:29 PM