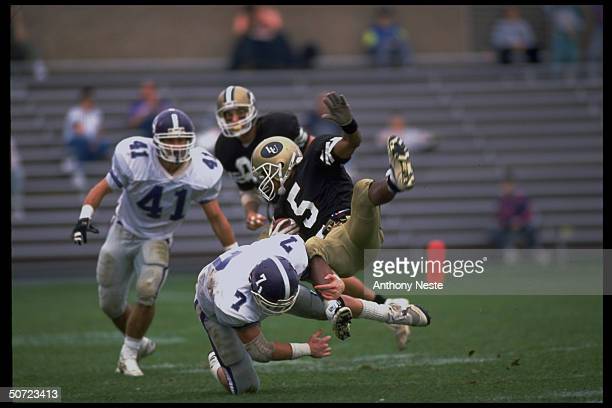 If you're planning to go to the game, great! It's at Murray Goodman Stadium this Saturday at 12:30PM.

If you can't make it to the game, it's is available to watch or listen in a variety of ways.

The local radio broadcast, which starts an hour before kickoff and sets the table for the day's game, can be caught on your AM dial on Fox Sports Radio AM 1230 or 1320. Matt Kerr, Mike Yadush, Tom Fallon and Matt Markus are on the call this Saturday.  (I also am hearing that there is going to be a pair of special guests, quite possibly, during the pregame, whom I can't wait to hear from.)

If not, you can stream the game over the internet, or over the air through a variety of Stadium Network channels.

Two undefeated teams in @PatriotLeagueFB clash this weekend on @Stadium! It's going to be a good one! @NCAA_FCS

This week's broadcast is Stadium Network's Game of the Week, and you can click the link above to get directly to the live stream where Matt Martucci, Dave Owens, and Morgan Uber are on the call.

You can also access the Stadium broadcast in a variety of ways, via free online streaming services like Roku, your phone, or even a digital antenna, if you have a local network that carries it.  To find out where it plays near you, go here. (You can also watch the hype video in the embedded tweet over and over, which I'm not ashamed to admit I've done.)

For the first time all season, it's time to bring your jackets and hoodies to a Lehigh football game.

Tonight, after the very first frost warning of the fall, the game today will feature a high in the low 50s, and early tailgate temperatures into the 40s.  After a slew of games played in downright Floridian weather, including one played in the dry heat of California, this week finally sees a return of prototypical football temperatures.

As part of Salute to Service day, any first responder (Fire, Veteran, Active Military, Police, & EMS) can claim a free general admission ticket.  First Responders can use promo code THANKYOU at LehighTickets.com to redeem their free ticket. Tickets can also be obtained by calling Ticket Services at 610-7LU-GAME, or by stopping by the Ticket Office.

The Greatest Holy Cross/Lehigh Game Ever

The prospect of two undefeated teams in Patriot League playing in Murray Goodman this weekend made me think a lot about one of the best games I ever attended in person, the crazy 43-42 win between undefeated, nationally-ranked Holy Cross and Lehigh in 1991.  Tied at 7 at halftime, both squads had one of the crazier shootouts ever, with Lehigh executing a now-illegal "fumblerooski" play to take a temporary lead and just missing a two-point conversion pass in the final minute that would have had our student section storm the field.

Recently, I found a video of highlights of the game that will take you back, if you were there.  I know it did for me.

No, no, it's not a spontaneous Smashing Pumpkins reunion.  Lehigh will welcome back its 1979 team Saturday to celebrate the 40th anniversary of its national runner-up finish. In its second year in the newly-formed Division I-AA (now FCS), Lehigh posted a 10-3 overall record, including a 9-2 regular season, capped with a 24-3 victory over Lafayette. The Engineers won at Murray State in the national semifinals before falling 30-7 to Eastern Kentucky in the title game in Orlando, Fla. Lehigh was captained by Eric Yaszemski, Rich Andres and Jim McCormick. McCormick, a linebacker, and offensive lineman Dave Melone were recognized as All-Americans. 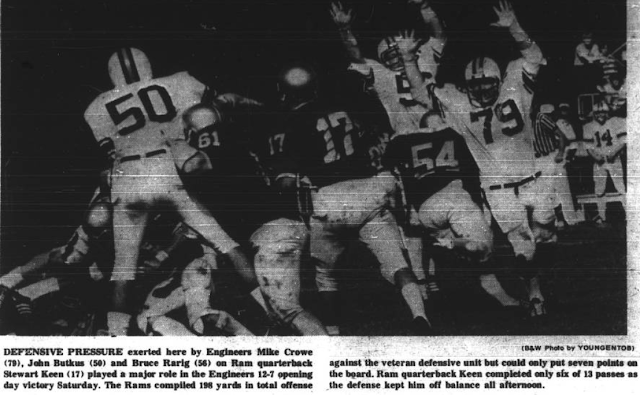 The 1979 Lehigh team had one of the best defenses in Engineer history.  Anchored by McCormick, Lehigh shut out two opponents and held their opponents under 10 points in nine of their thirteen games, and shutting out LIU and Davidson.

LFN's Tailgate Grub of the Week

I don't know where the tradition of the "clambake tailgate" tailgate came from in terms of Holy Cross - Worcester is not exactly close to the "nath shahre" - but nonetheless, the Lehigh diehards for years did a clambake tailgate that was always a big hit. Recently, I discovered that there is a way to do your own steamed clams over a tailgate grill that looks like something I will absolutely try. 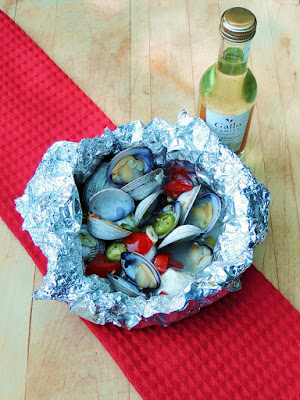 The real genius here is having the grilled French or Italian bread with it to sop up the delicious liquor in the foil pack.  Not sure if it would work with mussels, too, but it might be something I end up trying, too.  Adding a dab of cream, too, is a good possibility.  Read the recipe, and try it yourself.

Since the recipe calls for Chardonnay, let's also make that the Drink of the week as well.  My one rule is to always cook with a Chardonnay that I would actually drink, a Maggio 2018 Chardonnay.  You don't need to spend a lot of money on one, but I picked this one because it's more even.  You aren't looking for spicy funky spice or vanilla flavors for steaming shellfish - you want bold, straightforward white that pairs well with seafood.

Brayan said…
Hello
Thanks for your complete content ..
Also I always check your articles Please send me an article on
buy telegram members
6:30 AM

Anonymous said…
The 1991 game was memorable, indeed. Did you see the blog flashback Lafayette beat writer Paul Reinhard wrote about another game -- Tom Gilmore's return to Goodman Stadium for the first time as the Holy Cross coach in 2005?
9:06 AM

Anonymous said…
I gorgot to include the link.

Anonymous said…
I admit not liking the Gilmore hire but he's proven me wrong. Hoping they keep it going today and he gets revenge over the school who fired him. Apparently there are second acts.
9:35 AM

Anonymous said…
Tough loss! The kids never stopped fighting and the effort is there. Some real bright spots as Bibbens, Allen, Portorreal and Monaco looked solid. The offense is finally coming together now that the main crew has some experience and playing time together. Need to finish strong and be thinking of future with some solid young players that have some real talent like Dambach, Hope, Burbage and Beesmer. Hearing great things about future QB Shapiro, supposed to be the real deal with good size. D made some great plays too, just a couple of missed tackles.
Like the progress though.
5:26 PM

Anonymous said…
Fun comeback season of LU football, even with the loss. The tailgates much taste much better this year in Bethlehem. Team never quits, which is massive change in 2019. HC bottled up the LU young RBs, but all credit to HC and Gilmore's recruits up in Worcester. HC certainly looks like a quality PL team headed to the playoffs, but miracles can still happen for Lehigh. Great HC win over Richmond proves they can play with big boys.
2:33 PM