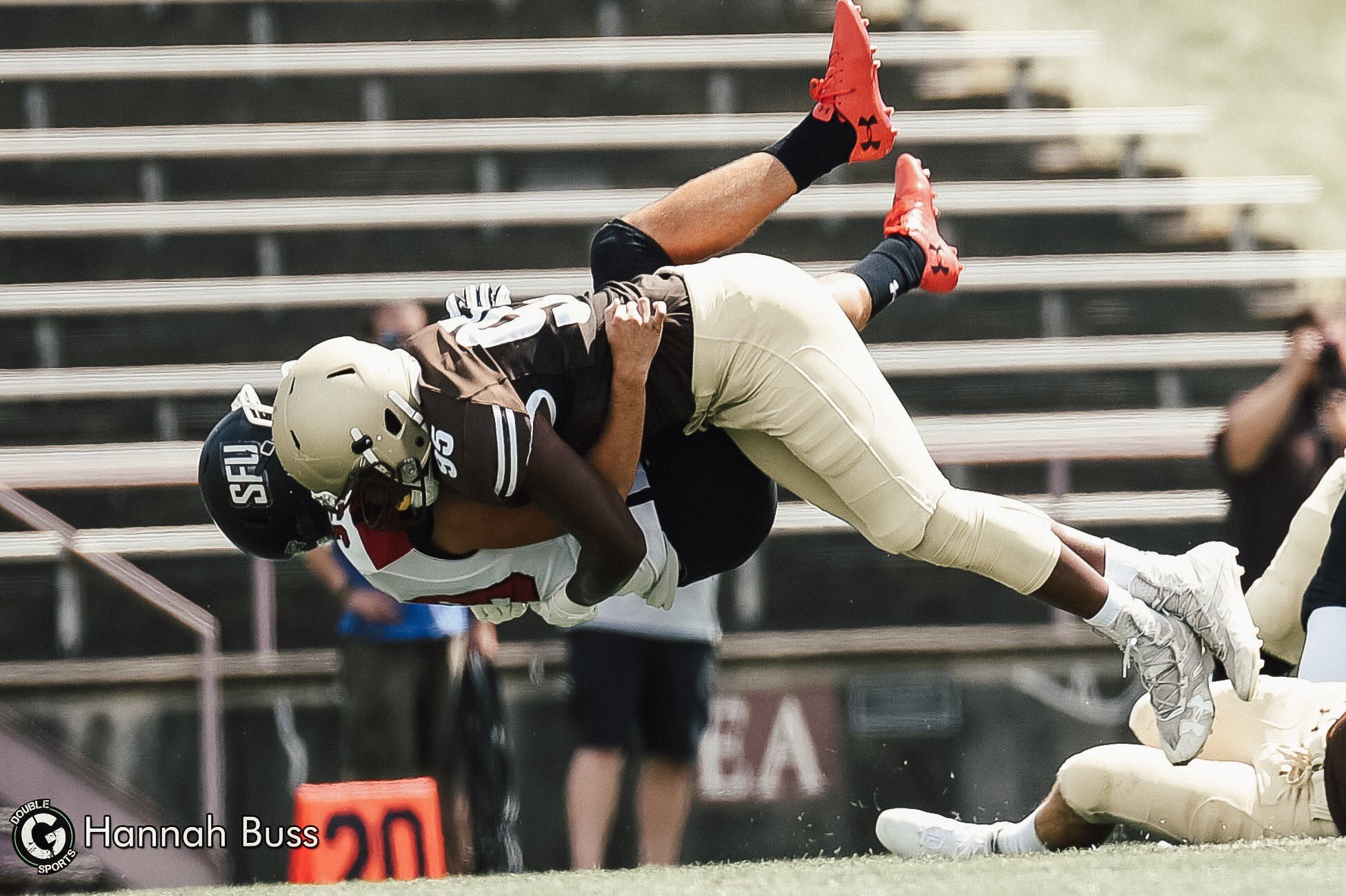 I thought I'd do something a little bit different this year and post five thoughts I had on last week's game.  This weekend, Lehigh lost to St. Francis 14-13 at Murray Goodman Stadium, and no matter how you slice it it was a winnable game that was lost.

Yet it wasn't all bitter aftertaste - there was a lot to like despite the disappointing outcome.

1. The defense had a great day.

One of the most frustrating aspects of this game was the fact that the defense played a tremendous game, holding the Red Flash to 2.2 yards per carry, 5 for 15 on 3rd down conversions, and 0 for 4 on 4th down conversions.  Had Lehigh won, people wouldn't have only been buzzing about DE Davis Maxie's textbook takedown of the punter but also LB Keith Woetzel's great game in the middle, forcing a key fumble to have Lehigh win the turnover battle.  For a unit that has gotten a lot a abuse from the fans over the years, this defense deserves a boatload of credit.

"He has a nose for the ball," S Sam McCloskey said of Woetzel after the game.  "He's just everywhere the ball is and. He actually didn't participate most of camp due ti injury, and we're glad that he was back out there with us today. You can see from games from last year there's a significant difference when he's not on the field. So to have him out there, we know he's going to rack up a bunch of tackles a game."

Having said that, there were a multitude of missed individual plays that, when combined, caused Lehigh to lose the game in the end.  A stellar overall defensive performance saw just a couple of breakdowns that resulted in St. Francis (PA) touchdowns.  Three trips to the red zone by the offense resulted in two PK Austin Henning field goals and one critical interception where even a field goal might have been enough to win the game.  One of the drives in the red zone started first and goal at the 1 yard line, but no touchdown.

"There were a little things that resulted in broken plays," head coach Tom Gilmore said.  "We lost contain on the quarterback a couple of times, blitzes that allowed the quarterback to scramble and then we lost coverage.  Or if we're in a zone, now the zones get expanded and then the next guy has to pick it up on the scramble. It's a team sport. We win plays individually, but we win and lose games as a team. And know they're just a little things. We need to execute better than we did."

St. Francis (PA)'s strategy against Lehigh was to pack the box and stop the run, and they did so effectively, with Lehigh only able to muster 0.6 yards rushing per attempt.  When they packed the box, the coaching staff made the offense go away from a balanced attack to a pass-heavy one, with mixed results.  At times, Lehigh's offense was hugely effective, most notably on the final drive where QB Tyler Monaco threw an incredible pass to TE Alex Snyder underneath, setting up a challenging FG attempt at midfield.  But overall St. Francis' defensive strategy really paid off.

"We just need to find a better way," Gilmore said. "We're trying to take advantage of certain things, and we were just a little out of position, didn't get enough of the piece of a block, or things like that.  Penetration on the D line hurt us on a couple of situations, so you know we certainly can be a lot better there."


4. The punter tackle was great, but the focus can't be on that.

Maxie's punter tackle is clearly going to be on the post-game highlight reel, but that highlight reel is going to be meaningless unless there's a lot more wins on the docket.  It's rare that such a bitter tasting loss has such a sweet moment in the game like that hit, and - confession time - I might be responsible for 1,000 of the 1.1 million views that clip has had on Twitter alone.  But in the end, it's just a moment in a game that ended in a loss.  Getting too caught up with one Twitter clip at the expense of the rest of the season would be a huge mistake.  It will be a challenge for the coaching staff to balance the bitterness necessary to get better with the obvious greatness of that moment.

"When you wake up tomorrow, you have to put it behind you, that's what you have to do as a competitor," Gilmore said.  "And I think there's some good that comes from it. It really can motivate even more, using that hurt to turn in extra motivation for next time. But bottom line is is you have to put it away tomorrow, and get refocused on the next game.  We'll watch the film tomorrow to correct any mistakes that we made, just make sure guys know what we're trying to accomplish in each play. But you have to put it away, and that's the great thing about a sport. You know you've got the next game, and you can't let one one games result hurt you know in a negative way the following week.  You always gotta get ready it's a one game season every week and that's how you have to look at it."


5. The road, especially the next two weeks, is not going to be easy.

Everyone I've talked to has been talking about how challenging the next two games are going to be.  Villanova, who entered the STATS Top 25 poll this week at 24 after crushing Colgate in Week 0, will once again be a very tough assignment for this young Lehigh team, and after that the Mountain Hawks will have their first trip as a team since 1977 to California to take on UC Davis, who sits at No. 5.  It's the type of assignment that would be challenging for the best of football teams, so in order to have a chance, the Mountain Hawks will need to get things in gear, fast.

Unknown said…
Another long year........3-8 the best.....This program and the Patroit League should

be in Division II. At one time we won our share of ivy and other non-league games.