#Rivalry154 Tailgate Report, And How to Take In The Game

The experience called "The Rivalry", the Lehigh Valley event of the fall, is finally upon us, taking place in Easton at 12:30 PM at Fisher Field.

If you can't make it to the game, you can catch the contest on TV in the Lehigh Valley via two feeds.

The "good guy" feed is the local broadcast on WFMZ 69, with Steve Degler, Mike Yadush, and Will Lewis on the call.  This is also streamed online via the Patriot League Network.

The "bad guy" feed is also locally broadcast on the Lafayette Sports Network on WBPH-60, RCN, and nationally on MASN.  This is also streamed via the Patriot League Network, and Gary Laubach, Mike Joseph, and John Leone are on that call.

You can also catch the game on FOX AM 1230 and 1320, with Matt Kerr, Tom Fallon, Matt Markus and Jim Guzzo on the call, with the most excellent Lehigh pregame show starting at 11:30 AM.  You can get it through your regular radio, listen to the broadcast streamed through TuneIn, or just simply going to the LVFoxSports.com webpage and listening that way.

Additionally, there are alumni viewing parties to watch the game all over the country.  If you can't find a parking spot in Easton to watch the game, you can simply head on over to Bethlehem at the legendary Goosey Gander, order a roast beef and turkey Gombo, and watch the game there.  (Fun fact: a significant amount of my Freshman 15 came from Gombos.)

This 154th edition of The Rivalry will have unmistakably November weather - cold, with highs in the mid-40s, with about 75% humidity.  Winds should be mild, but it's going to be chilly.  Not 1987 chilly, but still chilly. If you've ever tailgated at Lafayette before for a Lehigh/Lafayette game, the one thing I can tell you for certain is to get there early.

Fisher Stadium sits in the heart of the city of Easton, with the Lafayette campus overlooking it and actual homes on the sides.  There are parking areas, like the Markle Parking deck and the Lehigh tailgate areas (essentially behind the Lehigh stands), but they cost money, fill up fast, and parking almost always overflows onto the different roads of Easton.

If you're a student, the buses to and from Taylor Gym are a really good option.  It's about a 20 minute drive and drop you right at the tailgate areas.

Kegs are prohibited at your tailgate, but all your beverages must be consumed from cups.  (This is exactly why the Dead Leopard Punch is such a great option.  See below.)

Be prepared for lines and security as you enter the gates to Fisher.  You can't bring in bottles, cans, and alcoholic beverages, which is to be expected, but you're also not allowed to have "unsportsmanlike banners or signs", "noise makers" or "clothing containing vulgar language".  I'm pretty sure over the years I've seen Lafayette students enter Murray Goodman with all three of those things simultaneously, but here according to the rules they are prohibited. 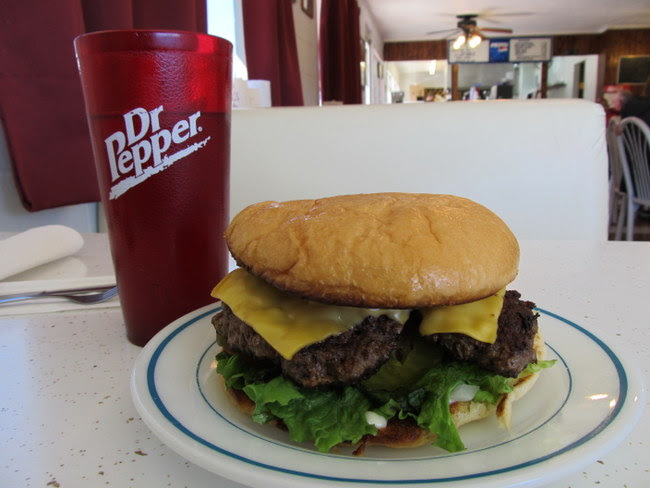 LFN's Burger of the Week #BOTW

Here at LFN, we have a tradition: if a Drink of the Week or Burger of the delivers a victory, it deserves a chance to deliver another victory the following season.

Last year I unveiled the Leopard Burger as the official burger of "Rivalry Week", and it worked so well, we're bringing it back once again.

Before anyone gets bent out of shape, this burger is actually a menu item at the Top Rock Drive In in Alpena, Arkansas, and it's not made of Leopard - it's named after the Alpena high school mascot.

"Its single griddle-smashed hand-patted patty was charred all over its edge, and every crack was filled with American cheese, melted directly onto the patty," a review said.  "It perched on top of thick slices of tomato, a green leaf of lettuce, hamburger dills and fresh chopped onion."

The trick apparently is to fry the Leopard, er, the bun in butter on a hot griddle before putting the smashed patties and the lettuce, tomato and onion on it.

LFN's Drink of the Week #DOTW

The last two years, I repurposed a blood orange mixed drink and called it Dead Leopard Punch.  It worked.

Not too hipster, not too gruesome, it still seems to hit the perfect note for a Lehigh victory over Lafayette.  Even though the name of this is technically Blood Orange Punch - c'mon.  It's not.  It's Dead Leopard Punch.  Everyone knows that.

Serafim Rostiw said…
We are a reputable writing company mental illness argumentative essay topics of international experience with creation of different types of essays for students of all levels of education. We have a team of professional writers of all possible scientific areas. That is why our agency is always confident about our essays being of the top quality. The assignments we provide for our customers always contain relevant information and facts.

Due to a number of factors, the mental medicine is nowadays one of extremely popular scientific directions as long as scientists from all over the world explore the reasons for psychological problems, mental health argumentative essay, and the ways to overcome and treat them. People’s psychological peculiarities, behavior, and reactions to various factors and circumstances are under discussion and are carefully examined.

Tausili Logoleo said…
I hope you continue to have such quality information to share with everyone! For indian cricket team captains, click here!