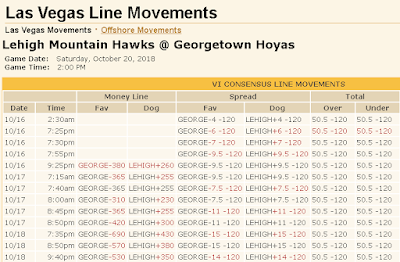 Normally, we don't need to break out the Las Vegas betting lines to motivate Lehigh football players.  But in this very special case, it seems worthy to make an exception.

The people who make a living betting on the outcomes of sporting contests have seen Georgetown, yes, Georgetown, set up as 14 point favorites to beat Lehigh.

Don't believe me?  Check it out.

You know what else is interesting?  The line started out with Georgetown only 4 point favorites.  Over the course of the last 48 hours, apparently, so much money has come in on Georgetown that it has actually swelled to a 14 point difference.

If there was ever a concrete indicator that there are a lot of people that believe Lehigh will fail this weekend, and fail by more than two touchdowns, this is it.

Georgetown head coach Rob Sgarlata knew he had a problem getting consistent offense last year.  That's why he went out and hired veteran offensive coach Rob Spence, who has been coaching offense at many FCS and high-end FBS programs (like Clemson) for the last 25 years.

Spence used to be known as a "run and shoot" guy, but the truth is he, like many college football offensive coaches nowadays, is rolling out more of a spread option at Georgetown, which isn't all too dissimilar to what Georgetown did last season, frankly.  That's not to say though that the offense hasn't improved at all, but something to keep in perspective is Georgetown (116th) is still ranked below Lehigh (108th) in overall offensive yards.  So the spread offense still hasn't put numbers on the board consistently.

The Hoyas have junior QB Gunther Johnson, a transfer from the University of Arizona, as the fulcrum of their offense.  Even though he came to the Hoyas last year, he was not the full-time starter until he had a whale of a game against Lehigh.  In last year's 54-35 loss, he scored all five touchdowns - three through the air (290 yards passing) and two on the ground (71 net yards rushing), so let's just say Lehigh knows the type of athlete they're dealing with.

Johnson's real forte, aside from being a true dual threat, is that he keeps mistakes to a minimum.  That has been huge for this team, as their defense has forced so many turnovers, all the offense has needed to do is to hold onto the ball and not make any crazy mistakes.  Johnson only has 4 interceptions through 7 games, meaning he's done his part very well.

Like Fordham last week, Georgetown enters the Lehigh game truly struggling to get a rushing game going.  Last week sophomore RB Jackson Saffold (221 yards rushing) was the lead ground-gainer for the Hoyas, putting him atop the list of running back options Georgetown has.  RB Jay Tolliver (95 yards, 1 TD) is the change-of-pace back that comes in when Johnson and Safford aren't running the ball.  It's worth mentioning that both Saffold and Tolliver are good receivers out of the backfield, perhaps a throwback to Spence's "run-and-shoot" days, where the RB had to be a great pass catcher.

Part of the Hoyas' issues with offense this season come once again from their offensive line, which give up on average nearly seven tackles for loss a game, even though sacks allowed isn't all that out of line.  C Dominic Scarangella, a senior, anchors this unit.

Georgetown has moved to a base 3-3-5 defense that has shut down many an opponent this season.  The top 12 tacklers listed on their defensive statistics page have at least 1/2 tackle for loss on it, so you know their front six have gotten a huge amount of push on the offensive lines they have faced.  They are aggressive and will come at you at all angles with a variety of pressure from everywhere.

Junior DE Khristian Tate has blossomed into a bona-fide star on Georgetown's D line this season, with 32 tackles and 8 1/2 tackles for loss, including 5 1/2 sacks.  It's no stretch to say that the 6'0, 280 lb lineman from Georgia might be getting some NFL looks this year and next.

Sophomore LB Owen Kessler  moved this season from DE to LB, where he joins sophomore LB Wes Bowers (56 tackles, 5 1/2 TFL) and sophomore LB Xavier Reddick (39 tackles, 5 TFL).  Despite their youth they have been a tremendous front six working with Tate up front.  All except Taylor are underclassmen, it bears noting, and it also is interesting that the three linebackers have combined for 5 of the Hoyas' 13 interceptions on the season.

Junior P/K Brad Hurst is seen as a genuine weapon for Georgetown in both the punting and kicking games.  Averaging 40 yards per punt, he was critical in the Hoyas' winning the field position battle at Lafayette and helped set up the touchdown that put them up 13-0 in the first half.  He hasn't been asked to kick a game-winning field goal yet, but he has the leg for it, booting a 45 yarder this season.

Freshman RS Joshua Tomas has been a pretty big weapon on kick returns, getting a 51 yard return earlier in the season, while S Blaise Brown returns punts.

1. Win.  Normally I would try to do some sort of breakdown of what Lehigh should do to win the football game.  This week, I am not even bothering.  This team, this coaching staff, and pretty much everyone who follows Lehigh football knows what needs to be done.

This team needs to "build a temple", as Al Pacino put it.  They need to find that identity of what they are, and translate that onto the field.  If it's a team that is run by the defense and a field goal by PK Ed Mish is the only scoring in the game, they need to do it.  If it's a team that puts up 54 points on the vaunted Hoya defense, whether through 7 passing TDs by QB Brad Mayes or through 300 yards rushing by RB Dominick Bragalone or some sort of balanced attack, they need to do it.  Whatever it is, whatever that identity is, I don't care.  As long as it ends up as a win, I am good with it, and it will be a step towards building that temple.

This is a week where we're going to learn a lot about this Lehigh team - whether to realistically expect a possible run at a Patriot League title, or whether the Mountain Hawks still have work to do in order to become a program with a winning record.  The level of hard work and the level of execution this week will be very telling - one way or another.

Exactly like last year, this is a show-me game.  What will Lehigh show?

Douglas said…
An interesting question though.. when did they start having point spread lines on Patriot League football games anyway?? Betting lines were never anything available for Lehigh football in the past..
6:09 PM

Anonymous said…
Lehigh has packed it in for the year. This game won't be close.
11:04 AM

Unknown said…
Just one of what I thought were a couple of homer calls. But they were not the reason Lehigh lost. Totally inept offense. I feel sorry for Bragalone. 4000 yards, and no blocking.
7:55 PM

Anonymous said…
This is the first year in some time that I haven't followed Lehigh football and just happened to log on this weekend to see how they've been doing. Well, Im sorry I did and have only one question: Is Coen calling plays again?
8:06 AM

Anonymous said…
Lehigh is painful to watch. Andy Coen doesn't seem to have a clue as to why the team is so bad. He mumbles, and acts like a deer caught in the headlights when he is interviewed. The defense has been horrendous for years. The offense is now even worse. The real question is why has the team not been competitive against non-league opponents, despite the awarding of scholarships, when the scholarship policies of those opponents haven't changed?
6:13 PM