Can you tell that I haven't really wanted to finish this report card for last week's game?

Like a teacher a hour before pacing break, I didn't want to go through the film, the grades, and the play-by-play of the Penn game, but eventually, I did, even though it wasn't exactly pretty.

The true hope with this report card, more than usual weeks, is that it's seen as a springboard to getting to the season that all folks associated with Lehigh will want.  With nationally-ranked Princeton looming ahead this week, it takes on added importance.

OFFENSE
QUARTERBACK: C-
For the second straight week, we get a C- grade from the quarterback position.  With the caveat that it wasn't all QB Brad Mayes' fault, and although the final passing numbers weren't awful (17/35 for 218 yards, not all that different from Penn QB Ryan Glover's 16/31 for 206 yards), the improvement needs to come on 3rd down efficiency (4 for 16) and conversions in the red zone (1 for 2).

As Lehigh fans we are accustomed to sky-high expectations and high-octane offenses, so when Lehigh does struggle on 3rd down there is added frustration.  But there simply needs to be more times, even when backs are against the wall, to make those 3rd and 10s and 3rd and 12s into first downs, no matter how challenging the task it might be.  There were a significant number of those opportunities that were not taken.

In the upcoming weeks, there will be opportunities where the Mountain Hawks need to lean upon their quarterback to win football games.  Lehigh Nation is hoping Brad will seize on that opportunity.

RUNNING BACK: C+
I found myself wondering what might have happened on Saturday if freshman RB Rashawn Allen were able to play.  I still love the idea of Allen and RB Dominick Bragalone in the same backfield.  Unfortunately it was not meant to be, and in my opinion, the overall run game suffered from the lack of that powerful 1-2 punch.  Sure, Bragalone got his 100 yards rushing (barely, thanks to a 22 yard gain on the next to last play of the game), but as a whole Lehigh really struggled to get anything going on the ground consistently and didn't, until that final play when the game was out of reach, give up any big Bragalone runs.

WIDE RECEIVERS: C+
One interesting thing I noticed was that there were times during the game when the Lehigh offense was actually rolling - outside the 20s.  During Lehigh's lone touchdown drive, Mayes mixed up the passes effectively with junior WR Dev Bibbens (5 catches, 100 yards) and senior WR Luke Christiano (6 catches, 83 yards, 1 TD).  But too often that receiving rhythm wasn't there, and it really seemed lost in the red zone, where Lehigh only came away with 3 points.  I have to think, during one of those two red zone trips, one receiver has to get open and make a play somehow.  Hopefully that's a point of emphasis in the weeks ahead.

OFFENSIVE LINE: D-
The numbers are not pretty: 7 sacks (including three in the red zone), 80 net rushing yards, or 2.1 yards per carry, a bad snap that messed up an important possible drive in the 3rd quarter, and several false start/procedural penalties that made the hill harder to climb for the offense as a whole.  Overall the offensive line is still young, but it felt like it was a tough education on Saturday for this unit in general against a defensive front of Penn's that was, as Mayes put it in the postgame, "fundamentally sound and doesn't make mistakes".

It is fortunate for Lehigh that some number of these errors are of the "cleanup" variety - with that being said, Princeton is going to be the exact same sort of tough defensive front as Penn, fundamentally sound, not the biggest Lehigh will encounter or has encountered but one that won't make many mistakes.  The improvement from this game to the Princeton game will be something to keep an eye on. 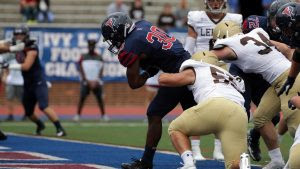 OVERALL OFFENSE: D+
Great Mountain Hawk frustration was in the air at Franklin Field after the game - you could feel it in the humid dusk going to Penn's post-game press conference.  Coach Andy Coen was frustrated - "we need to fix it," he said pointedly.  Brad was in a defensive posture in the post-game as well, understandably not very happy to take questions on an afternoon where he struggled somewhat.

This reporter thinks that one thing that might help overall with this Lehigh offense is a focus on overall discipline - "focusing on the little things," coach Coen said.  I don't think Penn's defense was the best Lehigh has faced, or will face.  But I do think they were more disciplined and had their stuff together better than the Lehigh offense as a unit.  I have a suspicion that if this offense can find that discipline, the Mountain Hawk offense will take flight.

DEFENSE:
FRONT SIX: C+
In many ways, the Lehigh defensive front did their job.  They contributed to Penn going 4 for 14 on 3rd down efficiency, forced punts, and kept pretty good pressure on QB Ryan Glover most of the game.  What they weren't able to do was to get any sacks... or even any tackles for loss against the Penn defense.  That was different than prior weeks, when Lehigh's aggressive defense was also seen on the stat sheet.

But when Penn's offense did finally click, and Penn was able to play tempo, the Quakers were able to connect on big plays in both the rushing and passing game, seemingly getting the defense on the back foot and effectively leveraging that into touchdowns.  One sequence stands out: after Glover found WR Christian Pearson for a 27 yard gain, Penn lined up fast, Glover hiked the ball quickly, and before Lehigh seemed to even be ready he forged forward for a 19 yard touchdown run.  Brilliant play-calling from Penn - that exploited Lehigh's front being on the back heel.  That's a loophole that needs closing.

DEFENSIVE BACKS: B
Once again I was impressed with the secondary at times.  Senior S Sam McCloskey, clearly a huge leader on this defense, once again came up with a great game with 10 tackles and always seemed to find his way where he was needed.  Junior CB Marquis Wilson also stood out with a good game and some impressive passes defensed.  But what kept this from being an even better performance was several big plays, like the Pearson catch, that set up Penn's scores.  Like the front seven, part of the issue seemed to be tempo.  Lehigh needs to play tempo defense better.

OVERALL DEFENSE: C+
Lehigh's defense played well and kept the Mountain Hawks in the game, but didn't get the plays they needed at the end to put themselves in more of a position to win.  And at the end of the day, they did yield 30 points to Penn.

SPECIAL TEAMS: A-
PK Ed Mish keeps doing everything asked of him in the punting and kicking game, averaging more than 44 yards per punt and perhaps opening the eyes of some NFL scouts with his booming 58 yard kick this weekend.  (He also was his automatic self on conversions, hitting an XP and a 23 yard FG.)

DB Jaylen Floyd also had a good day on returns, with a 32 yard punt return.

LFN Players of the Week: