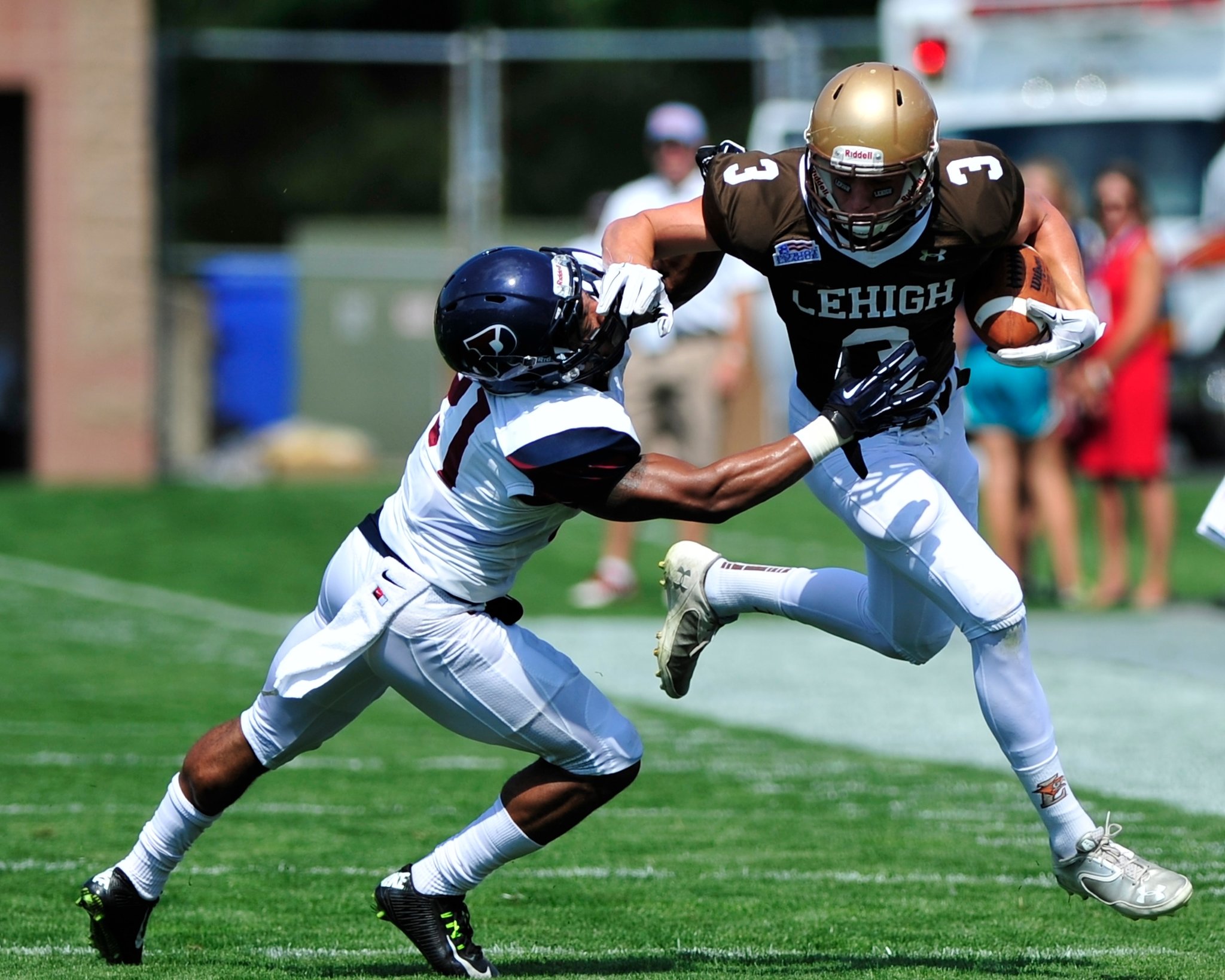 Many Patriot League football fans remember the 153rd meeting between Lehigh and Lafayette, one that ended happily for the Mountain Hawks.

They might remember the MVP performance of QB Brad Mayes, or perhaps the halftime speech by OL Zach Duffy that seemed to spur the Mountain Hawks to victory.

Or perhaps they might remember the spectacular single play of Mayes rolling right and finding WR Gatlin Casey in the end zone to give the Mountain Hawks a lead they didn't relinquish.  It was an incredible play by Mayes, who returns this upcoming year for his senior season, and Casey, who, having exhausted his eligibility at Lehigh, will be playing one more year at Middle Tennessee State.

As great as those individual moments are, though, they are not my biggest takeaway of that game.

Too many Lehigh people forget that Lehigh was down 31-21 at half, and that victory was no sure thing.  And they sometimes forget that so much of that victory came from the grinding of WR Troy Pelletier, delivering huge 3rd down reception after huge 3rd down reception, and grabbing the critical touchdown that cut Lafayette's lead to 31-28.  They forget the absolute receiving clinic he put on against Lafayette DB Phillip Parham - himself no slouch - not only by running perfect routes, which he always did exceptionally in a Lehigh uniform, but by using his body to get open and become a bigger target for Mayes.

It's no easy task to make a 9 catch, 107 yard, 2 touchdown day against your bitterest Rival seem like another day at the office, but that's exactly what Troy did, in his quiet, intense, hard working way.  And that's my biggest takeaway from that Rivalry game.

Many may forget, but I do not.  And this week, in the run-up to the NFL Draft, we are going to find out which NFL teams have been paying attention as well.

Everyone you talk to says the same story about Troy - they marvel at his work ethic.

His ability to out-work teammates and football opponents alike has been a story that has not changed since his freshman year at Lehigh.

"We have stayed in pretty close contact throughout this off-season and I know he has worked very hard in preparation for his pro day, which is not a surprise to anyone given his work ethic over the past four years," Lehigh receivers coach Tim McGorry told me.  "I think his numbers and records speak to how elite of a player he has been in his four years at Lehigh.  In particular his senior year, with losing WR Luke Christiano for the season and Gatlin being out for a good portion of the year, Troy was the focus of several defenses in the pass game and he was able to raise his level of play even higher when we desperately needed him to."

As a student at Lehigh, Troy's ability continuously work hard on the minute aspects of his game always stood out.

“I just try to focus on playing football,” Pelletier told The Morning Call last year.  “I know if I try my hardest and go out here and work hard and do my best, everything will work out.”

But Troy's success didn't come only from hard work.

"An intangible that I think may get overlooked about Troy is his football IQ," McGorry also told me.  "Not only understanding defenses or the technique of the wideout position; Troy knew what we were trying accomplish in different concepts and why we were doing them.

"People talk about Troy's work ethic and ability and those are certainly what make him an elite wideout, but I think his football IQ is what makes Troy a great football player. We were able to move him around in formations quite a bit this year, whether it be in the slot or playing him to the field, that is certainly something that is going to make him more valuable to an NFL franchise, his ability to play and understand multiple WR positions on the field."

"His work ethic and love for the game is something I have never been around, and I think that along with his skill will allow him to thrive at the next level," Brad told me last week.  "I think we [Lehigh] got a steal with him coming here. There is no way he couldn't play for a big time program like Florida State or Michigan or something like that.  I personally believe he should be drafted and has the tools to be a solid NFL guy."

His 105 receptions in 2017 were a single-season record for Lehigh at a school which has produced receivers like WR Ryan Spadola, WR Rennie Benn and WR Steve Krieder, which is no mean feat.

Unsurprisingly to those who know him best, his grinding didn't stop after the Lehigh football season concluded in the playoffs against Stony Brook.

Reflecting a bit on his Lehigh career, Pelletier shared with me which performances he thought brought out the best in him.

"Going back to New Hampshire in the playoffs [in 2016], I had a really good game, a complete game," he told me.  "Stony Brook and Villanova, too.  Against Villanova I had a couple of drops, but it is what it is.  Looking back, I always thought my better games, blocking, and all-around games, were the ones against the better DBs."

That certainly was the case.

The 2016 New Hampshire team featured DB Casey DeAndrade, while last year's Villanova and Stony Brook teams had tremendous talent like Nova CB Malik Reaves and Stony Brook S Chris Cooper.  All three of these guys could be in NFL camps this fall - and Pelletier had some of his biggest highlight-reel catches against those teams, not to mention the game-winner against Colgate in Hamilton last fall, a catch that might have saved a football season on the brink of disaster.

What's Troy Pelletier been doing since the end of the football season?

As hard as it was for Troy, he told me he had to take a couple of weeks after the season to let his body recuperate from the grind of the football season.

"From there, it was right into lifting, because you don't really lift that hard in the season," he said.  "It was hard to get better when I was at home, so I said, 'Mom, I need to go back to school,' so after New Year's I came back here to start working with our trainer here."

Though Troy finished his major last fall - and he stressed to me how important that was to him - he still has classes at Lehigh this semester, which he's had to manage along with his training to get ready for an NFL opportunity. TEST football academy, out of Martinsville, New Jersey, trains a wide variety of athletes for combines.  WR Marquis Haynes of Ole Miss has been training there, as well as Lehigh DB Quentin Jones and other athletes from Rutgers, Maryland and other schools.

Going to TEST also opened up some professional doors for Troy.

"There was a quarterback coach that came in, and he started inviting me to go up to Rutgers to work out with the NFL people there, Giants guys like WR Evan Engram and QB Davis Webb.  We were running routes and doing drills together, teaching me some little techniques and stuff in my routes I wasn't able to learn at college."

It's probably no surprise to those that know him that he spent that extra time working.  Working is what Troy does, and he's always had a professional attitude to everything he's brought to Lehigh.  That's a huge reason as to why the Mountain Hawks offense was so dominant during his time in a Lehigh uniform.

Once the time for working on 40 times and combine technique for pro days was through, Troy was able to get back to what he likes best - getting in football shape and running routes.

"That stuff's easy, that stuff's fun," he said.  "At Rutgers, I invited QB Nick Shafnisky with me up there too to prepare for his camp up in Montreal.  We also work together at Lehigh.  It's been good."

Now Troy will wait to see what will happen this week during the NFL Draft.

"From what my agent tells me, I'm sitting in a good spot right now," he said.  "It would be cool to get your name called, being a late round on TV."

"He has heard very positive reviews from NFL teams," McGorry said, "and I think when Troy gets into an NFL camp all the intangibles that showed over the past four years will put him in a great position to move forward at the next level."

Anonymous said…
Good D2 talent. Best case he has a cup of coffee in the Canadian League.
6:25 PM

Anonymous said…
He did not get drafted...no surprise. Ludicrous article.
6:32 PM

Unknown said…
Of course you’re anonymous because you felt the need to spit on a kid’s dream and skill set.
8:12 PM

สวยพี่สวย said…
i really like football. thank for sharing.