Pelletier, Casey, Mayes, And Lehigh Offense Put On A Show In 59-29 Loss To Stony Brook 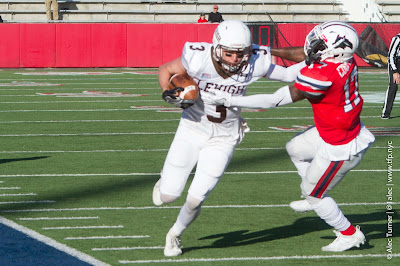 For those that care about these things, Lehigh entered the first round FCS playoff matchup 21 1/2 point underdogs.

And if we're being fair, that was probably the right number.

The Seawolves were 9-2, nationally ranked with seven conference wins in the tough CAA and one of their losses coming to a very strong FBS team in South Florida.  In contrast, unranked Lehigh came into the game 5-6 and only were here because they upset Colgate 41-38 on the road and won enough Patriot League conference games to win the autobid.

Yet a young Lehigh team was game to put their best foot forward and to have a heroic sendoff for potential NFL prospect senior WR Troy Pelletier, and in that, the game was a rousing success.

With junior QB Brad Mayes expertly picking apart one of the top defenses in FCS, time after time he'd find Troy for reception after reception, each one highlighting his impressive skill set as an audition for the next level.

It wouldn't be enough to win the game, but it was enough to keep the Mountain Hawks within striking distance until the Seawolves would pull away in the 4th quarter.

It was also enough to establish Troy as the all-time greatest receiver in Patriot League history.

Indeed it was - a perfectly delivered ball and a perfectly caught timing route, a touchdown that would help trim the Mountain Hawks' deficit to 10, trailing 24-14.


I had a nickname for Troy as a Mountain Hawk player - as a freshman I coined him, somewhat impulsively, "The Doctor" - not for his major, but for what I saw as his surgical-like precision when it came to running routes and nabbing receptions like the one he showcased on Saturday.

Here's another angle on the same catch.

Before the game, the announcing team at ESPN3 of Mike Watts and Dustin Fox talked about Troy and said that there was an NFL scout that told them that there was a possibility that his name might be called at some point in the NFL Draft.

And in a scoreless first quarter, Pelletier featured prominently, especially during a 14 play, 92 yard drive where the Deerfield, New Hampshire native caught 3 passes for 42 yards.  (You wonder, had junior PK Ed Mish's 23 yard field goal not been pushed a little bit left, maybe the game might have taken a different feel.)

Stony Brook and Lehigh would trade touchdowns in the second quarter, but then, as had happened too frequently all season, the Mountain Hawks would drop several gift cards that the Seawolves would eagerly redeem.

Lehigh's defense would hold Stony Brook at the goal line, only yielding a field goal to make it 10-7 Seawolves.  But then the offense went nowhere on a three-and-out, the defense would yield their first big play of the game, a 35 yard completion by QB Joe Carbone to a wide-open WR Andrew Trent, setting up a 5 yard touchdown run by RB Stacey Bedell.

Then in the ultimate "you can't do that against a playoff team!" moment, Lehigh would fumble the ball away on the opening kickoff to give Stony Brook a short field, the $500 Apple store gift card of a gift for the Seawolves, which they would promptly convert into another touchdown.  After battling Stony Brook to a standstill for most of the first half, it was instead Stony Brook, 24, Lehigh 7.

The offense would battle back to close out the first half with Pelletier's highlight-reel touchdown and another brilliant offensive series by Mayes and junior RB Dominick Bragalone, who both executed a perfect delayed screen pass for a 31 yard gain that set up Troy's touchdown.  Lehigh's veteran offensive line, too, anchored by senior OL Zach Duffy, senior OL Brandon Short and senior OL Tim O'Hara, executed their roles to perfection.

Stony Brook would explode out of the locker room at halftime, scoring two touchdowns on five plays at a time when Lehigh desperately needed stops both times.

Carbone would find TE Cal Daniels wide-open over the middle on their first series of the second half for a quick-strike touchdown, and then, after a 3-and-out, a big punt return by WR Donavin Washington set the Seawolves up with another short field, and they would make Lehigh pay again.

"I thought we took care of things pretty good in the first half," head coach Andy Coen said after the game.  "and they jumped on us pretty quick in the second half.  When we came out, we weren't where we needed to be."

Stony Brook stuck to their gameplan, and it paid off, the second time with a 12 yard rushing touchdown off the edge by RB Donald Liotine.

“Just trusting what our game plan was and keep running the ball,” Carbone said afterwards. “And we knew eventually one was going to pop and they all started to pop and all started to click once the third quarter hit.”

Down 38-14, though, the offense wasn't done making things interesting.

Mayes would make mincemeat of the Stony Brook secondary despite being under heavy pressure all afternoon and absorbing two "official" sacks but enduing a lot more hits than just those two.  The Seawolves could not contain Pelletier's surgical precision (10 catches, 94 yards, 1 TD) or Casey's seemingly impossible ability to continually come up with big plays (11 catches, 107 yards 1 TD).  Portorreal added 9 catches for 84 yards, and Bragalone would end with 115 yards from scrimmage and 1 TD as well.

Mayes had a stellar 3 TD, 0 INT performance against Stony Brook, passing for 333 yards against the Seawolves, only the third player to do so this season.  Only Richmond QB Kyle Lauletta, a Walter Payton Award-finalist, and New Hampshire QB Trevor Knight, who was on the third team all-CAA team, were able to do so this year.

"We battled," Andy said.  "Brad and the receivers kept us in the game.  The offensive line did a really good job.  We ran the ball to keep them off guard a little bit.  We did a lot of good things, just not enough to beat a big, powerful team like Stony Brook."

Down 45-21, surprisingly - Mayes came out, and senior QB Matt Timochenko, Mayes' backup and the holder all this season, came in on 2nd and goal at the 1.  He powered through the block from his center, Brandon Short, and scored his first - and only - touchdown of his career, sending a cheer through the Lehigh fans that made the trip.

Stony Brook would make the rest of the game academic with two late touchdowns, as if to emphasize what it will take on defense to make Lehigh into a team that can compete with Stony Brook in the playoffs in the future.

“We wanted to use our athletic guys on the edge and just run physical like Stony Brook always does,” Liotine said afterwards. “We knew if we just got the ball downhill, one-and-one in space, we’d be able to create those opportunities.”

But that win in no way dulls the satisfaction of the challenge of this season for the Mountain Hawks, who started the season in a near-disaster but pulled out of the nosedive long enough to defend their Patriot League championship and put themselves in another FCS Playoff game that few in September might have predicted.

But with at a bare minimum Mayes, Bragalone and Portorreal coming back next year, and valuable playoff experience gained by those players, there remains plenty of excitement for next season, and what this skill group will end up doing next season.

(Thanks to former Brown and White editor Doug Henning for his excellent footage from the game.)