Position Switches Something To Watch In Lehigh's Spring Session 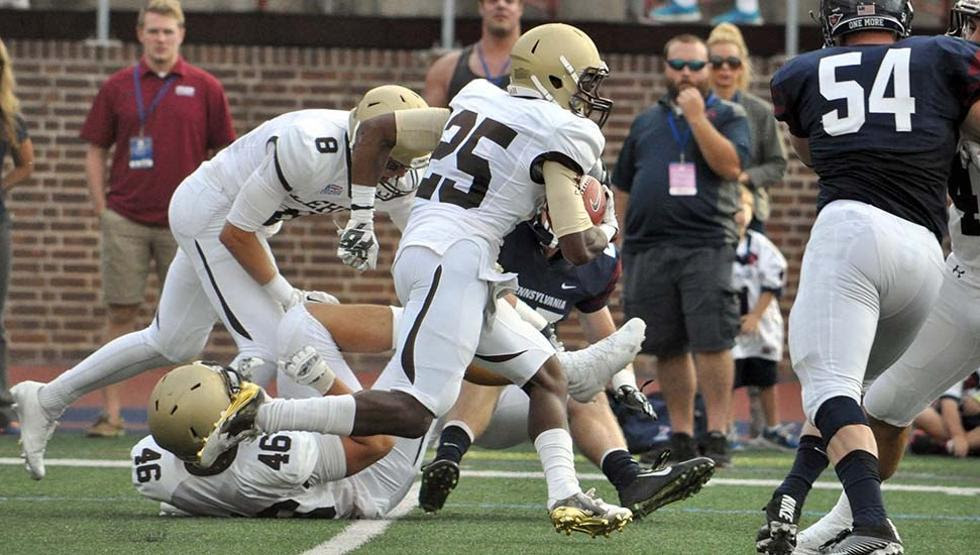 Probably the biggest news from the first few days of spring practice is a few changes on the depth chart that may not seem that important at first, but could pay off later this fall.

It's the switch of rising senior Marc Raye-Redmond to the offensive side of the ball, and rising junior Nick Thevaganayam to the defense.

Raye-Redmond last season played mostly on special teams, and was listed as a defensive back.  In his role on special teams, Marc excelled, not only notching 12 tackles but also getting 184 return yards alongside rising senior WR Gatlin Casey on kickoffs.  Against Princeton last year, he had two returns for 49 yards.


"Every time I move kids around," head coach Andy Coen said, "it's because I think it helps the team and that individual player.  Thevaganayam was a backup tailback, and even when we recruited him a long time ago, I thought he would be a good fit at safety.  I talked to Craig Sutyak, and he felt the same way, so we made that move."

LFN's take: "Nicky T", as my typing fingers like to call him, wasn't going to get much opportunity behind Bragalone, but it's intriguing to think about him on the depth chart at either safety or rover.  In Lehigh's 3-3-5 defense, having a stable of safeties and rovers is a must, and I think Nicky T will make his presence felt.  It will be interesting to see that depth chart competition take shape.

"Marc Raye-Redmond, had really been doing a lot of special teams stuff," Coen continued, "but not getting a lot of opportunities in the secondary.  So we gave him the opportunity to play tailback, which is where he played in high school.  What I've seen from him so far in the spring has bee very impressive.  Now he's got to figure things out."

LFN's Take: I like this move of Raye-Redmond from corner, where he was deep on the depth chart, to a possible change-of-pace tailback, where he could fit in better in terms of role as a possible pass-catcher out of the backfield.  It will be exciting to see Raye-Redmond, already a very good special teams maven, "figure things out" over the course of this spring.

Lehigh has made it thorough the first three practices of their spring session thus far.  This week, subject to change, they are scheduled: