How do you write about sports when it doesn't feel like a game anymore?

This is the crux of the question I've been struggling with over the last few weeks.

Like many of you, I was shocked at the election of Donald Trump to become our next President.  Also like many of you, I paid as he did things differently when it came to talking about the political foes he defeated, how he went about assembling a cabinet, and how he engaged the press.

Everything about this point in time in history feels historic.  No set of Americans have ever elected someone like Donald Trump as President.  Nobody, not Trump of the mobs of Twitter people that seem to follow him, have used Twitter to attack people so directly almost like a weapon, especially focused at journalists that are trying to get at the truth.

Frankly, nobody knows what's coming next.

So how do you write about sports at a time like this?  How do you compartmentalize what you're feeling about the election, and crack open the vault which waxes philosophic about Lehigh's latest and greatest postseason award for football, or latest achievement in basketball or wrestling?

The answer appears to be to look to history - and to look to sports - to find narratives.  And I found one.

So easily sports taglines, quotations, and narratives are superimposed on our lives to help us get through difficult times.  When life poses challenges, it really helps to be able to use sports to inspire and even sometimes guide people to get through them to excel.

And the American Electoral system has had plenty of mudslinging through the history of our Republic, but it certainly seemed like the 2016 election was the muddiest of them all.  Issues differences between the candidates seemed lost between personal attacks on candidates and supporters.

If there was one NFL game that could be considered a near-perfect, superimposable narrative over the entire 2016 election season, it would be the Thanksgiving Day Mud Bowl of 1968 between the Eagles and Lions.

The Mud Bowl was a football game that took place in November of 1968 that consisted of two franchises that haven't won a Super Bowl then or since, the Eagles and Lions. 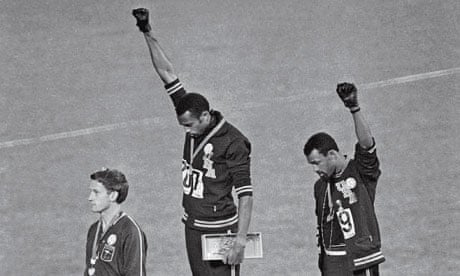 1968 was one of the most chaotic years in recent history, a year that featured the election of Richard Nixon, the assassination of Dr. Martin Luther King, and the Vietnam War's Tet Offensive.  Among a plethora of other chaotic events, the black power salute of Tommie Smith and John Carlos during the Olympics inflamed racial tensions.

In Detroit, in a football game that paled in significance to the events going on in the world, both teams were "weak candidates" that were no threat to be on anyone's Top Ten list of all-time teams: the 0-11 Eagles and 3-6-2 Lions.

Like the 2016 election environment, the field at Tiger Stadium was a disaster.


Wayne Walker, a Lions linebacker in 1968, recalled the mud at Tiger Stadium being "ankle deep" even before the game started. Roger Keim of the Philadelphia Inquirer wrote, "Tiger Stadium's turf made the average pig's quarters appear to be wall-to-wall carpeted by comparison."

And off the field, things were scarcely better for both teams.

The Lions were mired in a seven game losing streak, while dominating the news for the Eagles was Jerry Wolman, a Washington, DC real estate developer and owner of the NFL franchise.  His $100 million financial empire, largely based on real estate, was crumbling into bankruptcy, forcing him to sell the Eagles.

About the only bright spot for the Eagles was the possibility of getting the first pick in the NFL Draft, with which the Eagles could select one of the most exciting college football players of his generation, RB Orenthal James Simpson.

(O.J. was not excited about the prospect of playing for the Eagles.  "I'd prefer to play in California for an NFL team," he told reporters.)

All the Eagles had to do to "win" was lose.  If they kept losing, they would have a draft pick ahead of the 1-9-1 Buffalo Bills and would be able to draft Simpson.  The value of Wolman's team, too, would have been greater with the promise of such a potential superstar included.

(Wolman really could have used a Sam Hinkie around to tell him to "trust the process".)

It was in this mud-slinging environment that the two teams took the field - an otherwise meaningless game, at old Tiger stadium, the field untreated and unmanaged after two straight days of torrential rain.

On the field, none of the candidates could do anything.  During the course of the game, a steady rain fell, and footing was impossible.  The decidedly mediocre quarterbacks, Eagles QB Norm Snead and  QB Bill Munson, combined for a grand total of 14 passes completed, 124 total yards between them and 3 interceptions.  Add two fumbles and an average of a little over 3 yards per carry, and you have muddy, unwatchable football. 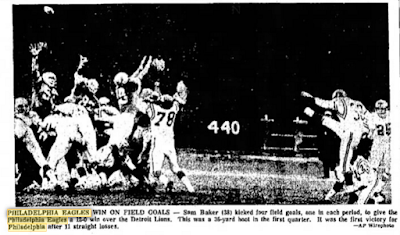 The only scoring in the game came from four field goals by Eagles PK Sam Baker, one in each quarter.

And how, exactly, was he able to get off the winning field goals?

Why is it, he asked Lions equipment manager Roy "Friday" Macklem, that every time the Eagles kick they throw in a dry ball from the bench?

Macklem was stunned. "Why didn't you tell me earlier? They're not supposed to do that."
NFL rules in 1968 stated that only the home team could supply game balls. So while the Lions were toiling with muddy, rain-soaked footballs, the Eagles were using clean, dry ones.

Except on kickoffs, when Walker noticed Baker would load the ball up with mud to make life difficult for Detroit's return men.

It's certainly not definitive that Detroit would have won had the Eagles not cheated, but what isn't in doubt is that the cheating gave the Eagles an unfair advantage that ended up giving them a sufficient lead to win the game.


Ironically. in winning, the Eagles ended up being huge losers in the long run.

The Eagles would win one more game in the 1968 season, and thus ended up below both the Buffalo Bills and the Atlanta Falcons in the picking order in the NFL Draft.

The Bills would draft Simpson, who would go on and have a hall-of-fame career for the Bills and define the franchise in a positive way throughout the 1970s.  (It was in the 1980s when his world would crash down upon him and he would murder Nicole Brown Simpson and Ronald Goldman.)

Wolman ended up selling the Eagles to Leonard Tose, an opulent businessman that made his money in the trucking business.  Though he sold the team for $16.1 million, a record at the time, you have to believe that the price would have been much higher had the Eagles had the rights to O.J. Simpson.

Instead, the Eagles got the second running back on the board, Purdue RB Leroy Keys, who gave up being a running back after his rookie year and switched to defensive back.

To me, the most important lesson from all of this is that the Eagles did end up surviving the Mud Bowl.

Unsurprisingly, the Eagles in the early 1970s would continue to be a disaster on the field, until a little more than four years later, Tose would lure head coach Dick Vermeil to the City of Brotherly Love to build the Eagles into contenders.  And Vermeil did, after becoming essentially the Eagles' general manager as well as head football coach.

The Eagles would survive the blown draft pick, the real estate developer owner's bankruptcy, the bad decisions, in order to taste success under a modernizing NFL coach that brought the Eagles newfound success.

Sometimes, bad decisions can end up with good outcomes.  They may not come instantly, but they come eventually.