What Are You Doing the Night of Lehigh's 2017 Home Opener? 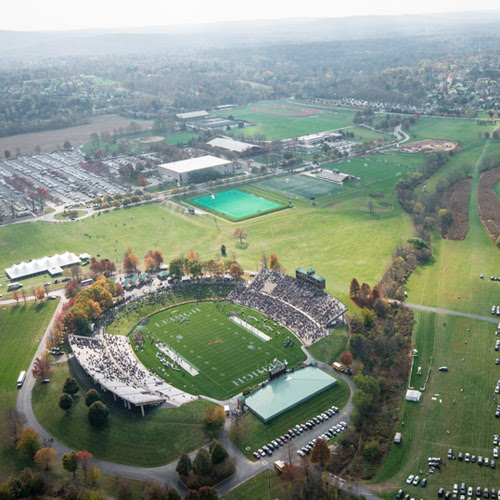 I have this vision.

It's the weekend of the home opener at Murray Goodman Stadium, Labor Day weekend.  It could be a Thursday, Friday, or Saturday.

In 2018, the Lehigh football team will open the season with a big celebration of the football program - at Navy, Lehigh's first game against an FBS team in over a decade.

In 2017, why not, as a one-off opportunity, try to have one Lehigh football game, the home opener, be the first-ever night game at Murray Goodman Stadium?

Will it cost money?  Yes.  Will it be easy?  Probably not.

However, is it doable?  I've got to believe the answer is "yes".


Lehigh's unofficial 2017 schedule is as follows:

The 2017 slate for your defending Patriot League Champions has six home games, including the mother of them all, the 153rd meeting of The Rivalry at Murray Goodman Stadium.

The Rivalry, of course, is always a big deal.  But what about the home opener?

Having no permanent lights at Murray Goodman Stadium, the options for when Lehigh's home opener can be played are limited.

In order to not conflict with class time, it has to be on a Saturday, and it has to be a day game with a 12:30 PM kickoff time.

The problem with this is that it's going to be Labor Day weekend.  Families will be traveling, or students might elect not to stay on campus.

There's also the matter of Penn State.  Fresh off of their Big 10 Championship and Rose Bowl appearance, Lehigh's home opener might be going up directly against the Nittany Lions' home opener vs. Akron, which is very likely to remain on Saturday and either have a noon start or a 3:30 PM start.

No matter how you slice it, the status quo is not ideal for celebrating Lehigh football on Labor Day.

But what if Lehigh could host a night game, with temporary lighting, for the Thursday night or Friday Night before Labor Day?

Suddenly, students are all on campus - without the burdens of the heavy workload to come during the semester - and able to watch a football game.  More families will be able to go, with no Penn State game to go up against and fewer family plans to mess them up.

It also would inject a little bit of excitement into the Murray Goodman game-day experience, something just a tiny bit different to shake things up.  Longer tailgates; a bit more pre-game hype before, say, a 6:00 PM kickoff; more food trucks to feed people dinners instead of lunches; there's a lot to possibly be done.

One-time events like this can get some more headlines and get Lehigh's football program to occupy the entire front page of the local sports section, rather than sharing it with Penn State.  These things matter.

Maybe the costs are prohibitive; I don't know.  Maybe logistically it's impossible; I'm not sure.

It would be nice to see what it would take to make this happen.

Anonymous said…
Fully agree. The football schedule needs to be shaken up a bit. It has been largely the same teams at the same venues year after year. If the Lehigh program is ever going to step up and truly challenge for the FCS championship (instead of getting into the playoffs via the Patriot League's automatic bid), it and the schedule need to be broadened beyond their current Patriot/Ivy focus.

Instead of the annual meaningless game against Monmouth, schedule a Navy, Vanderbilt, Rice or Northwestern. Such a game would bring great exposure (both athletically and academically), expand the recruiting base, enthuse alumni in the local market, pay handsomely (by Goodman Stadium standards) and, possibly, a great road win.

KG said…
Spot on. This year we have a meaningless game at Wagner added to the schedule - a non-event win or a catastrophic loss. The travel costs will be greater than any share of Wagner's pathetic 2500 person gate.

Per the prior comment, a game against an upper crust (academically) FBS team should be explored. Something to help sell recruits.

Anonymous said…
You guys are on to something. Colgate just had a nice cross-country road trip win over #23 Cal-Poly on national television (ESPNU). Meanwhile, we are playing down the road Villanova (again).