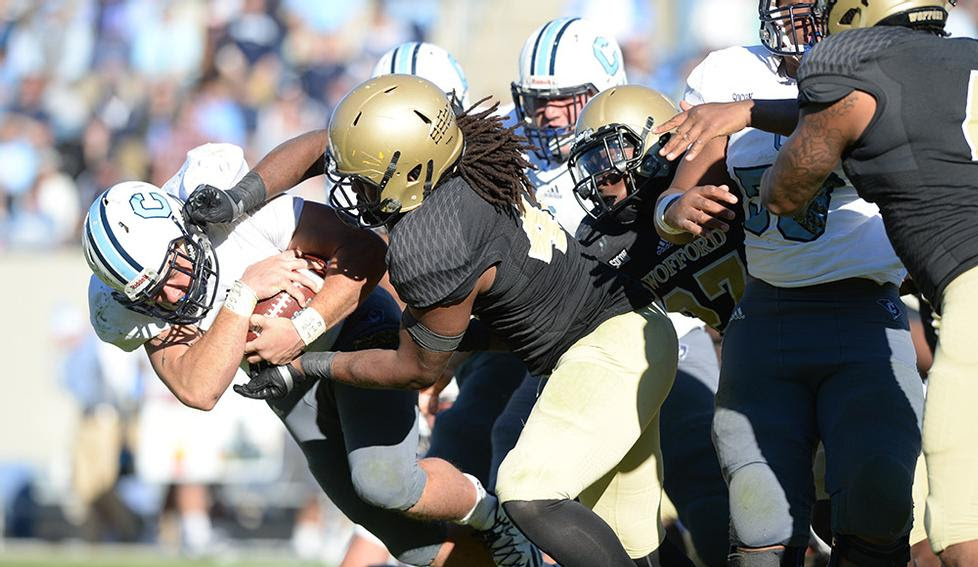 Still bummed that Lehigh's Patriot League Championship season is over?  Yeah, me too.

That doesn't mean that I've totally tuned out the college football landscape, though.

Starting tonight, there's some terrific games on TV and online streaming that I'll be watching, both at the FCS and the FBS level.  Happily, the FCS Round of 16 games are not all going up against each other like last week, so the opportunity is there to catch one or more of those games - and you can bet that I will be.

Below the flip, starting with the MAC championship game tonight, are my picks for games to watch, and - why not? - some picks as to who I think will win.

TV: ESPN2, or WatchESPN link on your computer, tablet or phone

The number of MAC Championship games I've been interested in watching up until this point have been exactly zero, but this one, which features one of the best young college football coaches in the game today, P. J. Fleck or Western Michigan, is different.

If the undefeated Broncos defeat Ohio, they will be 13-0 and have a real chance at a New Year's Six bowl (and should have a chance to play in the FBS plus-one playoff too, but they don't, and that's a travesty.)

If you're 8-4 Ohio, though, wouldn't it be the ultimate underdog storyline - the team that upset P. J. Fleck's expected coronation?  On paper, this is a mismatch, but could the Bobcats pull off the biggest upset in program history? 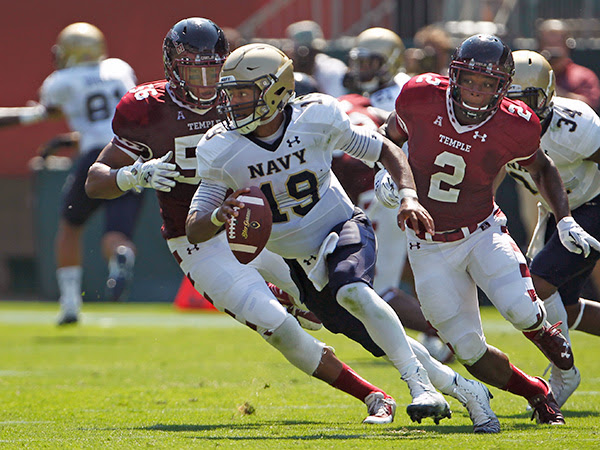 TV: ABC, or WatchESPN link on your computer, tablet or phone

Who doesn't love a little bowl chaos?  If you intrinsically like Patriot League-based Navy over Temple, and you love bowl chaos, you should be rooting extra hard for Navy to win the AAC championship.

Why?  Because if Navy beats Temple, the New Years Bowl lineup won't be able to be determined until Navy plays against Army in their glorious Rivalry.  Which means that the whole bowl system will be waiting around for another week before they can finalize any of the major bowls.

Even better, if Navy wins both games, and Western Michigan wins, it might come down to - yes! - subjective, Committee-based non computer-based rankings to determine whether it's Navy, or Western Michigan, that gets the New Year's Bowl slot.

In other words, chaos that completely blows apart the subjectivity and unfairness of the way that the bowl slots are currently allocated.  What's not to love?

Temple isn't as big a darkhorse as Ohio to pull off the upset, but ironically the Owls did lose to Army to start out the 2016 season, and had some close scrapes against UCF that don't exactly inspire confidence.  But it should be a very fun game against two very hot teams, and should be a good one.

Stream: WatchESPN link on your computer, tablet or phone 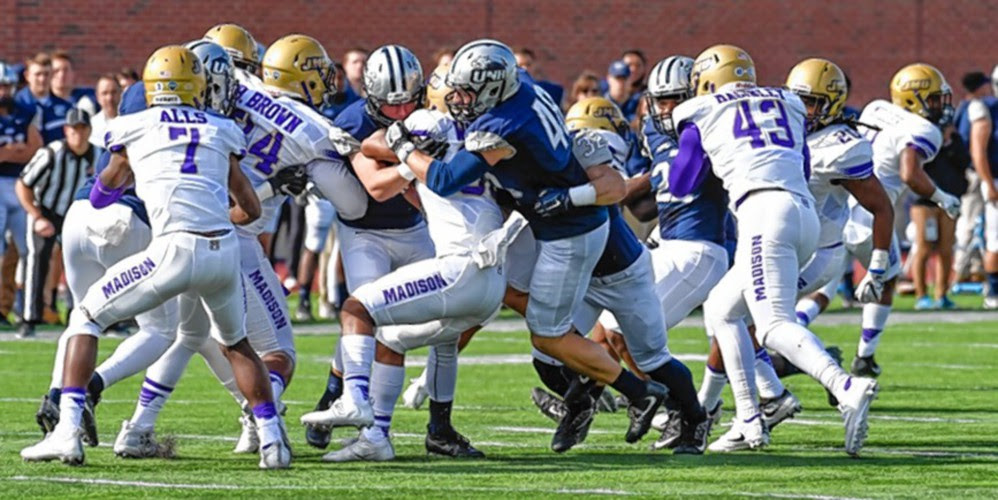 For Lehigh fans, it's necessary, and cathartic, to watch the game this weekend, to see whether Lehigh would have actually had a chance to beat James Madison, or not.

But it also is a compelling CAA rematch between two teams that were evenly matched earlier in the season when JMU escaped Durham with a 42-39 victory.

Against Lehigh, UNH looked nothing like the team that almost snuck into the playoffs with a late field goal vs. Maine, or the team that got floored by Albany at home.  So the question is, can QB Adam Riese and the Wildcat offense do it in consecutive weeks?

Furthermore, JMU enters this weekend's game with a QB issue of their own.   QB Bryan Schor, who has been out since mid-November with a collarbone injury is "expected to be available" this weekend, one of the nice perks, aside from home-field advantage, offered with getting a seed in the FCS playoffs.

On paper, it seems like a thrilling matchup.  And I fully expect James Madison, getting that crucial game of rest and a home game, to come out on top.

Stream: WatchESPN link on your computer, tablet or phone

After the conclusion of the New Hampshire/James Madison game, there are three fun and interesting matchups to consider that highlight three very different styles of football.

There's what promises to be a great offensive display in the snow in Cheney, Washington, as the high-octane Eastern Washington attack faces off against Central Arkansas on the blood-red turf of the Inferno.  Eagles QB Gage Gubrud and WR Cooper Kupp will feature, but Central Arkansas' defense and special teams, which helped orchestrate a 24 point comeback last week vs. Illinois State, will als feature.

In Charleston, South Carolina, two option teams will be featuring defensive, Dinosaur Bone football as Wofford takes on The Citadel.  The last time they played, overtime had to settle the score, with the Bulldogs narrowly eking out a 24-21 win.  Tellingly, Wofford outgained The Citadel the last time they played, but they turned over the ball four times.  If they hold onto the ball this time, they have a better than even chance.

And in the Alerus Center in North Dakota, that other North Dakota team, the Fightin' Hawks, will take on a Richmond team that pulled it together enough to beat North Carolina A&T last weekend.  It's North Dakota's first-ever FCS playoff appearance, and Richmond's second trip to North Dakota in the playoffs in the last two years, having earned a trip to play the Bison last year.  Will a banged-up Richmond team keep things together and beat the Hawks?  Or will the new kids on the block play with reckless abandon and win their first-ever playoff game?

Lots of storylines, and lots of fun.  I plan to switch to whatever game is the most competitive, and al three of these could be great games.

Saturday, 8:00 PM, Wisconsin vs. Penn State (at Indianapolis, IN)

It's the Big 10 Championship pretty much nobody expected.  No Michigan, and no Ohio State.  But here we are; it's Penn State and Wisconsin for the conference prize, and a better than 50/50 shot at the winner making the FBS plus-one playoff.

By now you're probably aware of the amazing run of RB Saquon Barkley, who was a high school teammate of QB Nick Shafnisky's, and the Nittany Lions.  Penn State has certainly gone on an amazing Big Ten run, but so has Wisconsin, winners of their last six games (and sufferers of close defeats to Michigan and Ohio State, oddly enough).

How much of Penn State's run has been a feather-light schedule after their shocking Ohio State win, and how much has been Barkley, offensive coordinator Joe Moorhead and the rest of the Lions staff?  How much of Wisconsin's run has been a feather-light second half schedule except for a win over Nebraska, and how much is Wisconsin's defense, which has gotten better as the season has gone along?

I think Penn State might run into a brick wall this weekend.  It's been a great run for the Lions, but I think the improbable dream of a playoff spot ends tonight.