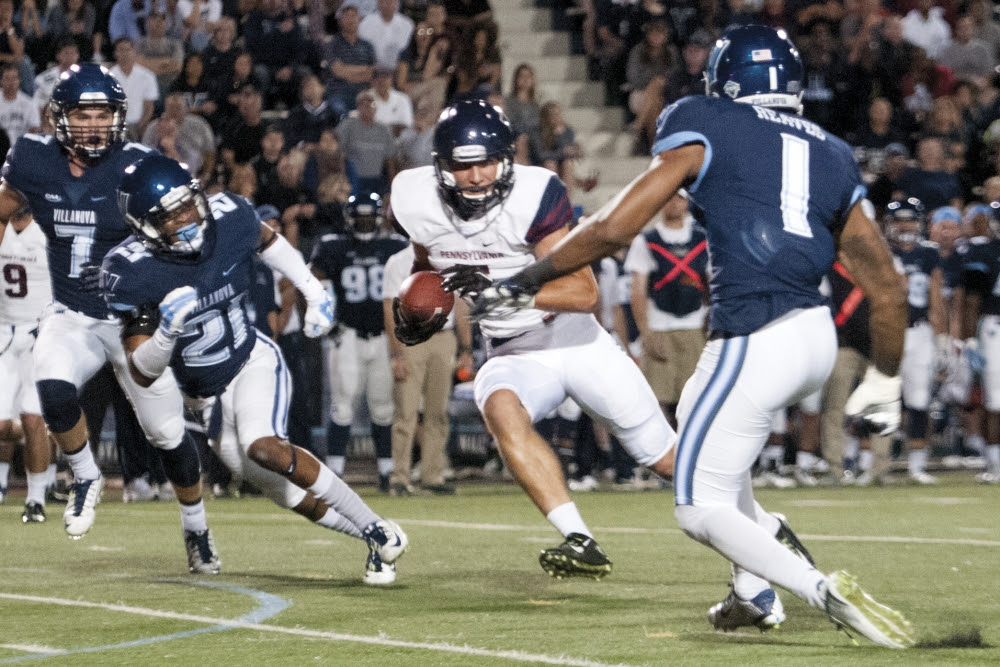 This might be a good time, for your reading pleasure, to remind you that these are modified with some more awesome Lehigh information from the originals over at The College Sports Journal.

It's also a good time to remind you that I already have written a bunch of these:

To come: Colgate, Villanova, and, of course Monmouth, the season opener on September 3rd.  And also, this preview of Penn.  Below the flip.
Penn Quakers

Biggest Strength in 2016:  Could there have been an unlikelier Ivy League championship candidate than Penn’s first season under head coach Ray Priore? After losing back-to-back games vs. Dartmouth and Fordham and giving up more than 40 points in each game, the 1-3 Quakers then proceeded to win the rest of the games on their schedule, piling up points on teams like Yale, Harvard and Princeton while coming up with just enough stops to win. An Ivy League co-championship, based on Priore’s system coming together much, much farther ahead of schedule, was the reason.

Biggest Challenge In 2016: Could it – gasp! – have all been a fluke? Penn came out of nowhere to come back to win a share of the Ivy League title, but it will be different competing for the championship in 2016 with actual preseason burdens of winning the championship. They’ll also have to do so with a defense that gave up 21 points or more in eight of their ten games last season. 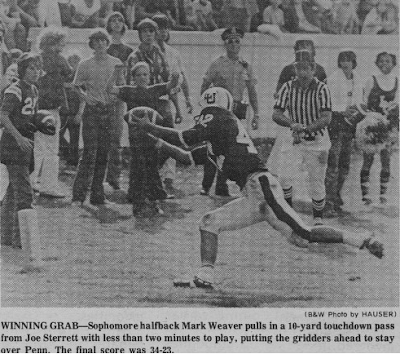 History With Lehigh:  Lehigh and Lafayette, of course, have "The Rivalry", but that sometimes obscures some of the other great rivalries Lehigh has as well.  At one time, Lehigh, Lafayette and Penn saw each others as athletic equals in terms of rivalry, competing for the "Championship of Pennsylvania" during a period in the 1890s.

Penn's rivalry with Lehigh, though long, has been the tale of two eras.  In the "early era", Lehigh only managed to beat Penn a grand total of twice, and both times it was in large thanks to a now-outlawed mass momentum play, the "Lehigh V", that helped the Brown and White win.

Once mass momentum plays like the "Lehigh V" were outlawed, Penn went on a winning streak against Lehigh that made it abundantly clear that the Brown and White were nowhere near the Quakers in athletic ability.  From 1890 to 1975, Penn won a total of 34 straight contests against Lehigh, finally broken with a 34-23 win by the Engineers over the Quakers, thanks to a young quarterback phenom named Joe Sterrett.

"For the first time since 1889," the article read, "the Engineer gridders defeated the University of Pennsylvania.  The 34-23 victory, set up by a 21 point outburst in the fourth quarter, ended a 34 game losing streak to the Quakers."

After that 1975 win, Lehigh would make up for lost time against Penn, winning 10 of the next 14 meetings.

Last Meeting: It could have been the best all-around performance of Lehigh's 2015 season.

It followed a humbling defeat at James Madison, and "We got on the guys," Andy Coen noted before the game, "and said to them: You've got to win.  You've got to make up your mind that you want to win.  You have to want to start winning games."

"Getting on the guys" led to one of Lehigh's crispest performances on the year.

Jumping to a 21-7 lead and never letting Penn get back into the game, the Mountain Hawks ended up doubling up the Quakers 42-21.

"This week was a great win for us, especially home opener, coming out and showing our fans this team is a lot different than last year," senior QB Nick Shafnisky said after the game, who connected with junior WR Troy Pelletier with 2 TDs on that afternoon. "I'm excited as heck to keep it rolling."

Biggest Departures: Two all-league players, one on offense and one one defense, leave some big gaps to fill. TE Ryan O’Malley, an all-around all-Ivy blocker and receiver, is in camp for the NFL’s Oakland Raiders this summer. LB Tyler Drake, who led the Quaker defense in tackles (80), tackles for loss (12 1/2) and sacks (8 1/2), also leaves Penn with a gaping hole at linebacker.

Players To Watch:  Even with those two pieces gone, Penn boasts a dynamic pass-catch combination that promises to be even better in 2016 than they were in 2015.

Penn didn’t really get going until WR Justin Watson (1,082 yards, 9 TDs) blossomed as a deadly target of QB Alek Torgerson (1,996 yards passing, 19 TDs). Watson, a 6’3, 210 lb Bridgeville, PA native that always seems to find a way to get open, was a revelation last season and will be one of the most closely watched receivers in all of FCS.

The question is, can he keep up the same level of production when he is the main guy that opposing defenses will scheme against? And if Watson is constantly double-teamed, can Torgerson make them pay?

Biggest Game: at Dartmouth, 10/1/2016. In 2015, it wasn’t even close. Sure the scoreline read Dartmouth 41, Penn 20, but that doesn’t adequately describe the beatdown the Big Green enacted on the Quakers at Franklin field, pulverizing them 41-3 before pulling the starters and letting Penn score on their backups. Every Penn player must remember the feeling of that humiliating beatdown – and will be trying to make sure that it doesn’t happen again up in Hanover.

Rose-Colored Glasses Say: “Look around. Harvard, Yale and Dartmouth all are breaking in new QBs. Cornell and Columbia aren’t in our same league. Brown can’t stop anybody, and Princeton.. is Princeton. Contrast that to us, who have the best returning QB in the Ivy League, the deadliest receiving threat, our top two running backs. I think this is the year we remove the co- from Ivy League champions.”

Glass Half Empty Says: “We have a lot returning, but how are we going to replace Tyler Drake? He was, by far, our most dominating defensive player on a defense that, to put it mildly, made a lot of games more interesting than they should have been. Before I’m able to stamp the ‘dynasty’ label on this group of seniors, I want to see improvement on this defense.”

Penn In Two Sentences: It’s hard to go against a team and a coach with the best QB to WR combination in the Ivy League, especially when so many other teams need to recuperate at the most important position on offense. There’s a chance the Quaker defense might let Penn down on their quest to repeat, but judging by what Ray Priore did last year, I ain’t going against them.