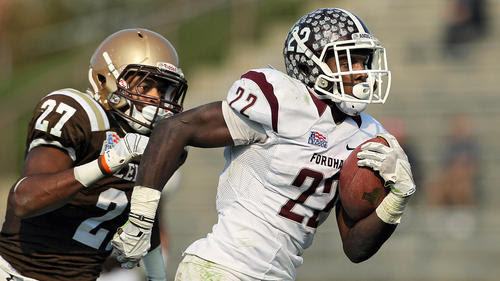 We continue the series "Know Your 2016 Opponents" a mere 16 days away from the opening of the 2016 football season.

This might be a good time, for your reading pleasure, to remind you that these are modified with some more awesome Lehigh information from the originals over at The College Sports Journal.

It's also a good time to remind you that I already have written a bunch of these:

To come: Penn, Colgate, Villanova, and, of course Monmouth, the season opener on September 3rd.  And also, this preview of Fordham.  Below the flip.

Biggest Strength in 2016: When the “Battering Ram” offense of Joe Moorhead was firing on all cylinders last season, Fordham’s multiple no-huddle offense was awfully difficult to stop. Eight times last season, Fordham scored more than 35 points in a game; eight times, they came out on top, including some impressive wins versus Army, Holy Cross, and Lehigh.

Biggest Challenge In 2016: The Rams don’t only need to build up their defense, who gave up 50 points to Chattanooga in the playoffs and 31 points against Colgate, they also need to replace the architect of their team, Moorhead, who is now the offensive coordinator at Penn State. The way Fordham handled the transition from Moorhead to his assistant, Andrew Breiner, was impeccable, however the question remains: how will Breiner do in his first season as a head coach?

History With Lehigh:  With all the talk of the classic teams of Fordham - you know, Vince Lombardi, the "Seven Blocks of Granite" and all that - almost all of Lehigh's history against the Rams comes in the Patriot League era.

Lehigh did play one game against Fordham in 1923, a 9-6 win for the Brown and White during a 6-2-1 year that say Lehigh's only losses come to hated rivals Rutgers and Lafayette.  "With the exception of the first five minutes of play, Lehigh played indifferent football," The Brown and White reported.  "At times the Brown and White showed flashes of form and a smooth running machine, but for the most part they lacked the dash and drive which characterizes the opening minutes of the game."

Head coach Andy Coen has to be glad that Moorhead is now plying his trade at Penn State.  In Moorhead's four years running Fordham, he went 1-3 against him, giving up an average of 47.5 points per game.

Last Meeting: "Edmonds came out of the locker room like a man on fire, and played like it," I said of the preseason Patriot League Offensive Player of the year in 2015 RB Chase Edmonds.

With his team down 21-17 at half, but with 100 yards rushing, Edmonds exploded in the second half vs, Lehigh's defense, more than doubling his rushing total by the end of the 3rd quarter.  He would play a part in 4 touchdowns, a league-record 347 yards rushing, and end with 404 all-purpose yards on the afternoon.

It was a game of extreme frustrations for the Mountain Hawks, with an injury sidelining senior QB Nick Shafnisky at halftime.  Sophomore QB Brad Mayes saw his first-ever significant game action, and shook off some early jitters to look good in the second half, able to keep the game close up until about two minutes left in the game.  But when a FG would bounce off the upright by sophomore PK Ed Mish in Lehigh's bid to make it a one possession game, it was a summary of the day.

Biggest Departures: The Rams’ leading tackler last season, LB Stephen Hodge was the heart and soul of the defense last season (119 tackles, 11 1/2 tackles for loss, 3 INT). A former walk-on and 2013 Patriot League Defensive Player of the year, Hodge didn’t even know if he’d play football again after shattering his kneecap and partially tearing his patella tendon going into the 2014 season, but after being granted a medical redshirt, he somewhat surprisingly finished 2015 with the same type of production that Patriot Leaguers saw during his whole career. That type of grit and production will definitely be missed.

Another important guy who graduated was OL Garrick Mayweather, Jr., a mainstay on the Rams offensive line that will be spending his summer in the training camp of the NFL’s Kansas City Chiefs.

Players To Watch: RB Chase Edmonds is already a really special player for the Rams, and he’s only a junior this season and eager to continue to rewrite the Ram record books. A former STATS Freshman of the Year and Patriot League Rookie of the year, he built on his amazing freshman season by scoring 25 all-purpose touchdowns while racking up 1,643 yards in 12 games. Against Lehigh last season, he wrecked the Mountain Hawks defense to the tune of 402 all-purpose yards, setting a Patriot League record in the process.

It’s hard to imagine Edmonds outdoing what he’s already accomplished, but he has a golden opportunity to do so, with the rest of the offensive skill position players returning this year, including QB Kevin Anderson, himself no slouch either (3,182 yards passing, 341 yards rushing, 33 TDs).

Worthy of mention: every game in 2015 where Edmonds ran over 100 yards, Fordham won. Games where Fordham lost, versus Villanova, Colgate, and Chattanooga, Edmonds ran for a combined 130 yards.

Biggest Game: vs, Colgate, 11/5/2016. It came down to a missed two-point conversion last season. After an incredible last-gasp comeback with two touchdowns in the last 27 seconds, Anderson couldn’t seal the comeback, his two-point conversion pass knocked down at the line.

There is a tiny concern that the Rams might be looking ahead to a game the following week at Yankee Stadium vs. Holy Cross, but the way that Fordham lost that game in Hamilton last season, it seems likely that Breiner’s team will be geared for revenge at home at Rose Hill that weekend.

Rose-Colored Glasses Say: “Let’s just say it: we have the best athlete in all of the FCS in Chase Edmonds. He’s a once-in-a-generation back that makes everything happen for us, and, scarily for the rest of the league, he’s only getting better every season. Better yet, he’s not the only piece of the puzzle on offense – we have plenty to punish teams that key on Chase too much. Stay healthy, and we are poised for a title and a deep FCS playoff run.”

Glass Half Empty Says: “First, all of these great things happened with Joe Moorhead as our head coach – by all indications, Breiner looks like a great successor to Moorhead, but will he be? Second, people are glossing over the graduation of Hodge and Mayweather, and that’s a mistake. Our defense had problems stopping teams last year, and we’re losing the guy who was our best defender by a wide margin. Can we rebound from that? Also, Chase ran behind a great offensive line. Is it really going to be that easy to rebound from losing him, too?”

Fordham In Two Sentences: Easy to say, hard to do: Simply stop Chase Edmonds, and you stop Fordham. Edmonds should carry the Rams to a lot of Patriot League victories with their powerful offense and the Patriot League’s rebuilding defenses, but can he carry them past Colgate?