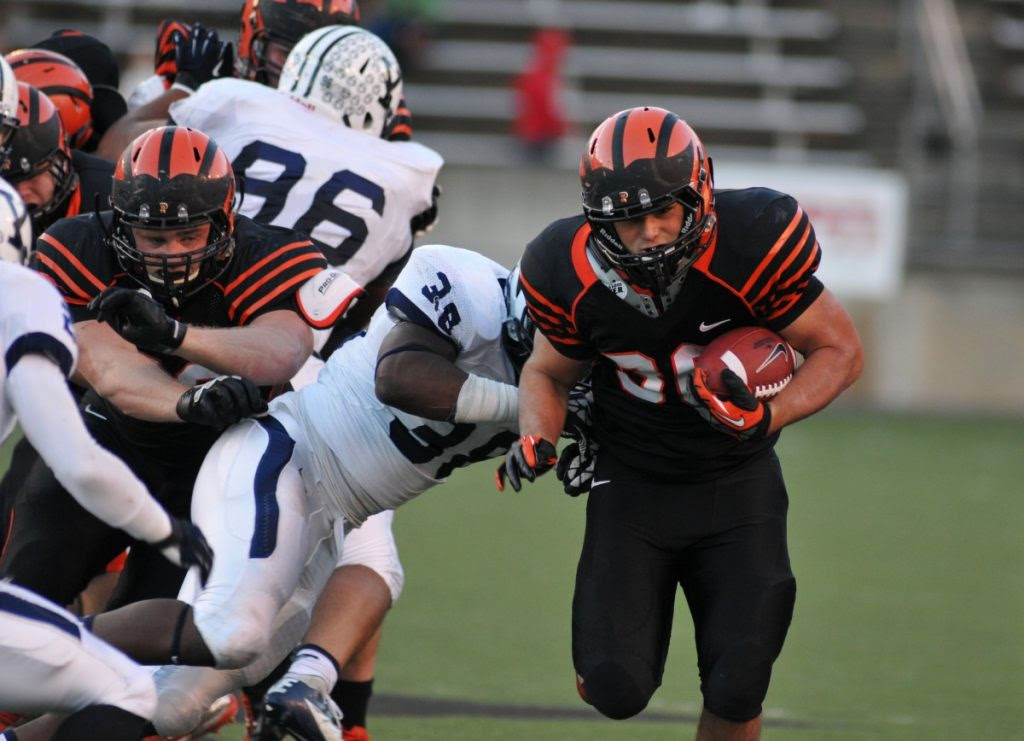 Today's "Know Your 2016 Opponents" series continues with the team that is predicted by College Sports Journal to finish 4th in the Ivy League: Princeton.

Lehigh's visit to Powers Field at Princeton Stadium last fall wasn't a whole lot of fun for the Mountain Hawks.  In fact, it was one where head coach Andy Coen felt like Lehigh made too many mistakes to win.

But what really stood out to me was Andy's response to a question I had - whether he felt like the Mountain Hawks needed to play the perfect game to win on that thick, hot, humid evening.

"Absolutely not. I'll go back out and play them [again] right now," Coen said.

Biggest strength in 2016: The biggest strength of the Tigers last year was basically the way they competed in the first four games of the season, pummeling Lehigh, Lafayette, Columbia and Colgate by a combined score of 146-58.  Granted, they faced the Patriot League champion Raiders before they fully got things together, but they dominated that game, jumping out to a double-digit lead and never looking back.

Biggest Challenge In 2016: After their win over Colgate, Princeton closed their season by dropping five of their next six games, all Ivy League contests.  Though the Tigers were seriously hampered by injuries, three of the losses came in excruciating fashion - one to Penn on a blocked kick in overtime, and another on a heroic touchdown drive by Brown.  Even depleted, Princeton had a chance to come away with victories, so the key to Princeton's 2016 season has to be to learn how to finish what they start.

History with Lehigh: Along with Rutgers, Penn, Lafayette and a few others, Princeton was one of the schools Lehigh has faced often since the earliest days of the football program.  Dating from 1887, the Tigers, with some of the best teams in the country, pummeled Lehigh as their fledgling program was being built.

From 1887 to 1930, Lehigh didn't beat the Tigers at all, but the talent disparity was such that ties were considered as good as wins.  "Lehigh Ties Tigers On Jungle Gridion" was the headline in The Brown and White in 1911, their first non-loss to Princeton in program history.  The final score would be 6 to 6, and Lehigh's only score in the game came when lineman J. I. Vela would deflect a pass, "and the ball bounded in the air," the student account said.  "When it came down, it fell into Knox's hands, and in an instant the big Lehigh guard was off like a shot for the goal line."

The 55 yard interception return reportedly left the Princeton fans in stunned silence - Princeton wasn't only expected to beat Lehigh, like they had so many other times before, but also shut them out.  Eventually Princeton would rally to tie and avoid total humiliation, but as far as Lehigh was concerned, the tie against national championship contenders Princeton was one of the crowning achievements of the 1911 season.

Vela's interesting story continued after graduation, where he returned to his native Ecuador and became chief engineer of the Quito-Guayaquil railroad, and was also involved in the construction of many projects in northern Ecuador, including a sewage system in his hometown of Ambato.

There were some great individual plays, like a trick play broken up by CB Olivier Rigaud and returned for a touchdown, and another where senior CB Brandon Leaks upended RB DiAndre Atwater (pictured).

But the big plays couldn't outweigh some other big miscues, like a fumbled 4th down conversion by QB Nick Shafnisky that was returned for a touchdown, and a ball that sailed through the hands of WR Derek Knott and into the mitts of LB R.J. Paige for another score.

Biggest Departures: WR Seth DeValve, who was drafted in the fourth round by the Cleveland Browns this spring, was a key member of Princeton's passing attack when healthy.  As a possession receiver who finished 10th all time in total receptions, he was seriously missed when he was hurt, and he'll be missed now that he's graduated.

CB Anthony Gaffney was a honorable mention all-Ivy League defensive back last season who was not tested very often.  He leaves this season, too.

Players To Watch: After RB DiAndre Atwater would be lost for the season in 2015, RB Joe Rhatigan stepped in nicely last season and firmly took over the starting running back role.  Averaging more than 5.0 yards per carry, he could really take the pressure off of QB Chad Kanoff if he can emerge as a first team all-Ivy caliber running back.  He's shown flashes over the past few years - all he needs to do now is put everything together.

Biggest Game: vs. Brown, 10/15/2016. It's where everything started to go south for the Tigers last season - a heartbreaking 38-31 loss where, after Princeton tied the game at 31, Brown drove for the winning touchdown with under a minute to play.  This year Princeton will be hosting Brown at Powers Field, and it's unlikely, to say the least, that any Tiger taking the field in this game will have forgotten that disappointment.

Rose-Colored Glasses Say: "We have the returning quarterback.  We have a running back that has a chance to become a star.  We have Bob Surace's bag of tricks.  We also have a defense with a surprising amount of starters returning from last season.  Last season's injury-marred second half of the season was an aberration; with a healthy group, and this number of returning starters - we can contend for an Ivy League championship.  Remember, three more touchdowns last season, and we're 8-2 and hungry for 10-0 this season."

Glass Half Empty Says: "Sure, we had some injuries, but you don't just lose guys like Atwater, DeValve and Gaffney and expect a seamless transition.  And was last year's second-half swoon really an aberration, or a sign that the Tigers are falling back to the pack?  I keep going back to that Brown game, where the Tigers fell behind early and couldn't battle all the way back.  It's not the first time this has happened."

Princeton In Two Sentences: If Princeton can steer clear of injuries and learn how to win some close games, there's every reason to believe that the Tigers can compete for the Ivy League title.  With significant continuity returning, could this be the year they buck the trend?