July 15, 2016
Today's "Know Your 2016 Opponents" series continues with the team that is predicted by College Sports Journal to finish 5th in the Patriot League: Bucknell.

Bucknell was picked to finish 5th in the Patriot League, but does that mean Lehigh fans should look past the Bison?  Hardly.

By a wide margin, the Bison had the best defense in the Patriot League last season, and just two years ago, walloped Lehigh 45-24 and didn't even need two injured starters at QB and RB to do it.

Someone has to be picked 5th in the Patriot League, and according to the College Sports Journal, that team is Bucknell.  But they could certainly win it all.

Biggest strength in 2016: Though the Bison disappointed in 2015, you can't hang that on the backs of the defense, who was ranked 12th in the nation in scoring defense and 6th in red zone defense, holding high-flying offense like Colgate, Fordham and Lehigh well under their season scoring averages. Better yet, the unit is somewhat of a no-name defense filled with a bunch of talented players, most of them underclassmen.  LB Ben Richard and LB Mark Pyles, two rising juniors, were No. 2 and No. 1 in tackles respectively last season.

Biggest Challenge In 2016: As great as the defense was, the offense really struggled, managing under 20 points per game last season and only eclipsing more than 25 points once last season - an overtime win vs. VMI. They were almost the mirror image of their defense - they were 5th worse in red zone scoring on offense. 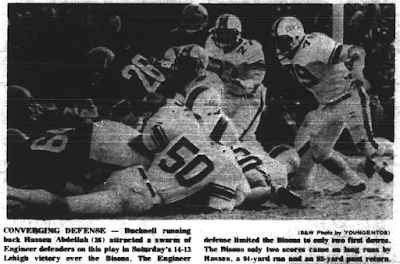 History with Lehigh: It tends to be a bit obscured by "the Rivalry", but Lehigh and Bucknell have also been fairly bitter foes on the gridiron as well.  This year will be the 80th meeting between the schools, with Lehigh holding a 45-31-3 edge.

One of the best-ever games in the Lehigh/Bucknell series came in 1979, where the Engineers eked out a 14-13 win over the Bison to save their season and, eventually, qualify as an at-large team to the I-AA playoffs.  Down 13-7 with 1:08 to play, QB Rich Andres tripped over his fullback on 3rd down at the Bucknell 1 yard line, setting up a do-or-die play on 4th down.  The next play, the fullback who tripped him, FB Matt Ford, got free in the corner of the end zone for the game-tying touchdown.

Of course, in 2016 the more important stat, in terms of Lehigh, is 2-1, which is the record of Joe Susan's Bison teams over the Mountain Hawks in the last three years.

Before Joe Susan took over, wins over Bucknell were almost a given; now, they are circled on the calendar.  If for no other reason, from a Lehigh perspective that's why Joe Susan is a great football coach.

Last Meeting: Decked for the first time in recent memory in white shirts, white pants, and white helmets with a brown "LEHIGH" on the side (not unlike the 1979 uniform combo), the Mountain Hawks came out determined to get their season on track in Lewisburg.

After a demoralizing loss to Yale the week before, the Mountain Hawk defense held the Bison in the second half to only 3 points, allowing Lehigh to leave Lewisburg with a 21-10 win.  Grinding out the victory was a second half drive that chewed up almost the entire fourth quarter with a 17 play, 54 yard drive, with sophomore RB Dom Bragalone and junior RB Nana Amankwah-Ayeh doing most of the pounding.

Biggest Departures: The Bison return nine starters on defense, but the two players that did graduate were some very good players: SS Clayton Ewell, who played in every single game in his 44 game Bucknell career and notched 11 tackles for loss last season, and DE Jimmy King, who had 11 1/2 tackles for loss and 7 sacks as well.

Player To Watch: OL Julie'n Davenport has been attracting lots of attention from NFL scouts, and if you watch the 6'7, 315 lb senior from Paulsboro, New Jersey, it's obvious. If they can find a bookend tackle on the other side of the line, it's quite possible to see QB R.J. Nitti, RB C.J. Williams and WR Will Carter return to their 2014 form.

Biggest Game: vs. Colgate, 10/15/2016. The Bison will start with an uneven early-season schedule, with an away game at the defending NEC champions Duquesne and a bunch of other teams not expected to compete for FCS playoff spots.

But in early October there will be two critical games that will dictate whether they will be contenders or pretenders.

The game on October 8th won't be easy at Holy Cross either, but no matter the outcome of the game against the Crusaders, the home tilt against the defending Patriot League champions, Colgate, will almost certainly be a must-win - and in the friendly confines of Christy Matthewson-Memorial Stadium.  They came very close to knocking them off last season.  Might being at home be the difference in 2016?

Rose-Colored Glasses Say: "Let's face it - we only lose six senior starters, and we had one of the best defenses in the nation last year. We have our starting QB and our top two skill players returning from last year. Furthermore, our schedule aligns perfectly - some nice tune-ups until the meat of the difficult Patriot League schedule. If we beat Holy Cross and Colgate in consecutive weeks, we can win the whole thing."

Glass Half Empty Says: "Let's face it - with all those offensive players, what good did it do us in 2015? There were injuries, and even when somewhat healthy we couldn't get out of our own way in the red zone, and it's essentially the same team going out there this season. Nitti did well two years ago, as did Williams and Carter, and those three almost brought us the title - but what can they deliver us this season?"

Bucknell In Two Sentences: Once a team with perennially low expectations, Joe Susan's Bison are now a program that has a team culture where competing for Patriot League championships are the goal and expectation. And if the golden trio of Nitti, Williams and Carter can capture a bit of the magic they had two years ago, they certainly have a decent shot.