The crimes committed by Gerald Sandusky continue to be a band-aid that is re-applied, and continuously ripped off, the arms of those of love Penn State.

Already convicted by a court of law, Sandusky has what is effectively a life sentence, while others who were in power at Penn State during the 1998 period where sex crimes were reported internally, Graham Spanier, Gary Schulz and Tim Curley, have still not faced any sort of trial and are still at-large today.

Last week, with an interesting sentence appearing deep in an insurance lawsuit involving a Sandusky victim settlement, the band-aid was once again ripped off.

The details of the lawsuit claim that Joe Paterno chose not to act in 1976 when one victim reported abuse by Sandusky, while Sarah Ganim, the hero reporter who broke the Sandusky story wide-open five years ago, added a second story of abuse in the 1970s where Paterno pressured one of Sandusky's victims over the phone in the 1971 to not press charges against him.

Penn State folks doggedly and consistently appear to deny that Paterno had anything to do with Sandusky, with the Paterno family themselves on the leading edge of of the denials.

As you'll discover below, these denials are becoming less and less plausible by the second.

Say one thing about current Penn State president Eric Barron - he's been consistently defensive of anything that involves Joe Paterno.

Barron went to that playbook very quickly after the latest Paterno accusations came to light.

"Over the past few days, allegations have surfaced from individuals who claim to be Sandusky victims and from unidentified individuals about the alleged knowledge of former University employees," Barron said. "None of these allegations about the supposed knowledge of University employees has been substantiated in a court of law or in any other process to test their veracity.

"I want you to know I am appalled by the rumor, innuendo and rush to judgment that have accompanied the media stories surrounding these allegations. All too often in our society, people are convicted in the court of public opinion, only to find a different outcome when all the facts are presented."

It is especially rich to claim that there is a "rush to judgement" on Paterno, given the existence the now-infamous Freeh report, which at best shows Paterno with a shocking disregard for following up on eyewitness sexual abuse claims.

Let's start at the top. 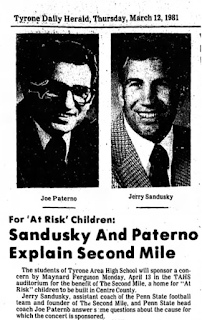 (A very few of the items on this timeline were used verbatim from this article.)