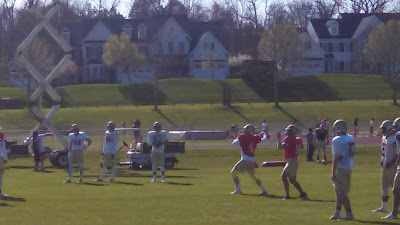 This Saturday, Lehigh football fans will finally get a chance to get a free sneak peek at the 2016 Mountain Hawks at Murray Goodman stadium.

Scheduled to start at 11:00AM, it will be a bit of a different spring game than usual, due to the fact that it will be a no-tackling practice, unlike the one I happened to catch that was partial tackling.

"We never had a full practice that was all tackling," head coach Andy Coen told Lehighsports.com.  "I picked about three practices where he had at times, full contact. We never put ourselves in a situation where we were doing too much. I do believe if you want to get good at these things, you have to practice them. We've been using a lot of the techniques that the Seattle Seahawks have utilized over the last couple of years, and those techniques have been very productive for us.  We're getting a lot better with our technique and are coaches are doing a great job of staying on top of our kids regarding technique."

So considering that this spring game will be a little bit different than other ones we're used to, what can we expect to learn?  Plenty, fortunately.


1.  Sophomore Surges.  On offense, I like to think that the biggest steps forward come from sophomores in a general sense.

When a freshman is thrown into the fire in August, their first waking moments in college, there isn't time to do much more than learn the playbook and see how far you can get before the home opener.  But the spring session, without the pressure of a critical game in a month, is a chance for talented freshmen to get the reps and time to develop the techniques that make them better Division I players.

Certainly Lehigh fans saw lots to get excited about in regards to the future of the program on sophomore QB Brad Mayes and sophomore RB Dominick Bragalone, who stepped right in and made huge contributions.  What I'll be looking at on Saturday, though, is how much of a jump both of these guys have made after a full spring, as well as other offensive players like sophomore RB Micco Brisker, sophomore RB Nick Thevaganayam, sophomore WR Connor Bianchini and sophomore WR Luke Crisitiano, among others.

2.  Trench Continuity.  Coach Coen has been vocal on how injuries have affected the spring session, but also has been very high on how senior OL Micah Tennant, sophomore DL Harrison Kaufman, sophomore DL Julian Lynn and senior NG Jimmy Mitchell have gotten better during the spring.

It's unclear as to how this will be best demonstrated on Saturday, but the push on the D line and the protection from the O line is something I'll be watching as well.

3.  Who's Leading At DB?  Senior CB Brandon Leaks and junior CB Quentin Jones will be a part of the defense that will be most shaped by the graduation of the last class.  With sophomore S Sam McCloskey expected to step in and play one of the two safety spots, that leaves a lot of players with a chance to make the two-deep, like junior DB Marc Raye-Redmond, sophomore DB Donavon Harris, sophomore DB Kareem Montgomery and sophomore DB Devon Polanis.  Just like the offense, it will be interesting to see which sophomores in the defensive backfield can step up and establish themselves.

4.  Rovers.  Last season, senior ROV Laquan Lambert and senior ROV Joe Barrett were lost in consecutive weeks in September, causing a rotating cast of characters to play this important position in Lehigh's defense.  The silver lining might be that both of these guys will have another spring under their belts to compete for No. 1 on the depth chart, along with senior ROV Evan Harvey and sophomore ROV Matt Butler.  While it seems destined that all four players will find some time on the depth chart here in the fall, it will be interesting to see who has the edge.

5.  Turnovers.  Lots has been made of the storyline of "staying healthy" this spring, but the other aspect of spring that shouldn't go unnoticed is that of turnovers.  Coach Coen wants to cut the number of unforced errors on the offense next season, and it's been a point of emphasis this spring.  While folks will be focused on pass completions, yards rushing and touchdowns, it could be that the numbers offensive players don't want to accumulate - fumbles lost, interceptions - might be circled on the coaches' grading sheet when all is said and done.