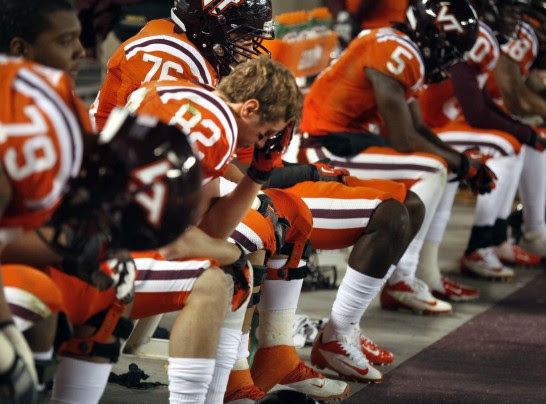 Being a college football fan sometimes means being disappointed.  It comes with the territory.

Disappointment comes in many forms.

In the Lehigh football world, there's the type of disappointment when a non-Lafayette game is lost, like when, say, the Mountain Hawks underperform in a loss to Yale.  While you can be upset that the Bulldogs push you around in your own house, the disappointment abates, eventually.  You get a bunch of really good wins, win the most important game on your schedule, and the disappointment fades away.  You move on, the Yale game an aberration in a mostly terrific year.

But recently, a bunch of Lehigh football players disappointed for a different reason.

What they did isn't exactly a secret, but I thought it worthwhile to say exactly what such news does to huge fans of the Lehigh football program, like myself, and how it affects many of the other passionate Lehigh fans that are a part of the great Lehigh football community.  It's not pleasant, but it is real.

The exact term I used when I first heard about the incident was "dumbasses".

Somewhere in the early hours of November 8th, two former Lehigh football starters and some underclassman teammates and former football team members went to the house of whom they thought was a rival fraternity president with bad intentions.

Unfortunately for them, they picked the wrong house and vandalized the wrong property.  Things were violent.  There were arrests, and suspensions from school.  The legal process will keep working.

When I read something like this, my first instinct is to try to assign blame.  Who on earth would do this?, and,  Why would we have people like this in our football program?

That's not to make excuses for the players, and contrary to some collegiate fan bases, I think, Lehigh fans pretty much want to see them all expelled.  With the pride Lehigh fans have in running a program the "right" way, they don't have a lot of tolerance, or patience, for numbskull behavior, whether in the confines of athletics facilities or elsewhere.

And as football players and athletes, like it or not, they are held to a higher standard than the regular student body.  And sadly, as they learned, the consequence for misbehaving and not meeting that standard are severe.  If you do something stupid and get caught, it can go national.

Furthermore, later in the spring, once the legal process plays out, the former athletes will discover if they'll be able to finish their degrees, or their undergraduate work at Lehigh.  Some will almost certainly be expelled.  The others, it will remain to be seen.

Personally, though, I am not so much mad at these players as I am disappointed, and I want to emphasize that.

I know, as a fan, I set a very high standard for my expectations of Lehigh's football team.  I expect championships, wins over Lafayette, FCS playoff games.   I realize the players make lots of sacrifices for this game and the Lehigh football program.  They are giving up time, energy, and facing potential injury, to not only pursue the game they love but to meet these high expectations.  My job is easy; I have only expectations.  The players' jobs are much harder.

Unfortunately, when you fail to meet the expectations in that "good citizens" department, it's not the same as not meeting expectations for performance in the Yale game.

Sometimes, doing something that lands you in jail and puts you in danger of expulsion is far deeper than the disappointment of fans.  You not only embarrass yourself and get yourself in a heap of trouble, you also put your mugshot (literally) broadcast across the country.

As for me, and this may strike some people as odd, but I'm willing to forgive.  Despite the idiocy of what happened, I'm rooting for these guys to get past this.  Just not necessarily as a part of the Lehigh football team.

I don't think rooting for young men to get past a setback, even one as numbskulled as this, makes me a weak person.  The 2015 senior class chose the theme of this last team as "family", and it was particularly apt in terms of what happened, ironically enough.

One of the interesting things about being a part of the Lehigh football "family" is that it doesn't end the second you graduate or stop playing.  Football players after graduation encounter successes and overcome disappointments.  To me, that doesn't stop after one idiotic thing you've done.

You don't choose your "family", and you don't stop rooting for them even when they do stupid things. You might get disappointed when they make boneheaded decisions, but you root for them and pray for them to get past them, even though (perhaps) some or all of them have forfeited their right to ever play football for Lehigh ever again.

People might think that's strange, but I don't.  It is very possible to condemn disappointing behavior yet attempt to try to support people who are trying to get past it - if they want to get past it.  I will be the first to condemn the behavior.  Hopefully I'll be one of the last to stop rooting for people to get their stuff together.

Some people reading about this boneheaded incident get mad, or laugh, or dejected when they read something like this.  Not me.  I just get disappointed.