The Rivalry Is Out in Paperback! 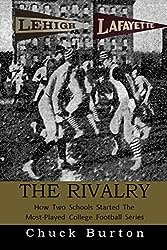 I'm real excited to announce that the book is finally available!

The Rivalry takes a look at the early days of the Lehigh/Lafayette football rivalry, and how Lafayette College and Lehigh University were founded, how their athletic departments were created, and (of course) how the football Rivalry got to be as emotionally and fiercely contested as it is.

There's lots of new information from newly-available archives regarding Asa Packer, Ario Pardee, the founding of both schools, and the origins of athletics at both schools.

This year is Lehigh's sequincentennial, 150 years since Lehigh was founded.

Because Lehigh wanted to rush their inaugural university year to compete with Lafayette for students. Lafayette, thanks to the largesse of Ario Pardee, was developing engineering as a discipline, and Lehigh's trustees, including Asa Packer, wanted to make sure that they were able to get the best students.

That's just one of the many stories you'll discover in The Rivalry.  Available now!

(Hoping to also have this available at your local bookstore soon!)

Buy Me On CreateSpace
Buy Me On Amazon (Kindle or Paperback)