Romp At Home Shows "Back To The Future" for Lehigh Offense 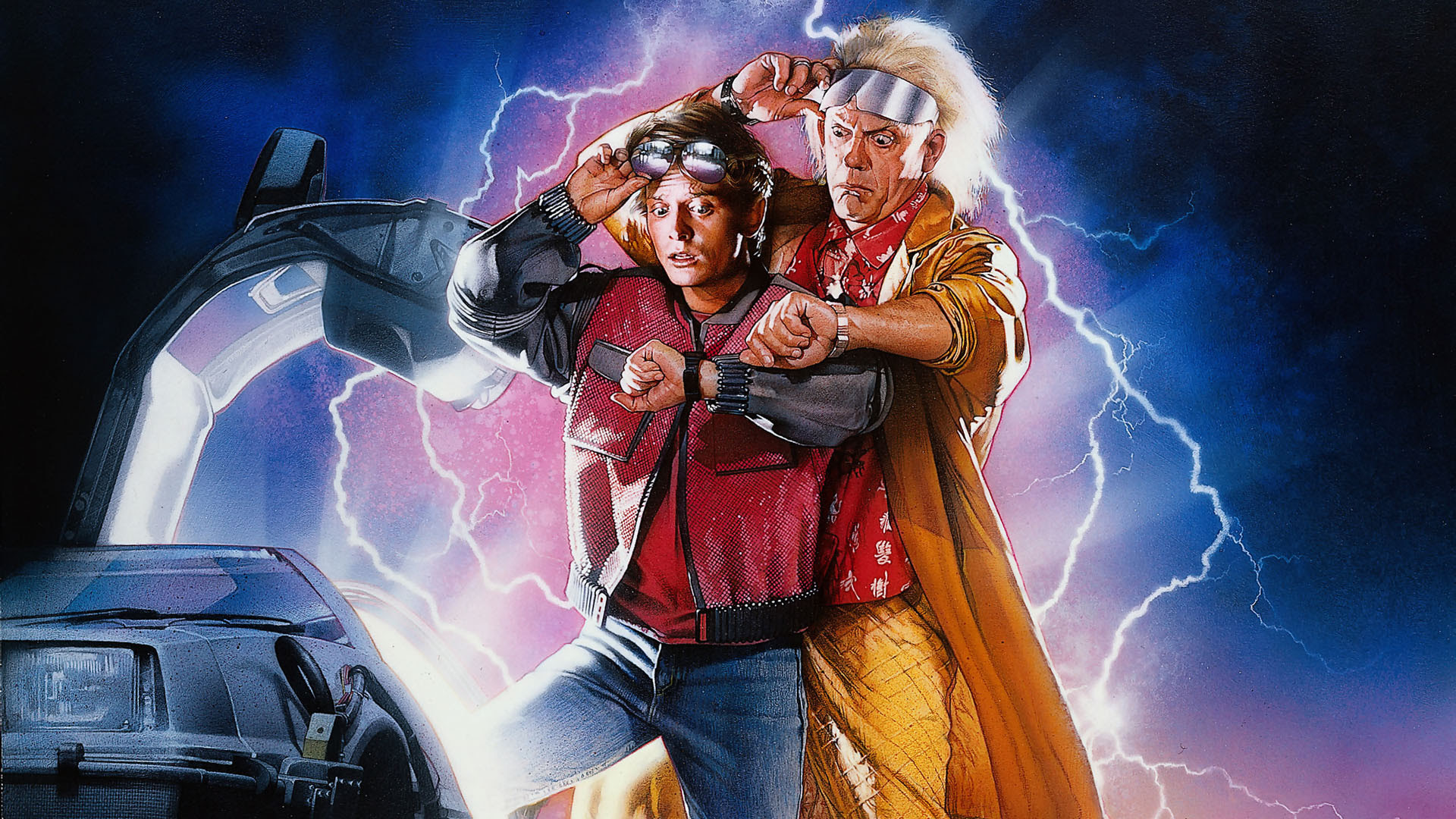 It is not my favorite movie by a longshot, but this week my family and I watched Back to the Future, the seminal Robert Zemeckis coming-of-age movie starring Michael J. Fox and Christopher Lloyd.

I've always felt it's an OK, meh movie.  It seems to rely on gimmicks and time gags ("What's a rerun?") to get its yuks, and it has no business being as beloved as it remains to this day.  My wife and my son loved it, as they have their own minds and, in our family, you're allowed to like what you like without criticism.  I watched it, happy they were happy, and amused.

In the back of my mind while watching Christopher Lloyd attach the cable to the tower clock, I was worried about Penn.

The consequences of a loss in this game to the 2015 season would have been severe.  The Mountain Hawks were already coming off a rough 55-17 loss to James Madison, one where criticisms of the team, the coaches, and players were starting to be heard.  A 1-2 start heading into two tough out-of-conference games versus Princeton and Yale could have the Mountain Hawks staring down a 1-4 start going into conference play.

Instead, Lehigh would crack 40 points at home in a 42-21 win over Penn, scoring six touchdowns and for the most part controlling the game in a way that wasn't seen in a while at Murray Goodman Stadium.

With a three touchdown win and the Mountain Hawks dropping 40 points at home, are we... Back to the Future?


For fun, I dialed up 1955 and 1985 in the LFN time machine in regards to Lehigh football seasons of that time.

In 1955, Lehigh was in the middle of a fairly successful 7-2 season under the tutelage of legendary head coach Bill Leckonby.   Five years removed from their incredible undefeated season of 1950 (which was honored at halftime of the Penn game this Saturday, incidentally), the "Packers" only cracked the 40 point plateau once, a 51-19 dismantling of Albright as a tune-up to the Rivalry game against Lafayette.

"The charges of Bill Leckonby scored their first touchdown before most of the fans had a chance to shed their blankets," The Brown and White reported.  "After a quick exchange of fumbles, QB Dan Nolan kept the ball on the option play and raced wide around left end for 70 yards and a Lehigh six-pointer."

1985 was a bit of a tough year as well for the Lehigh Engineers, but it featured should-be-hall-of-fame head football coach John Whitehead's final season, a thrilling win over Lafayette, 24-19, and the senior years of two legendary Lehigh football offensive players, QB Marty Horn and WR Rennie Benn.

Lehigh scored more than 40 points once that season, oddly enough during the home opener versus Division II Indiana (PA).  In a shootout, Horn connected with Benn for five touchdowns, breaking a slew of passing record in the process, 49-41.

"The Engineer defensive secondary was non-existant (sic) as they allowed 512 total yards as IUP QB Rich Ingold passed the Big Indians downfield almost at will," The Brown and White said of the game, though Horn and Benn's five touchdowns were also highlighted.  Benn's final touchdown came off a deflection, landing in his hands in the end zone for the 7th TD.

In 1955 and 1985 on Lehigh you see the evolution of two completely different styles of football.  Leckonby's Wing-T was a grind-it-out, option-attack team run by Nolan, while "Air Lehigh" was in full swing in 1985 with Horn and Benn leading one of the top 10 offenses in all of I-AA at the time.

Lehigh's offense in 2015 is neither the pass-intensive team of 1985 or the grinding rushing game of 1955.  Instead, offensive coordinator Drew Folmar's style of offense, in reality, could be considered a mixture of both.

"I had talked to Drew even before we brought Dave [Cecchini] back here [as offensive coordinator]," Coen said. "What always impressed me is how [Drew] tutors quarterbacks. He came in here in a tough situation with the group of guys we had at quarterback, some guys who were injured. He had his struggles getting the right guy on the field and then had to get them schooled-up. There was never a question in my mind about Drew's ability. I knew he was a very good coach. The kids really like him. He's a fiery guy."

Coach Coen has repeatedly stressed the need for balance on offense, and Folmar's system, though tilting a tad towards the run, is actually fairly balanced between pass and run.  Taking last week's box score, Lehigh got 13 first downs rushing the ball, and 12 passing.  Total yardage on offense was 245 yards rushing, and 250 yards passing.

"At times, we looked really good on offense last year," Coen said after the game. "But it was great to see [against Penn] the kind of offense I have envisioned. Hopefully, we can replicate it week after week."

It's also an aggressive offense, one that sometimes will see Lehigh go for it on some of these 4th down situations.  In different spots during 4th down conversions versus Penn, sometimes a running play was called, other times a pass.

"Since it was Penn's first game, we wanted to play an up-tempo deal," Coen said Saturday.  "We trusted our kids could get that done.  I think the kids like the aggressive nature of how we're doing things."

That balance all starts with the quarterback, and the growth in junior QB Nick Shafnisky's confidence and technique is very evident.

"Coach Folmar is a great coach," Shafnisky said after the game on Saturday. "He's a guy who dots your I's and crosses your T's and gets the fundamentals down. What we do in individual sessions carries over to games. We'll be watching film and see something and he'll say 'We're going to drill on this.' And it's funny, but the little drills that you think aren't necessary make a big difference. He's made me a much better quarterback."

What I've seen in Shaf's play are things like throwing the ball away if nothing develops.  It may sound strange to celebrate your quarterback hucking the ball to the popcorn man in the fifth row, but there were times last season when Shaf tried to force the action and he'd get intercepted.  When he throws the ball away, he's more in control of the drive, and it makes it seem like he's more in control of the game.

Repeatedly on Saturday his number would be called, and repeatedly his running would create a first down, or indirectly create a touchdown.  One play last week, when he scrambled right and lured the Penn defense right with him, he threw the ball across his body to a wide-open senior WR Stefan Sansone, exactly the sort of play he might have not been able to pull off last year.

Shaf's seemed at his most animated in the post-game press conference when talking about the rest of the players around him, heaping credit on his offensive line, receiving corps including sophomore WR Troy Pelletier and junior FB Kenny Crawford.  It's not often that a quarterback talks about how excited he was to proceed successfully through all his progressions, but Shaf did just that.

"He had a little check burst, and then I went through the reads, I see him come open..."  Shaf said of the key play on Saturday's game.  "If he went down right away from that first tackle, we weren't getting that first down, but he broke three tackles on that play.  To see that from Kenny, I got chills out there.  I looked at Kenny, and I just started screaming at him.  I was so hype on that play."

If 2015 is indeed "Back to the Future", it's not hard to envision Shaf blossoming into the type of quarterback that featured on those 1985 and 1955 teams - the running ability and grittiness of Dan Nolan, the athleticism and ESP that Matry Horn seemed to have towards passing to his receivers.

And there's also a touch of the guy the media saw back in August - the guy that loves to "prove the haters wrong," in his own words.  You get the impression that all week he might have been dying to get out there to prove everyone wrong, to prove the nation wrong, to show that the Lehigh offense is not dead, is not the team that only managed 17 points down at James Madison.

With Shaf at the helm, Folmar coming up with the offensive gameplans, and Coen pushing things on offense, it feels a little bit like back to the future for this Lehigh offense, a foggy mix of the best of 1955 and 1985.  It feels like it could be the start of something really good this season.