"We told the kids to go in and watch the tape from a year ago," head coach Andy Coen said in this week's preview of the James Madison game from The Morning Call.   "We probably should have won the game. We missed three field goals. That was the difference. We had a great opportunity to beat them."

There was a lot of frustration in last years' 3-8 season for the Mountain Hawks, but the 27-24 opening weekend loss was probably the second most frustrating.

Let's be blunt; Lehigh had James Madison on the ropes.

Whether the Dukes were in the middle of a letdown after their 52-7 loss to Maryland the weekend before, whether their talented team wasn't ready for Lehigh's best shot, whether the Mountain Hawks played the games of their lives, it didn't really matter.  With just about 12 minutes left, Lehigh had the ball at midfield, up by 4 on James Madison and the opportunity of opportunities to put the game away.

Two penalties, a punt and 98 James Madison yards later, the Dukes would take the lead and never give it back.


"They are a very talented football team," James Madison head coach Everett Withers said after the game last year.  "Coach Coen has done an unbelievable job with this program.  They're a tough team, a physical team.  They were not somebody where we came in here and said, 'Wow, these guys are all of a sudden good.'  We knew that coming in here."

Lehigh has the odd distinction of being the first team Withers has seen the second time around, and this week he was asked about last year's game as well.

"We had some circumstances in that game with the lightning delay, and I remember it was a really hot day at Lehigh last year," he recalled.  "We didn't play real well in the first half, but we came back and started playing better in the second half on both sides of the ball and the kicking game.  Having that experience we feel a little bit more comfortable about who they are and what they want to do."

After that game, both James Madison's and Lehigh's seasons went in separate directions, seemingly propelled by the outcome.  The Dukes went to 9-3 and went to the playoffs; the Mountain Hawks, as we all know, dribbled to 3-8.

Withers mentioned that he knew that this was a big game this time around for the Mountain Hawks.

"This is a big game for them, for them to go on the road and test to see where they are." he said, obviously having gone over the Lehigh game film and easily able to rattle off nearly the entire box score for last week's game.  "I think this is a tough football team.  Coach Coen has done a really good job instilling toughness in his football team.  This is going to be a battle of toughness upfront on the offense and defensive lines."

Indeed it is, on all counts.

The game on Saturday in Harrisonburg, Virginia at 4:00 PM will be at Bridgeforth Stadium, the largest venue Lehigh has played at since last year's game at Yankee Stadium.

In some ways 24,000-seat Bridgeforth stadium is even more impressive than the 19,200-seat stadium where Liberty plays.

In fact it betrays James Madison's not-so-secret dream: to join the ranks of FBS.

Then there's the new locker rooms.

Everything about this situation screams "We want to go to FBS".

The question has always been, however, where.

Do they hope for a Sun Belt invite?  Some fans have said yes, but the athletics department has seemed quite upfront that they have little desire to compete in a sprawling conference that has Georgia State, Louisiana-Monroe and Texas State as members.

Do they try to get into the MAC, with schools like Kent State, Akron, and Ball State?  Possibly, but the geography of the conference is less than ideal, without any real travel partner and a lot of conference games spent versus Eastern, Central, and Western Michigan might not be some fans' vision of FBS competition.

Better options might be Conference USA, with a built-in conference rival from their CAA days in Old Dominion, or perhaps even the AAC, where the Dukes fill in a territorial gap between Cincinnati, East Carolina and Temple fairly well.  But there's no indication that either of these two conferences are interested in adding any new members, especially a potential start-up to the FBS world.

From Lehigh's perspective, it could be said that James Madison is the equivalent of an FBS game for them this season - a big-time game in a big-time venue with a big-time atmosphere.  You can guarantee that purple and gold streamers will be flowing right before kickoff.

Everyone that's a part of Lehigh football knows the score.

“Winning this game would just continue to grow our confidence heading into the home opener against UPenn,” senior RB D.J. Kee told The Brown and White. “Everyone from the coaching staff on down has been using the loss last year as fuel for this upcoming game.”

Senior WR Stefan Sansone also was excited to see that even after beating Central Connecticut the right attitude was had before coming into this weekend's game.

"What I liked hearing in the locker room was that guys weren't satisfied," he told Keith Groller of The Morning Call, echoing what I had heard from sophomore WR Gatlin Casey last Friday. "Guys were excited, were saying that they should have had more catches or more sacks. That's the type we want to have because it shows that guys want to be the best they can be.  We’re really excited about this opportunity to go there and play them, in hope to leave with a win after falling short last year."

It's a matchup of two teams that are the same, yet very different from last season.  But it's Lehigh that wants to go in to be tough and to prove people wrong, as junior QB Nick Shafnisky has said several times over the course of these last few months.

If they can pull of the upset - and make no mistake, it would be, with James Madison ranked in the Top 20 of all the major FCS polls - beating JMU would be Lehigh's ultimate proved-you-wrong moment.

Lehigh's game notes show a bit of shuffling on the offensive line from last week, with sophomore OL Tim O'Hara getting more extended time after junior OL Even Sweeney got banged up last week.  Senior OL Matt Cohen was also pressed into service when junior OL Micah Tennant picked up a knock as well, but the same unit that was a huge factor in icing last week's game will be the starters this week vs. JMU.

The Morning Call also revealed the important news that sophomore WR Troy Pelletier was listed as "doubtful" for the game at James Madison, and senior LB Laquan Lambert would not be making the trip to Harrisonburg.  Sophomore WR Gatlin Casey, who slid right into Pelletier's receiver spot and had the best day of his young career, will go if Pelletier cannot, and junior LB Joe Barrett steps into Laquan's spot as well, with senior DB Randall Lawson backing him up.

Interestingly, there is a chance weather might be an issue at Bridgeforth stadium at 4PM on Saturday.  While it would be really something if another James Madison/Lehigh game had a lightning delay, it is a possibility with an early 60% chance of scattered thundershowers.  One thing it should not be is excessively hot, however, with gametime temps most likely at or around 75 degrees. 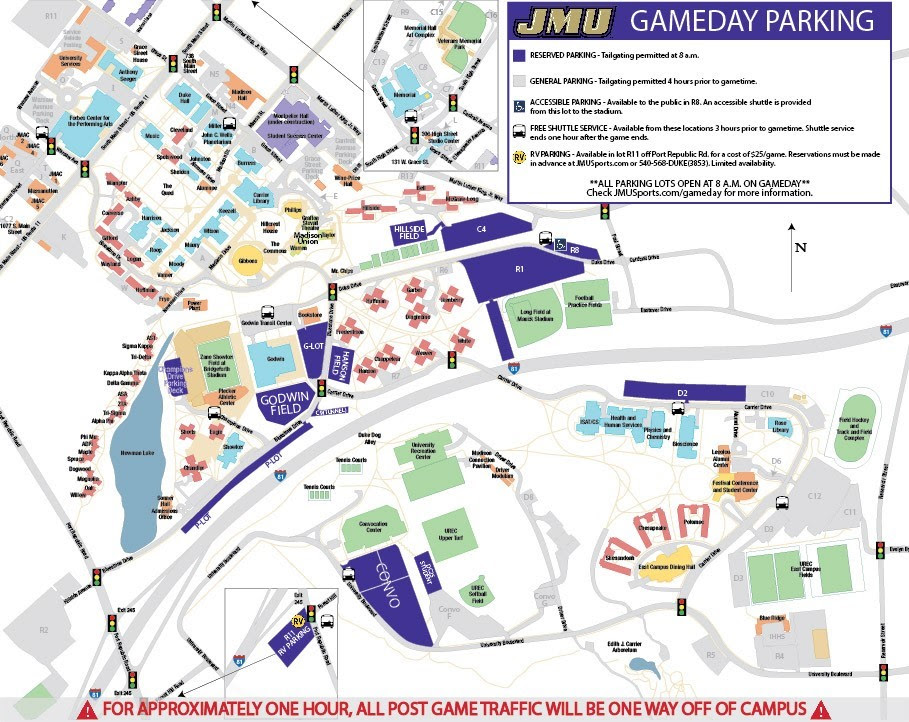 One of the great benefits of a 4PM kickoff is the extended amount of time available to tailgate.  James Madison's Dukes Gameday page helpfully tells us that lots are available up to four hours before kickoff.  The aforementioned page details the different lots.

The stadium will be packed thanks to two different gameday promotions this Saturday: the Great Madison Campout, where Boy Scouts and Girl Scouts will have a night camping on the stadium turf, and High School Band Day, where more instruments than usual will be contributing to the big-time atmosphere.

There's also a chance you may see this walking around the tailgates.

Like the rest of the nation, members of the James Madison family were horrified to learn that Alison Parker was gunned down in cold blood along with her cameraman Adam Ward on a live broadcast on WDAJ.

Parker was a Dukes alumna and her death hit James Madison hard.

As a result, James Madison decided to add helmet decals this season to honor their fallen alumna in a very classy move by coach Withers.

They will be wearing the 7 decal with Alison's and Adam's initials.

That can only mean one possible drink on an afternoon like this - Virginia Sweet Tea.

If you believe this website, Sweet Tea is something difficult, supposedly, to make - though it doesn't seem like it to me.

Heat about a gallon of boiling water and tea bags in a huge pot, add sugar and a fifth of bourbon (the most important part of making it the "Drink of the Week"), and then chilling it until ready to serve.

Garnishing with lemon and mint is the perfect finishing touch, and something great to sip while waiting the four hours until kickoff.  Crush the mint a little, making it a bit like a tea-flavored mint julep.