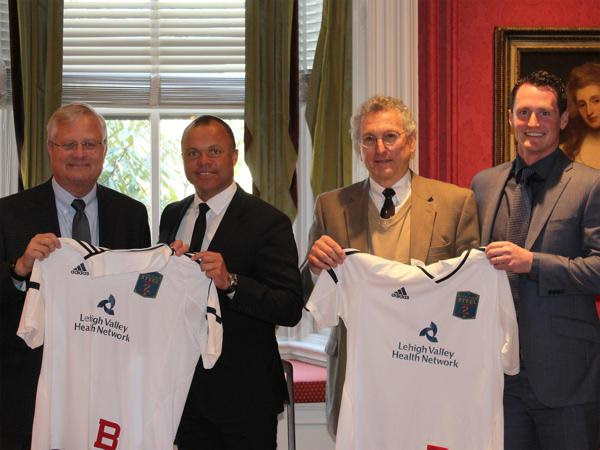 Normally an event at Murray Goodman Stadium in August would involve Lehigh's football team, either involving pictures for the upcoming season, or perhaps a scrimmage.

Not this Wednesday, however.

The announcement was largely expected in soccer circles, but yesterday's announcement confirmed that  the ownership team of the Philadelphia Union, they of Major League Soccer, were going to be launching a USL franchise in the Lehigh Valley, to be playing games at none other than Murray Goodman Stadium.

It's a great thing for the Lehigh Valley, and a fantastic opportunity for Lehigh Atletics, too.

"We're flattered that the Philadelphia Union leadership thought highly enough of our facilities here at Lehigh and our Lehigh Valley community to want this area to be the home of one of their teams," Lehigh University President John Simon told the assembled media at the home of Lehigh football.

The CEO of Keystone Sports and Entertainment LLC, Nick Sakiewicz, represented the Philadelphia Union, which Keystone Sports owns, and was reportedly impressed by two very key elements of Bethlehem.

The first is its embrace of its historic Bethlehem FC and Bethlehem Steel F.C. teams dating from over 100 years ago, essentially created by then-Bethehem Steel CEO Charles M. Schwab (not to be confused with Charles R. Schwab, founder of the financial company).

C.M. Schwab was a powerful, risk-taking executive for Bethlehem Steel.  He wasn't only the CEO of Bethlehem Steel, he also was a very rich man who was a booster of Lehigh and specifically its football team.

He was the financier that helped Bethlethem Steel fund Lehigh's Taylor Stadium, the veune where Bethlehem Steel F.C. would play some of their bigger soccer games.

When one of his executives had a dream to sponsor a world-class soccer team, he allowed it, and making Bethlehem Steel FC the best professional soccer team in North America during its time.

But what really sealed the deal, according to Sakewicz, was the SteelStacks World Cup viewing parties this year and last.

Steelstacks, an arts area on the site of the old Bethlehem Steel factory, broadcast both the US Men's and US Women's National Team runs through their respective World Cups.

To Sakewicz, it showed that people in the Lehigh Valley area weren't only soccer fans, but they were willing to travel from long distances to be a part of the soccer landscape.

"We just started to understand this marketplace and its magnitude and then ... 10,000 people watching the Women's World Cup final at ArtsQuest was kind of the icing on the cake for us," he said. "We just said that we've got to be here."

It was this, and political forces between the Union and their quasi-independent Harrisburg USL affiliate, that perhaps spurred the Union to action.

So far, the Union have done a lot of things to spur a lot of excitement in the Lehigh Valley for the latest pro franchise to relocate in the Valley (some things that, full disclosure, I'm very excited about, for example the name the team contest where I will be lobbying for the name to be something along the lines of BethSteel 1913 F.C.)  Season ticket deposits, very reasonably priced at $25, are also available for the upcoming 2016 season.

And mission one for the Union is to develop the USL team to do what other AAA-like affiliates of Major League Soccer haven't done yet: fill a large stadium.

"With everything we do, we try to do it first class," Sakewicz said. "We picked this stadium because we want to fill it. We're going to see how the market responds ... We think we have a shot at filling it and that's going to be our goal."

The Lehigh Valley USL franchise's best chances to fill the stadium will come twice next year.

The first would be when the Union's former USL-affiliated franchise, the Harrisburg City Islanders, come to town.  The seeds have already been planted for a healthy rivalry between the two franchises.

The second would be during the U.S. Open Cup, a competition where all levels of soccer get to compete for a soccer championship.  Want to see European superstars like David Villa and Frederick Lampard compete in Murray Goodman Stadium?  With the U.S. Open Cup, that possibility is very much in play.

Murray Goodman Stadium, which can hold in excess of 16,000 crazed football fans, was the perfect venue for the as-yet-unnamed Lehigh Valley soccer franchise - with a catch.

It will be a year-to-year lease, meaning, if the Union are able to open a soccer-specific facility in the Lehigh Valley, perhaps in Allentown, they reserve the right to exit their lease with Lehigh and relocate their home games to that new stadium.

For Lehigh, that could mean that the excitement about this announcement could be, sadly, short-lived.

Lehigh's soccer programs can benefit immensely from this arrangement with the Philadelphia Union.

The Mountain Hawks already have a relationship with the Philadelphia Union's PDL team, which also happens to operate in the Lehigh Valley area.  The Lehigh Valley United Sonic (full disclosure: they really need to work on that name), already feature rising Lehigh sophomore Doyle Tuvesson, who scored a hat trick in one their recent games.

With the Union managing both the equivalent of an A-league affiliate and a AAA-league affiliate, the chance to have Lehigh train with and work with Union representatives is something that can't really be measured in terms of dollars.  (Though there are no plans for a women's academy to go with the men's, many soccer clubs in Europe do also host soccer academies for women as well as men, so it's not out of the realm of possibility that the Union do something like that in the Lehigh Valley, too, perhaps even managing a women's soccer team to compete in the national women's soccer league.)

But that working relationship could be lost if the Union pack up and head to Allentown.

That's why it's such a good idea to try to build on this relationship with the Union and make it as difficult as possible for them to want to leave Murray Goodman Stadium, if it comes to it.

Not only would it be a first-class experience for the fans of the USL team - an experience that could eclipse that of the Riverhounds in Pittsburgh, for example - it would also have many benefits to the Lehigh University community as well.

Home football games would have all the great features the games already feature, with a gameday experience that would make them even bigger events.

Graduations held at Goodman would also feature the graduating students on a big stadium video display - a thrilling, once-in-a-lifetime event.

Adding lights would add to the flexibility as to the possible events that could happen at Murray Goodman, whether it be nighttime soccer games, nighttime football games.

And a video display, as shown by the many multimedia presentations at Yankee Stadium during the 150 meeting between Lehigh and Lafayette, can really be a great way for the University and the Patriot League to display its educational message to a wide audience in attendance.

I would suspect upgrading seating I think could also be a part of such a renovation, again for the comfort and experience of the fans.

I don't know how much all this would cost, but it seems like it could be done without a ground-up renovation of the whole place.

And it seems like such a win for Lehigh to do this on a multitude of levels.  It would upgrade the experience of being at Murray Goodman for current students - and have a positive secondary effect of making it difficult for the Philadelphia Union to leave for a smaller, less grand soccer-specific stadium which they would have to finance and build themselves.

The Philadelphia Union and Lehigh have gotten together and come to a wonderful agreement that will benefit Lehigh Athletics and the Union for as long as it lasts.  Here's hoping that both side use this relationship to make even bigger and better things for both sides.