Lehigh Works Out Its Bad Karma, Gets First Win, 31-14 Over Cornell 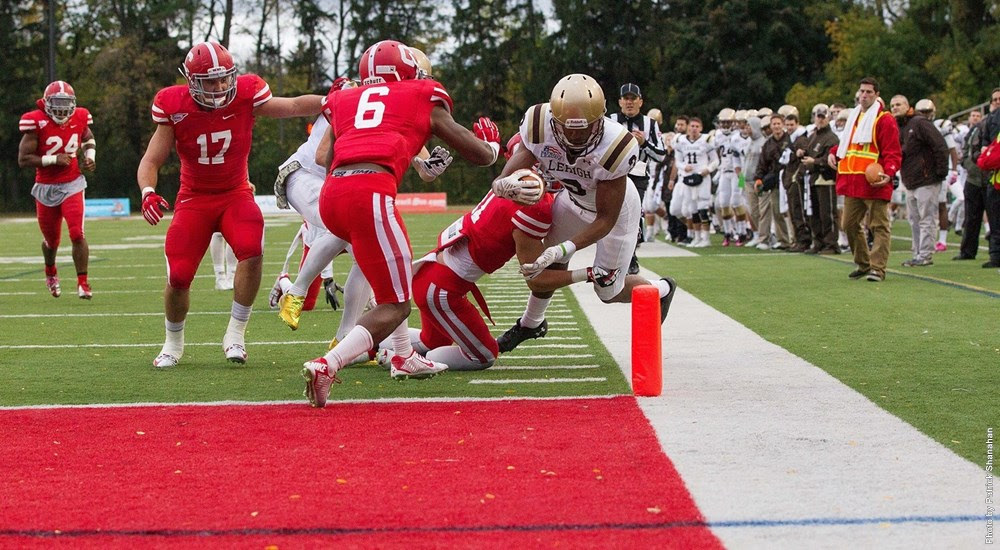 There have been times this season that Lehigh has been agonizingly close to winning games they have ended up losing.

It's as if they've been stuck with bad karma; that they've been oh-so-close to winning, but some bad karmic event keeps them out of the victory column.

Against the Big Red on homecoming this weekend, the Bad Karma seemed to be at Schoellkopf Field for Lehigh once again.

A well-defended pass bounced into the hands of Cornell WR Collin Shaw set up one Big Red touchdown. and a low snap to punter junior P Austin Devine set up another, making a 17-0 Mountain Hawk become a very slim, thin-feeling 17-14 spot for Lehigh.

But then just like that, the Lehigh offense seemed to have finished with its bad karma, with senior RB Rich Sodeke leading the charge to set up one big touchdown, and scoring the final exclamation point on Lehigh's first win of the season.

It all added up to a satisfying return to winning for the Mountain Hawks.


"After the two fluky touchdowns, the offense finally figured it out and took it to them and finished in the fourth quarter," head coach Andy Coen said to Matt Markus on ESPN Radio 1230 after the game. "It was an excellent drive, all of it coming on the ground except for the one play. It was great to see us finish. We haven't been able to do that. We've had some leads in games but we haven't been able to finish."

All the scoring in the game came in bunches, and Lehigh benefited from some fluky plays as well.

Up 3-0 with a 32 yard field goal by junior PK Ryan Pandy, Lehigh's found itself with a 1st and goal after junior WR Stephen Sansone ripped an apparent interception away from Cornell CB Del Barnes, allowing Lehigh to set up on Cornell's front porch.   Shafnisky snuck the ball into the end zone for a quick score.

“We dug ourselves into a big hole early, and then really, really played well, especially on the defensive side of the ball, to fight our way back in it,” Cornell head coach David Archer said. “Our young offense, they just fight, and they fight, and you can see that they make big plays to get us back into it, and ultimately we ran out of gas at the end. We fought incredibly hard, but we spotted them too many points early.”

“That was a game changer,” Archer continued.  "We emphasize ball security a ton, and [Lawson] did a really good job taking it away.  They made a play there."

From there, the game became one of field position for both the Big Red and Mountain Hawks,  Devine and Cornell P Chris Fraser combined for a grand total of 16 punts, with both Devine and Fraser both notching one punt apiece over 50 yards with the wind at their backs at gusty Schoellkopf field.

Several Cornell drives were stuffed by some big play by the Lehigh defense, with senior DT Tim Newton with a big day (2 tackles for loss, 1 1/2 sacks), and an inspired effort by the entire secondary, with interceptions by sophomore CB Brandon Leaks and junior SS Laquan Lambert.

As good as the defense was, probably the best part of the game for Lehigh fans was how the offense took charge of the game in the 4th quarter when the score narrowed.

Riding the back of senior RB Rich Sodeke for 37 of his 147 rushing yards on the afternoon, Shaf did a masterful job of keeping the ball safe and converting big 3rd down plays, none bigger than a 19 yard pass to senior WR Josh Parris to get to the Cornell 2.

"I was pleased at how we were able to finish the game running the football,” Coen said. “That was a really nice drive, really kind of established our run game.  That’s what we needed, it was a long time coming for us.  We did a good job of responding to some adversity in the fourth quarter when Cornell was making a run, and I think that’s something we can really build on. But getting the win was most important, no matter how ugly it looked at times.”

Shaf would sneak it in again as Lehigh Nation sighed in relief, while Sodeke would get an very, very well-earned touchdown when the Mountain Hawks forced Cornell to turn the ball over on downs the next play.

"It has been way too long, but it feels good to get this win," Coen told Markus. "I'm happy for our kids. We played well today, but there were still way too many penalties and procedural-type things. Obviously it's going to be nice to coach off a win for the first time."