It didn't really need to be mentioned by head coach Andy Coen and the coaching staff, because everyone already knew.

They all remembered last year's beatdown by Bucknell at Lewisburg, 48-10.

Many of them, even the sophomores, remember the pain of that day.

They also remember the humiliating exclamation point: sophomore RB C.J. Williams' hurdle over Lehigh's secondary, getting an emphatic touchdown to put the icing on the cake.

Sometimes the pain of losses of games gone by can seem distant, unconnectable, by the playing members of a football team.  There is no way for these players to imagine how it felt in 1997 for the Mountain Hawks to lose to the Bison, for example, the last time a Lehigh team had lost to Bucknell in football before last season.

But last year's loss was so raw, so emphatic, and so emotionally charged that nobody on this team could have possibly forgotten how it felt to go in there and lost that badly, that comprehensively.

There was no need for coach Coen to invoke revenge in a fiery post-practice speech.  They know. 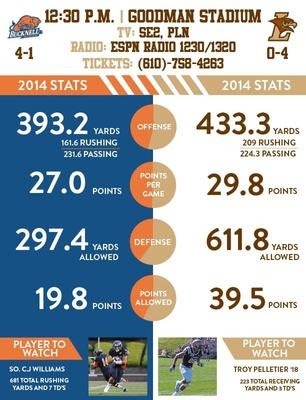 "This [game] has a lot of emotions to it, since last year they embarrassed us," senior FS Jason Suggs said. "That really hurt us and maybe messed us up for the rest of the season last year.  When you lose like we did to them last year, you can't help but remember it.  You have to use it as motivation. It wasn't who we are or what we want to be. This time, we want to show them what we're all about."

A guy that was angry two weeks ago in the post-game press conference was senior RB Rich Sodeke, who gruffly said "No Comment" when I asked about the team's consideration of their season motto this season, "There's No Tomorrow".

It seems like coach Coen's biggest takeaway was that everyone, from the players to the coaches, needs to be angrier, and play a bit angrier, in order to get the season back on track.

Emotion did seem lacking in last year's game against the Bison from the Lehigh side, where complacency, and more than a decade of wins against Bucknell, probably had some effect.

But Bucknell was more than ready last season, and it showed in every phase of the game, recovering a fumble on the opening kickoff and never giving Lehigh a chance from the first minute onwards..

"The turnover on the opening kickoff was great for our momentum," RB C.J. Williams said after that game. "We knew this was our game to win against Lehigh. We stepped up as a team from top to bottom."

The Bison have had early success where the Mountain Hawks have not this season.  They are coming off their first loss of the year last week to Bryant, but in their other four games they have taken care of business: sometimes impressively, in a 36-20 win against NEC favorites Sacred Heart, and sometimes not, in a 20-7 grindfest against Cornell.

Some have looked at Bucknell's schedule, and seen it wanting.  While Sacred Heart is 4-1 with their only loss to the Bison - and last week, the Pioneers upset Delaware in the Tub, showing that they are a very good team to be reckoned with this year - the rest of Bucknell's wins came against three teams that are a combined 2-13.

In some ways, Bryant seemed to take Bucknell by surprise the same way Lehigh was taken by surprise a year ago by the Bison.  The Bulldogs set up two touchdowns on special teams trick plays, one a fake punt resulting in a 55 yard touchdown run, the other a fake field goal that extended a Bulldog drive for a touchdown.  Bryant grabbed momentum early in the game, and didn't appear to look back.

“Ten penalties, four turnovers and 1-for-13 on third downs; that is a combination that leads to the result,” commented Bison head coach Joe Susan after the game. “It’s a learning experience for this group. A lot of how you play is how you prepare,” sounding a lot like what coach Coen told his team.

Pass protection was an issue, too, giving up 5 sacks to the Bulldogs, and that pressure caused plenty of errors, Bryant converting four errant passes into interceptions.

But intensity will not be absent from either side this Saturday.  This won't be a case of a team overlooking anyone.  Both teams have earned that.

“When you get into the league play, I think everything kind of gets raised up a notch,” coach Coen said. “If we can just do a little bit more and do the little things better than we have been doing them, then I think we have a chance to be very competitive in the league.”

At 4-1, Bucknell has gone from perennial also-ran to being one of the most credible teams to have a chance to take down nationally-ranked Fordham in the Patriot League title race.  Two years ago, some might have scoffed at the Bison being in the mix against a team like these Rams.  This season, nobody's laughing.

In the span of one, big loss last year, Bucknell went from a team penciled in for a Mountain Hawk win to a team which Lehigh fans circled on the calendar last spring, knowing that revenge would need to be attained to finally put things right once again.  This Saturday, with this Lehigh team needing a win, there's no tomorrow.

There are a few more surprises in this week's game notes as the Mountain Hawks try to reshuffle things a bit on defense to improve that unit's effectiveness.

On the minus side, the bye week didn't heal up a lot of the injuries sustained at Yale, so sophomore RB Brandon Yosha, sophomore LB Colton Caslow and some others are not coming back this week, though they are expected back soon.

The biggest shuffle comes from junior LB Matt Laub getting moved from starting defensive end to starting outside linebacker, opening the way for sophomore DE T.J. Stubbs to start on the defensive line where he was.  Part of what has allowed that to happen is that junior DE Greg Palma and junior DT D.J. Bourgeois have emerged on the defensive line, allowing Laub to move back to what, in my opinion, is his more natural position.  It's certainly going to be an area which Lehigh Nation will be watching on Saturday.

Caslow's absence means that freshman LB Cal Coffman also shows up on the two-deep behind sophomore LB Pierce Ripanti on the inside.

On offense, freshman WR Troy Pelletier continues his rise on the depth chart, while senior WR Josh Parris now adds kickoff returner to his duties of punt returner and go-to pass receiver.  The offensive line has also seen a lot of juggling thanks to a slew of injuries along the line, with junior OL Matt Cohen and junior OL Stephen Camasta now occupying starting roles, with sophomore OL Evan Sweeney and sophomore OL Micah Tennant backing up multiple positions.  The "O" line was seen as a deep position of strength in the preseason; its depth is being sorely tested now.

At first it may has seemed like rain might put a damper on this critical game this weekend, but the  revised weather report now seems to show the showers clearing out well before the 12:30 kickoff at Murray Goodman stadium, even giving some time for the natural grass to drain somewhat.  A bit damp, perhaps, but partly cloudy with a high of 60 should be great viewing weather.

One of the most decorated novelists of his generation, Phillip Roth, graduated as an English major from the Lewisburg campus.  At first I doubted that Roth, who set many of his novels in and around Newark, New Jersey, really went there, but then I read an excerpt from The Human Stain where he talks at length about cows, and organic milk - yup.  Incontrovertible proof he did indeed go to Bucknell.

Four LFN Drinks of the Week, four losses.  It's abundantly clear I need to up my "Drink of the Week" game to get the Mountain Hawks a win, and it has to start right now.

So tonight, dear Reader, we step up in class.  Fine glasses of Pinot Noir are this weekend's "Drink of the Week" - done right, mind you, bottles opened an hour before serving, poured into a large, bowl-like wine glass for proper exposure to air, ideally resting for ten minutes before serving.  LFN's suggestion for fine, decently-priced Pinots are MacMurray and McManis, or, if you were lucky at the racetrack last week, Francis Ford Coppola's Pinot, which is nice, but relatively expensive.