In the distance, a lawnmower is heard on a bright, sunny day at Committee headquarters.  The caps and gowns from graduations across the East coast are hung up on the hooks at the door.  Half-empty bottles of scotch, and a few Yuengling bottles, litter the conference room table.

A knock is heard at the door.  A Committee member gets up from a pizza and beer-induced coma, and answers the door.

The Committee member signs for the envelope, and opens it up.  It's the complete list of recruits for Georgetown's Class of 2018, complete with a plush stuffed Hoya.

"Ah yes," the Committee member mutters to himself.  "It's May, and it's about the time that both Hoya football fans turn their attention to recruiting."


THE GOOD
The Ewings of the Gridiron, fresh off a 2-9 season, not only graduated some strong players but pretty much have a boatload of needs across the board.  With an eye-poppingly big, cross-continental 30 recruit class - including a recruit from all the way in Hawai'i - the Hoyas don't need to be skeptical about the number of bodies coming in August to compete for roster spots.

Could this recruiting class be... good?

Additionally - and this might be of concern to the Hoyas - one two-star recruit, listed as "signed" by at least one recruiting site, decided instead to walk on at another school before Georgetown's May announcement.  Whether it was just cold feet, or the fact that Georgetown doesn't participate in the National Letter of Intent program, it's difficult to say, but it's not a good development.

QUALITY = 12. 8/30, or a paltry 27%, of Georgetown's recruits had a page with the national recruiting websites.  It's worth mentioning that all the rest of the Patriot League teams scored a "grade" here of 50% or over (most notably Bucknell, who scored exactly a 50%).

This is an improvement in overall numbers from last year (only 7 had a page in last year's Hoya ratings), but not in ratio (since the class size was only 23 recruits last year, the overall percentage was higher).

CLASS SIZE = 7.  30 Recruits.  The Patsy Ratings have always rewarded quantity, and the Hoyas' Patsy rating benefited mightily from this metric.  (Whether it rewards "quality" over "quantity" is a topic of lively debate behind the Committee's closed doors.)

DISTRIBUTION = 8.  As you might imagine, all bases were covered in the area of "distribution" with such a mammoth class.  For good measure, a long snapper also appears in the distribution, even though he didn't give the class any Patsy Points.  One thing that's not a debate: Long Snappers are not part of the Distribution.

We don't care if he does provide Patsy Points... we're glad we have a recruited long snapper.

SPEED = 5.  Take special note of this number, which was determined by three Hoyas Saxas appearing on recruiting websites with one guy running a 4/58 40 yard dash.

TRIGGER = 0.  One QB graces the incoming class roster, but doesn't have a page that the Committee could find, so no Patsy Points there.

JUMBO = 5.   Five offensive linemen and three defensive linemen grace the Hoya Paranoia recruit lists.  Five of them tipped the scales enough to give them the points, which also gave the Battleship Greys critical Patsy points.

Two recruits were listed at running back, including the sole ** recruit in the Hoya recruiting class.  The question: how many points to award?  Is one quality running back better than three unrated running backs?

Some Committee members thought there weren't enough backs to justify a lot of points.  "One point," a Committee member said with scotch in hand.  "The Hoyas need to have a load of backs, and this provides no depth.  I don't care if they're both starred recruits!"

Another said "Three stars.  All you need is one cornerstone back - ask Bucknell, who slid RB C.J. Williams in their recruiting class last year and leaped into contention.  If he's that back, this is an unqualified success!"

Finally, neither Committee member was happy with the compromise result - 2 points out of 5.  This leads the Committee to firmly believe that this is the correct decision.  "A good compromise leaves everybody mad," is the framed saying hung over the Committee's entrance hallway. 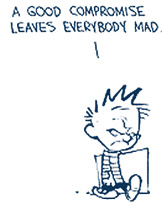 Words to live by

WR = 2 (of 4).    Five athletes on the Hoya recruiting list are there as WRs  One fogged a mirror.  Unlike the numbers at RB, the extraordinary number of athletes at this position allowed for the second point to be awarded.  Georgetown fans hope the recruiting services were wrong to list only one of the recruits.

DB = 2 (of 3).   In the numbers department, five athletes show up on the Hoya list at DB.  One was the speedster mentioned in the "speed" department, which at least hints at good quality recruited here.  But try as the Committee may, they couldn't justify giving the last "needs" point without at least one starred recruit.

It's unclear whether the Committee members simply wanted to adjourn for another year, or whether a sincere, detailed analysis of the numbers was conducted, but in a rare show of unanimity, the Committee voted that the Georgetown Patsy Point rating was exactly, perfectly, reflective of the relative worth of the recruiting class.  The fact that all the Committee members were dressed in their graduation caps and gowns, and in some cases with beers or Cognac in hand, was noted, but didn't affect the final decision.

A cursory look at the ratings, though, does seem to justify the Committee's decision, however it was reached.  Most of the points come from the giant size of the class.  There's no compelling reason to add missed, or overrated, quality points.