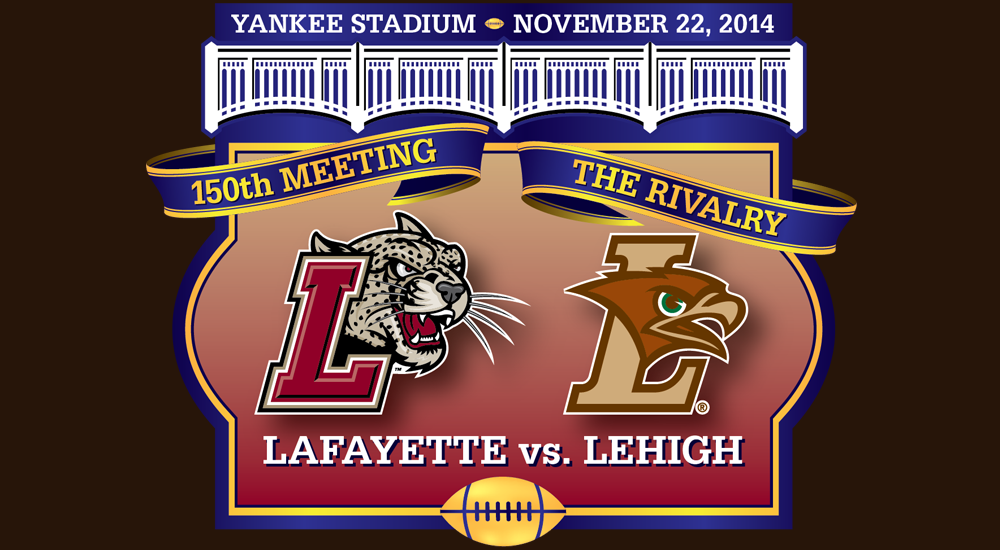 It may seem hard to believe now, but there was a time when people thought that taking the Rivalry outside the state of Pennsylvania was a horrible idea.

A few days ago, Lafayette announced that they had sold out their alumni and faculty ticket allotment for the much-anticipated game at Yankee Stadium on November 22nd, 2014.

Lehigh, who has more alumni, sold out their similar allotment on November 25th, 2013, meaning that this edition of The Rivalry will break attendance records.

The game which some people thought might not sell 16,000 tickets will, in the most conservative estimates, will easily top 40,000 ticket sales, with the prospect of the Yankees opening up more seats later in the season.


"The Rivalry" is a Lehigh Valley institution, and it was hard for some to picture it being held outside the Lehigh Valley, even if it meant the potential of a bigger crowd, a national TV audience, and entire days filled with activities in a new geographic location.

That's despite the fact that Lehigh and Lafayette have played in a neutral site before.

In 1891, Lehigh and Lafayette students, players, and supporters hopped on a Central Railroad of New Jersey train to play an exhibition game in Wilkes-Barre, PA, the terminus of that leg of the CRRNJ train system.

"The football management deserves much praise for what it has done this year," the Lafayette student paper said in regards to the third game in 1891, where they called it an exhibition game.  "The management has been under much heavier expense this year than usual... the trainer had to be paid, many of the scrubs had suits furnished to them, without which they would not have had the necessary training.  This third game with Lehigh will help to make up the additional expense of the year, besides giving the students a chance to see a game between Lafayette and Lehigh on neutral ground, a thing often wished for by many."

The CRRNJ provided a train for the Lafayette students and friends to head up to Wilkes-Barre, "furnishing special rates of $2.25 for those who wished to witness the game," the Lafayette reported, while noting that the Lehigh contingent took the Lehigh Valley Road instead.

A crowd of over 5,000 fans, "... by far the largest crowd that ever witnessed a football game in Wilkes-Barre," attended the matchup, with "half a dozen big 'busses holding crowds and a large number of private carriages, containing many of Wilkes-Barre's fair ones," the Lafayette said.  Most of the crowd cheered on Lafayette, with the boys of nearby Wyoming Seminary showing up as a unit to cheer for Lafayette.  "The cheering of the students seemed to startle the natives," according to the Lafayette.

Lehigh would win the game against heavily injured Lafayette 16-2 in an "inter-collegiate championship game," according to the Pittsburg Dispatch, and was "scientifically played on a poor field," the field in this case being muddy West Side Park.  Lafayette's only points would come early, when Lehigh was tackled for a safety, before the Brown and White scored three straight touchdowns to come away with the win.

(Oddly enough, it would be a year after this game that Mansfield and Wyoming Seminary would play what was considered the first-ever night football game at the Great Mansfield fairgrounds, powered by light bulbs and electricity provided by none other than Thomas Edison and General Electric.)

Electricity and lighting will not be a concern for the 150th meeting between Lehigh and Lafayette, played in state-of-the-art Yankee Stadium, and while you won't be able to take a train from the CRRNJ to the game this time around, it is possible to take public transportation to the game from Princeton, NJ, taking NJ Transit to Penn Station, then taking the subway or catching a Metro North train to E 153rd Street and Yankee Stadium.

Attendance won't be a concern, either.

"When the venue for the 150th game was announced last year, Lehigh athletic director Joe Sterrett and Lafayette Athletic Director Bruce McCutcheon thought sales would be capped at about 36,000," the Morning Call reported back in November. "That would fill the lower bowl of Yankee Stadium, which can accommodate more than 50,000 for football."

After the latest announcements of alumni tickets being sold out, it's increasingly looking like the total attendance will approach, if not exceed, 50,000 fans.

"We thought if we played in the right place it could be a very special event," Sterrett said. "It looks like that speculation on our part might be right."

It's worth mentioning that the last college football game played in Yankee Stadium, the 2013 Pinstripe Bowl between Rutgers and Notre Dame, had an official announced attendance of 47,122.

There's a real possibility that the 150th meeting between Lehigh and Lafayette may exceed that number.

What may be helping is that the 150th is going to be more than just a game - it's going to be an extended party, starting on Thursday and extending all the way to Sunday.

Already, according to Steve Lomangino from Lehigh Sports Information, there's a lot of activities scehduled.

While the full slate of Lehigh activites can be found at this link, with more activities to come, one of the cooler events is at the Marriott Marquis in Times Square, with a welcome center and "Tell Your Lehigh Story" station where you can talk about your Lehigh experience as an oral history which will be preserved for future generations.

On Friday there are a lot of special tours with Lehigh professors already set up, including one at the Intrepid Air and Space museum and a tour of the U.N., with a special Lehigh choral concert at Carnegie Hall at 7PM on Friday night.

One of my biggest questions about the 150th was: how on Earth will Yankee Stadium handle the tailgating experience?  At Goodman or at Fisher, one of the biggest draws of the game itself was the sprawling number of alumni of both schools that tailgate around both stadiums, and Yankee Stadium wouldn't be able to really accomodate that.

Instead, Yankee Stadium will be open two and a half hours prior to gametime, where fans can tour the Yankee Museum, Monument Park, and the stadium.  Fans will be able to watch the players warm up on the large Yankee video screen.

There also, according to Lomangino, may be some pregame festivities planned inside the stadium prior to kickoff, which may be tailgate-like, though nothing specific on that scale has been announced yet.

Everything is adding up to a great four-day stretch in New York City that is exceeding expectations, will be exposing the Rivalry to a brand-new group of people, and could be bigger, attendance-wise, than a bowl game pitting the largest university in the area vs. one of the most well-known college football teams in the nation.

Excitement for a Rivalry game in November.  And it's only January.