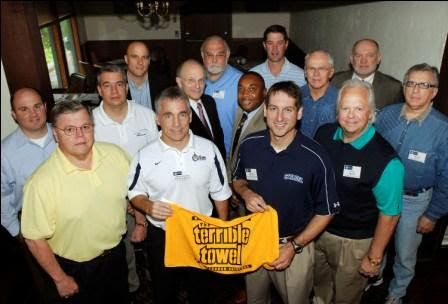 I don't think it's too much of a reach to say that pretty much everyone involved with the Lehigh football program now wants to add something else to their Christmas wish list from Santa - a new offensive coordinator.

Consequently, Valparaiso, a non-scholarship Division I football program the competes in the Pioneer Football League, seems to pretty much have gotten the early Christmas present they were looking for.

This morning, Dave Cecchini was announced as the new head coach of the Valpo Crusaders, making people who know Dave happy, because he's clearly been in line for a head coaching position for many years, and sad, because they know he's going to be a particularly big void to fill in terms of Andy Coen's offense.

Cecchini is, through and through, a member of the Lehigh family.

As a wideout, Dave graduated from South Mountain in 1993, ending his playing career by setting Patriot League records in receptions (88), receiving yards (1,318) and TDs (15), and leading the nation in receptions and yards.

And fittingly, all three of his receiving records would be broken in the last three years by two of the wideouts he coached as offensive coordinator for the Mountain Hawks, WR Ryan Spadola (TDs and yards), and WR Lee Kurfis (receptions).

Cecchini's long coaching career involved a quick jump to the big leagues as a coordinator and assistant.

Shortly after Dave's playing career at Lehigh ended, he joined Hank Small's coaching staff at Lehigh - proving that he indeed had inherited the coaching gene of his father Tom Cecchini, who coached at Xavier (before they discontinued their football program), Michigan, Iowa and the NFL's Minnesota Vikings.

After Cecchini joined Lehigh as a graduate assistant, a fiery offensive line coach was hired by Lehigh in 1995, a guy called Andy Coen.

This started a friendship and a offensive partnership between these two men, first under coach Small, then under head coach Kevin Higgins, that would vault the Mountain Hawks onto the national stage offensively.

"I am very happy for Dave and his family to have this opportunity," Coen said. "Dave is an outstanding coach but more importantly an outstanding person.  I have no doubt that Dave is ready for the challenge of becoming a head coach, as I know this has been a goal of his for some time. I wish Dave all the best as he begins his career as a head coach, and I look forward to watching him build Valparaiso into a winner."

Long ago, Coen told me how much he enjoyed working with Dave the first time around, and I'm sure he'll say the same about this four year stretch, where at times they seemed like they knew each other so well, and worked with each other so comfortably, you wondered if they were related.

Though Cecchini would eventually head to Harvard and Coen to Penn, everywhere Cecchini would go he would create offense, whether it was coaching QB Ryan Fitzpatrick up at Harvard or WR Andre Roberts down at the Citadel.

"I really enjoyed Coach Cecchini not only as a coach but as a man," Fitzpatrick said of Cecchini's hire at Valpo.  "He helped me a lot in my college years. He helped me grow up, he taught me a lot about the game of football, and really taught me a lot about being a great husband and father. He had a lot of characteristics that I really looked up to, and I think he’s going to make a great head coach."

Andy, of course, won the job,with Cecchini being rapidly scooped up by Higgins, now the head coach at The Citadel where he'd coach WR Andre Roberts and set up his eventual career in the NFL.

When Cecchini became available after The Citadel wanted to go in a new direction, he was hired back at Lehigh immediately as offensive coordinator.

"It’s a special feeling to be back at Lehigh,” Cecchini said upon his return to the Lehigh coaching staff.  “Anytime you have a chance to come back to your alma mater and a place you love is special.  I’m excited to be back and can’t wait to get to work.”

“First and foremost, the reason I returned here is Andy Coen.  Andy is a very good friend and a great coach and I’m looking forward to working with him.  I hope to bring the knowledge that I’ve gained from my time at The Citadel and Harvard and bring a part of what I’ve learned to help augment the offense here at Lehigh.”

From the get-go the fans were excited to have him back - me included.

"There's no doubt that there is a chance to reform the winning group that had Lehigh's offense atop the Patriot League charts," I wrote at the time, "and had the Mountain Hawks winning games in the playoffs.  It's an opportunity that may never come this way again - and one that athletic director Joe Sterrett had to take, no doubt."

It ended up being a four-year stretch, but it easily could have been a two year stretch..

A couple of years ago, the committee of folks who were picking Yale's head football coach had Dave Cecchini and Tony Reno as finalists for the job.

One site famously reported that Dave Cecchini was the new head coach at Yale, only to recant an hour later and say Mr. Reno had the job instead.

Lehigh fans were ecstatic they chose the other guy.

It goes without saying that Lehigh fans are happy, and grateful, that everyone did take the chance, as we were able to enjoy every aspect of that magic once again for the last four years - the prolific offenses that aided in the capturing of several Patriot League championships, wins over Lafayette, and playoff victories.


the most rewarding years of my coaching career," Cecchini said. "I am proud of all that we have been able to accomplish during that time, and remain extremely excited about the bright future of Lehigh football.  Lehigh is a special place, and the decision to leave was a difficult one.  I will miss the coaches, players, and administrators a great deal.  That being said, I am eager to face new challenges as the head coach at Valparaiso University.  Andy Coen has set a great example of how to run a successful Division I FCS football program, and I look forward to doing the same at Valparaiso."

It's stuff like this that makes me sad that he's leaving, but happy, too.  He accomplished an awful lot in the last four years, and selfishly, as a Lehigh fan, I'd always want a little more.

And yet, he deserves this chance to be the head man.

In taking a head coaching job in the Midwest, Dave returns to his roots in that part of the country.

"We made up a list of all the attributes that would be important for our next head coach, and Dave met every one of them," Valparaiso athletic director Mark LaBarbera said.   "Everyone we've talked to about Dave indicated that he was not only an outstanding football coach, but an outstanding leader of young men." .

Congratulations, Dave, on joining the club of head football coaches.