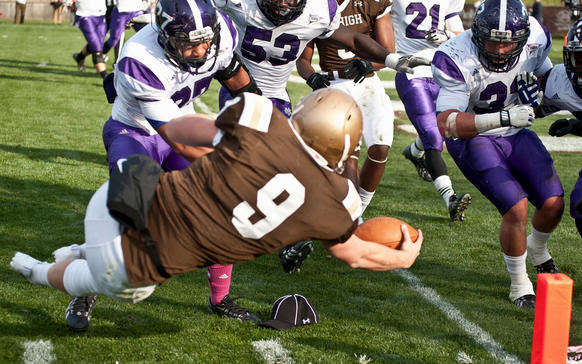 There's no doubt about the fact that it was a terrific day for Lehigh football on Saturday.

For the only the second time this year, the Mountain Hawks never trailed, and the many questions that surrounded the team after the loss to Bucknell were, in large part, answered.

But I also heard something interesting, too, in several conversations with fans.

It's the idea that Lehigh's "losing" to Bucknell was the perfect thing to happen to this team at this time.

"Losing" for a football team can be good in several different senses.

It puts winning in perspective.  Sometimes, when wins come too easy, you come to expect that good things are going to happen, simply because that's the way things always happen.

I think, though, that every time a team wins like this, it can seem like they come too easy.  Wins seem to feel less precious.  Though people don't realize it, they take it for granted that somehow, some way, things will be pulled out, because that's what always happens.

That game broke one of the most remarkable regular-season winning streaks you'll ever see: the Mountain Hawks won a remarkable 26 regular-season games in a row, many of which came with a certain guy called Andy Coen as the offensive coordinator.

It was a streak that started a week after Lehigh lost a tough November game in Hamilton., 28-24, in 1999, and wasn't stopped until that evening.

My future wife and I were in the stands, and we saw RB Eric Rath block a punt and return it for a touchdown, but it wasn't enough on that night.

As I left, though, I was talking to two other Lehigh fans, who said the following:

"I know it sounds crazy, but I think it was really good that the streak is over and they lost now.  This gives them the best chance to come back and win the Patriot League and go back to the playoffs."

I remember those words like it was yesterday, even though I'm sure I nodded politely, not really believing what he just said.

But I remember those words now in the context of the last two seasons.

It has been almost a year since Colgate traveled to Murray Goodman last season and delivered Lehigh its first loss of the season, a 35-24 loss that came at the exact wrong time for the Mountain Hawks.

Here's the interesting part, though: What if the Mountain Hawks had lost that previous week to Holy Cross, and instead headed into the Colgate game off of a loss to Tom Gilmore's Crusaders?

If you'll recall that game in Worcester, the Crusaders lined up for a game-winning field goal attempt, but the kick was off the mark and went wide right, preserving Lehigh's amazing ninth consecutive win, 36-35.

It's easy to see a scenario where the Mountain Hawks came home, and saw that they still had an opportunity to win the league title, but the only way they'd be able to do so is to beat Colgate at home.

Would they have won against Colgate at Murray Goodman?

Certainly, winning would have seemed a bit more precious to this team had that happened.  They would have gotten a scare: suddenly, all the goals of their season, the conference championships and the FCS playoffs, would have been in jeopardy.

You imagine that the recent experience of losing would have brought a sense of urgency to the team, refocusing them about their goals.

Now, none of that would have probably changed the play of RB Jordan McCord and QB Gavin McCarney, not to mention Colgate's tremendous offensive line, built to punish opposing defenses.

But there's every reason to believe that maybe, just maybe, "losing" might have given Lehigh that extra bit of focus, that little tiny extra bit of urgency, to maybe keep an offensive drive alive, or make a big 3rd down stop, or make a field goal into a touchdown, that might have swung the game.

It was a focus and determination that seemed present in Lehigh in the 148th meeting of "The Rivalry", where Lehigh won 38-21 in an effort to try to qualify for the FCS playoffs at 10-1.

While the win was great and it capped off an outstanding season, as you already know, 10-1 was not deemed enough by the folks who selected the playoff field last year.

And it's hard to escape the irony that had Lehigh lost to Holy Cross and beat Colgate, they would have had the same record they did last season, 10-1, yet been conference co-champs and represented the league in the FCS playoffs.

Think about that a second.  "Losing" a week earlier last season could have had Lehigh winning the Patriot League, and headed to the playoffs.  All of Lehigh's goals would have been achieved.

The lesson of "losing" might have happened too late - and had it happened just one week earlier, Lehigh might have achieved all their goals and been in the playoffs.

This isn't by any stretch a condemnation of a particular team, leader or anything.  I think it's actually human nature to feel this way, which is why reaching 10 wins in football season is an exceptional achievement.

Going back to the Bucknell game, I too, expected Lehigh to win the game.

I expected the Mountain Hawks to roll, to get 35 points on offense, because it's what had always happened.

I could have made the trip to Lewisburg, anticipating a tough game.  But the fact is I didn't.

I wanted to spend the time with my family - they miss me a lot during football season - and I figured it was a good opportunity to watch the game on the Patriot League Network online.  That's about as much of me thinking that the game was a guaranteed win that you'll see from me.

I don't know if the entire team felt this way travelling to Lewisburg.

But I do know that they don't feel this way this week.

You see, that's what "losing" that game to Bucknell has done.

It appears given this Lehigh team a lesson - a lesson that, it appears, can really help a good team become great.

"Losing" offers some perspective on winning, and what it takes to win.

You could see it this Saturday, how this squad seemed in a different mindset than they were two weeks prior.

They came out knowing that they had to win this game, and it showed, with senior FS Tyler Ward coming right out and forcing a turnover, and junior QB Matt McHale marching right down the field to get a touchdown.  There wasn't any swagger.  It was just making sure that "losing" was not an option on this day.

Senior RB Keith "Tank" Sherman wasn't about to let his season end last week.  He learned the lesson about "losing".  He came out with a career day that he'll never forget, the 60 yard touchdown run, 160 yards rushing, 3 overall TD.

It seems like, to this team, it's no longer an abstract concept, "losing".  The memory of "losing" - and not just "losing", getting defeated by more than five touchdowns to Bucknell - is fresh on everyone's minds.  They don't want to have that experience again.

And again, it's not a condemnation of this team, or any of the players or coaches - it's human nature.

If you have three square meals a day and are within walking distance of McDonald's, you forget what it's like to be hungry, to not know the next time you're going to eat.

"Losing" can make a team hungry for wins.

In my preview of the Holy Cross game, I said if Lehigh team that wins this game, the Mountain Hawks will become a very dangerous team the rest of the way.

That's because of "losing".

And the hungry Mountain Hawks are hoping that the rest of the Patriot League, and the teams in the FCS playoffs, will be very, very unhappy that Bucknell beat Lehigh two weeks ago.