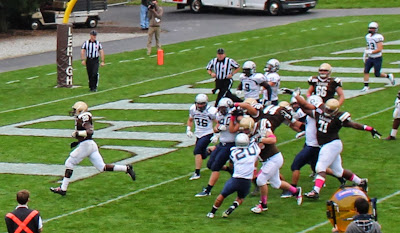 The term being bandied about the season in regards to the 2013 Mountain Hawks was the "Cardiac Kids".

Every week, the Mountain Hawks would fall behind.  Every week, there would be hiccups, issues, and heart-stopping moments, but most often would end up in Lehigh victories.

This Saturday, the Mountain Hawks answered.

Lehigh scored the most points they'd scored in the first half since 2002, scoring on seven of their eight drives of the first half and narrowly missing the eighth.  They'd cruise to a 38-3 halftime lead before the second stringers would make the final score look a lot closer.

In short, it was exactly what most of the 9,866 fans in attendance were looking for in the first Patriot League conference game of the season.  Never trailing.  Making the game's outcome not be in doubt early.  Winning.


"I'm very pleased with today's performance," head coach Andy Coen said. "We've been talking for a while about playing a more complete football game and we finally saw that today, particularly in the first half."

It was difficult to imagine a more perfect opening drive, after freshman DB/RS Brandon Leaks took the opening kickoff 37 yards, senior QB Brandon Bialkowski found junior WR Josh Parris for a first down, and senior RB Keith "Tank" Sherman would rip off a 50 yard run down the sideline to set up shop at the Georgetown 3.

Not for the first time today, senior RB Sean "The Finisher" Farrell would take the ball in from the 3 yard line and give Lehigh a lead they would never relinquish.

The Hoyas started their backup QB Kyle Nolan in his first action after being unavailable last week due to injury, and early on it showed, getting stuffed on Georgetown's first two offensive drives of the game.  Sophomore LB Noah Robb came up with a particularly big stop, forcing Nolan out of bounds short of the first down marker, forcing a punt.

Bialkowski would then find senior WR Lee Kurfis on a third-down conversion before going to the Tank once again, speeding to a 28 yard run again before getting the rock two more times to put the ball in the end zone and to also put Lehigh up 14-0.

"That kind of picks everybody up," Coen said, "and it deflates the opponent a little bit as well.  That early success allowed us to be successful all day running the football."

Another quick Georgetown series - this one ended by a sack from junior DE Arturo Gyles - Lehigh's offense would once again not be stopped.

After Parris returned the punt to the Georgetown 32, Tank took over with a big screen pass from Bialkowski, getting it again inside the 10 before The Finisher finished another drive with a touchdown.

If Keith Sherman was the equivalent of RB Robert Smith of Minnesota Vikings lore, Sean Farrell was the RB Leroy Hoard, the guy at the goal line scoring the touchdowns.

Not to say Sherman didn't have an amazing day.

He'd finish the first quarter with 112 yards rushing and 24 yards receiving as well as the touchdown, and end his day with a career-high 157 yard rushing day, totaling 181 all-purpose yards and 2 TDs.

“The offensive line played very well today,” he said after the game. “Senior FB Zach Hayden made some real good blocks.  We went out there and executed. The coaches put together a great game plan. All week, we preached if we get the run game going, we’d have a great day.  That happened today.”

Everything seemed to come up Lehigh the rest of the first half.

After surrendering a field goal to Hoya PK Matt MacZura, Lehigh's offense wouldn't be stopped, first converting a drive with Farrell's third rushing touchdown of the half and then ending a second drive with a 41 yard field goal by freshman PK Ryan Pandy, a career long, to put Lehigh up 31-10.

The next Hoya drive senior LB Nigel Muhammad would push a Hoya receiver out of bounds to stop the clock late in the first half, Parris would find a seam in the punt defense and rip off a 35 yard return, setting up a short field for yet another score before the end of the half.

Junior TE Tyler Coyle would convert a big 3rd-and-2 with a big 18 yard grab, and junior WR Derek Gaul would haul in his first collegiate touchdown pass to help make this a runaway, 38-3.

"I think we played a great first half," senior FS Tyler Ward said afterwards, his beard dyed pink in honor of breast cancer awareness month.  "Only giving up three points was awesome, and that little goal-line stand we did [holding the Hoyas to a field goal] was great."

Sherman would add his second touchdown on the afternoon after a burst off left tackle in the 3rd quarter, and would surrender three touchdowns to Hoya RB Nick Campanella to narrow the score against Lehigh's second team.

Lehigh's 5 rushing touchdowns in a game was the first time the Mountain Hawks had achieved that feat since 2005, when they did it against Harvard.

"One of our goals each week is to establish the run game and the line of scrimmage," Coen said. "I think we always put together a really good plan. We've been behind in so many games this season that we had to throw it around a little bit more. Today I thought we were really balanced.

"From a coach's perspective, this was exactly what we were looking for, and it happened at the right time as we start league play. Now we just have to keep trying to do the same thing each week."