Congress Shuts Down Government, And Army and Navy Athletics, Too 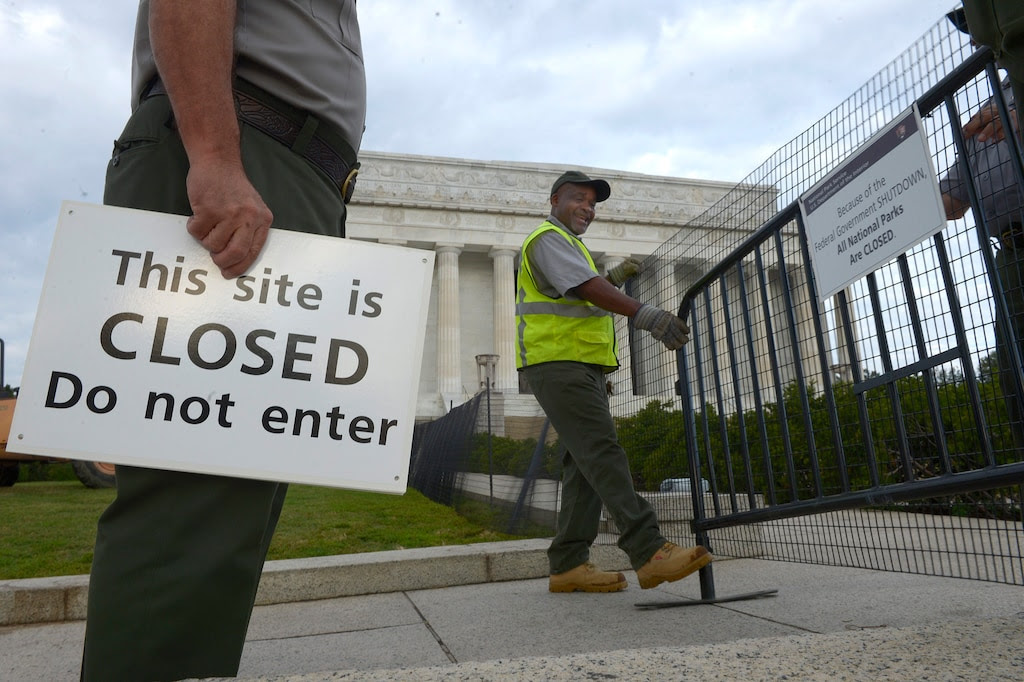 When college football fans think of the word "shutdown", the word "corner" generally follows, followed by a debate on whether their particular members of the secondary could be considered "shutdown corners".

Today, though, the word "shutdown" had a different meaning - a federal government shutdown, and one that ended up involving the two service academies of the Patriot League, Army and Navy.

As the food fight raged between the House's attempt to defund, delay, or dissect Obamacare and the Senate's efforts to roll back these attempts, midnight passed on the Congressional deadline to fund the federal government, thus causing "non-essential" government workers to be furloughed.

Though some might consider the athletic directors of the U.S. Military Academy (Boo Corrigan) and the U.S. Naval Academy (Chet Gladchuk) and their athletic department staffs "non-essential", the decision of the Pentagon to furlough these people have a deep effect on a whole lot of athletic contests - and their opponents.


Most college football fans heard that the actions of Ted Cruz and Harry Reid would be affecting their world when it was announced that the Navy/Air Force game, one leg of the highly-coveted "Commander-In-Chief's Trophy" was "in jeopardy" of not happening because of the furloughs.

Army, Navy and Air Force might be forced to skip their football games next weekend because of the budget impasse in Congress.

The Defense Department temporarily suspended sports competition at the service academies Tuesday as a result of the partial government shutdown.

A Pentagon spokesman, Army Col. Steve Warren, said the decision was being reviewed by lawyers to determine whether the funds used for such activities are congressionally appropriated.

“It's not a decision being made on the academy grounds or within the athletic department,” Navy AD Chet Gladchuk told the Baltimore Sun. “It's all being driven by the Pentagon… We're going to delay any decision on our end on Air Force until Thursday at noon.”

There's plenty of evidence that the furloughs have taken people by surprise, especially considering the fact that Navy had already published their game notes for this weekend's contest mere hours before the furloughs were to happen.

To put the magnitude of delaying or postponing this particular game in perspective, the "Commander In Chief's Trophy" games, most notably Army/Navy, are by far the most popular games on the service academy schedules.  Memorial Stadium in Annapolis had already sold out the 40,000 seat stadium easily.  Befitting its importance, it was (is?) scheduled to be broadcast nationally on CBS.

“At this stage we’re taking it basically a half a day at a time, holding our breath that they can bring [the shutdown] to resolution,” Gladchuk told the Washington Post. “The game on Saturday, I mean it’s a huge issue. The stage is set for one of the most significant event statements we’ve had in a long time, so the timing couldn’t be worse.”

Army, Navy and Air Force actually competed in football games during the last government shutdown in 1995.  Army hosted Bucknell, Navy hosted Tulane, and Air Force hosted a giant game against Notre Dame, a game that only happened thanks to representatives from the WAC, Notre Dame, and Colorado State all chipping in to provide all the services on that day.

But the issues of staging such a big game in Annapolis this time around is different.  One big reason from that involves the opponent, Air Force.

Air Force, like Navy, is a service academy.  Like Navy, its athletics department is affected by the shutdown.
But a part of of the parameters of the shutdown is that the travel budget for the sports teams has been stopped as well, with the idea that the travel budgets for Air Force (and Army, who is supposed to travel to Boston College this weekend) are appropriated funds from the federal government.

No travel budget, no football.

But is the travel budget an "appropriated fund"?


Defense Department spokesman Bill Urban said lawyers are trying to determine whether non-appropriated funds might be used by the Air Force team to travel to Navy and the Army team to travel to Boston College for Saturday's scheduled games.

"There are differences in how each academy funds their athletics programs," Urban told Mark Schlabach of ESPN.com. "One academy can pay for its entire program through non-appropriated funds. Others do not have that setup."

As a part of the Mountain West's TV contract, the Air Force gets "non-appropriated funds" through a payment for TV rights.  This is not the case with Army and Navy, in the Patriot League for most sports and competing as an independent in FBS.

This was basically confirmed in the Colorado Springs Gazette:


An effort is under way to use non-government funds to save Saturday's Air Force-Navy football game, which is officially off at this point because of the government shutdown.

The deadline, at 12 noon on Thursday, was set to that date and time because that was the last possible time that the Air Force could physically charter a plane to get everybody to Annapolis.

There's even some debate as to whether "appropriated funds" are used to fund athletics at Navy.

“There would be no cost to the government, there are zero appropriated funds in terms of conducting this contest at the Naval Academy,” Gladchuk told the Sun. “It has no affect on the budget of the government one way or the other. What it does is that it eliminates the opportunity for the academy to generate critical revenue to support 33 varsity sports.”

If no agreement is reached on funding a functioning federal government by the deadline, the game theoretically could be rescheduled for the week before Army/Navy.

But it would be a logistical nightmare to reschedule the game for that time, reimbursing tickets, ensuring that the game will be televised nationally in the beginning of men's basketball season and FBS conference championship season.  (And assuming, of course, the furlough is over at that point, too.)

Gladchuk said the lost economic impact to the area could be in the millions of dollars.

“When you look at the ticket revenue that would be returned, if you take a look at the corporate sponsorships, the hotel accommodations, the catering concessions, the parking, the restaurants in downtown Annapolis, all of our major donors were coming in, it's reunion weekend for the 1963 Cotton Bowl team and 300 reunion groups, it's clearly one of the most significant Saturdays that we could possibly orchestrate at the academy,” he said.

There's a lot more costs to the Army and Navy athletic departments, too, if the furlough lasts for weeks or more.

Fall Patriot League sports - men's and women's soccer, cross country, swimming and diving, women's field hockey, and other sports - are in the middle of their conference schedules and meets.

All those contests involving Army or Navy will have to be rescheduled or cancelled, causing days of being on the phone, making decisions to delay or reschedule, affecting hundreds of support staff, to make sure fields and courts are ready, programs printed, medical staff available, and plenty of other things that make intercollegiate competition possible.

The shutdown already has impacted other Navy sports. According to Gladchuk, three coaches (swimming, gymnastics and women's cross country) have been furloughed because they are government employees, but that the teams would continue to practice under the supervision of assistants who are nongovernment employees.

This is aside from the fact of the unfairness to the student-athletes with limited eligibility being denied a chance to compete.  Women playing field hockey for Army aren't doing so to secure a million-dollar contract to play the sport after their time at the Academy - they're doing it to compete.  Taking that away because of a political fight in Washington that doesn't involve them seems completely unfair.

Athletic departments around the Patriot League, and at Army and Navy, are clearly taking a wait-and-see attitude in regards to the furloughs, hoping for the best (it being solved tomorrow) but preparing for the worst (weeks, or months, of shutdown).

But it's very clear that an extended government shutdown would have profound effects on not only the service academies and the student-athletes, but also the local economy around the Academies.

Some folks say that regular people won't feel the effects of a government shutdown.  That most certainly isn't the case around West Point and Annapolis.