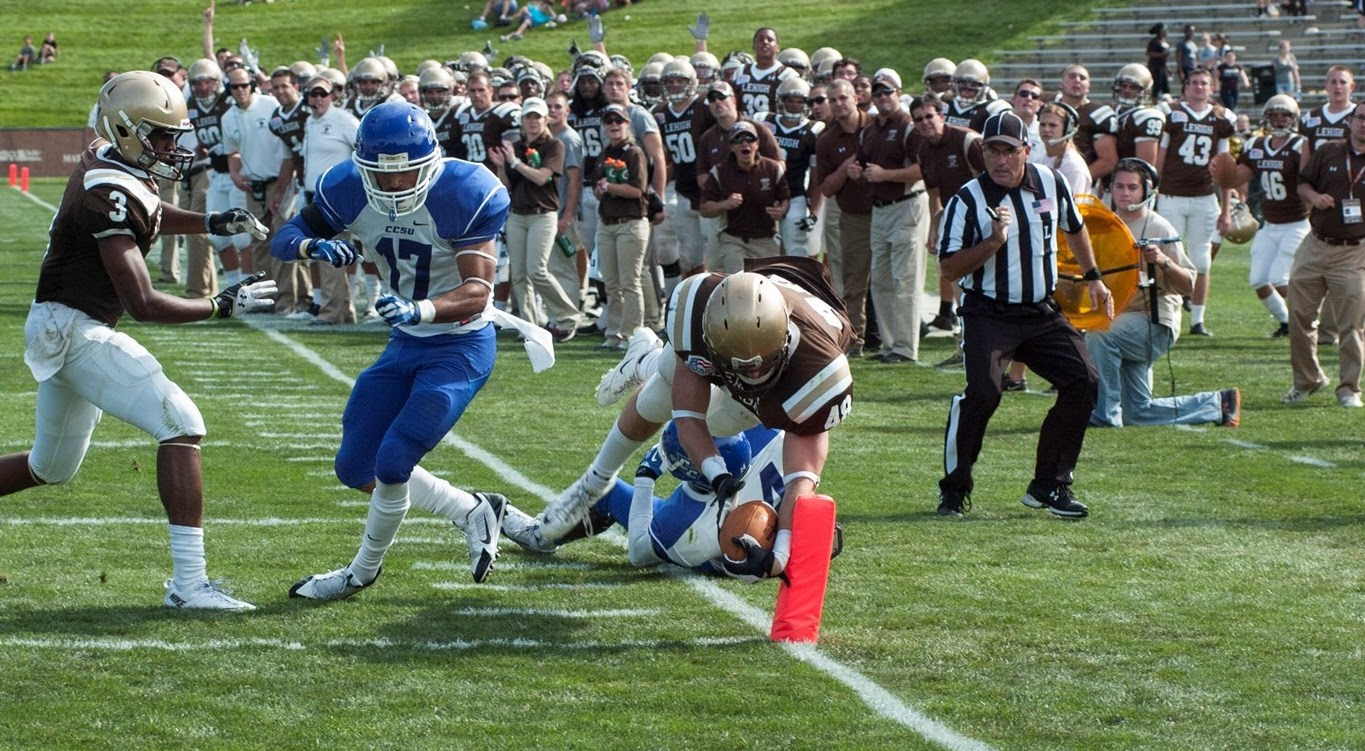 It looked pretty grim - so grim, in fact, that many of the announced attendance of 6,386 had already left the stadium by th beginning of the 4th quarter.

Central Connecticut State, behind a monster offensive performance by RB Rob Holloman, was methodically beating up the Lehigh defense.

There the Blue Devils were, driving to start the 4th quarter, a Lehigh facemask penalty keeping their drive alive, and finally reaching 1st and goal at the Lehigh 9.

It was the end of that drive, unbeknownst to all, that would be the difference between winning and losing their home opener.

The old adage that came up a lot during the post game press conference involved the fact that the biggest improvement for a football team comes between Week 1 and Week 2 of the regular season.

Early on, Central Connecticut State looked like a team that had a game under its belt.

On the Blue Devils' opening drive, Holloman ripped a 44 yard gain to set up a 1 yard touchdown run, and from that moment the Mountain Hawks were playing catch-up.

Senior QB Brandon Bialkowski, senior RB Keith Sherman and senior WR Lee Kurfis featured heavily in the Lehigh's opening drive, a 20-play, 75 yard drive that would end stalling a the CCSU 3 yard line.  Freshman PK Ryan Pandy would score his first-ever points in a Division I game to cut the deficit to 7-3.

After a brisk 1st quarter, Holloman featured in the Blue Devils' next touchdown, but in a different way: after taking the ball on an inside draw and flea-flickering it back to QB Nick SanGiacomo, the Tulane transfer would get drilled as he delivered a perfect pass to a wide open WR Scott Benzing to make the score 14-3.

Lehigh responded with a response drive that involved a steady diet of Keith Sherman runs, followed by some precisely-thrown balls to senior WR Sergio Fernandez-Soto, and ultimately a 1 yard plunge through the line to make it 14-10.

But the Blue Devils would bull their way to an impressive 20 play drive of their own, chewing up the last 4:42 of the half with RB Darius Lee getting the ball instead of Holloman.

Under a minute to play at the 2 yard line, SanGiacomo threw a perfect pass to WR Denzel Jones in a place only he could catch it, and with a beautiful, athletic play he came down with the ball and landed in bounds.

After Bialkowski would connect on a big 57 yard pass play to junior WR Josh Parris for his first varsity touchdown pass, two costly turnovers would be converted into points for the Blue Devils.

The first interception was a forced ball by Bialkowski, nabbed by CB Jevon Elmore and returned deep into Lehigh territory.

The second was a Bialkowski shovel pass that careened off of DE Josh Alaeze and into the outstretched arms of DE Elijah Yopp.

Both were quickly converted into touchdowns by Holloman, accelerating with blazing speed through larger and larger holes.

Though CCSU's kicker would have one of his extra points blocked by senior NG Rickey Layton, the Blue Devils would double up Lehigh 34-17.

Holloman would have an incredible day with 253 all-purpose yards in runs, receptions and returns, scoring 3 of the Blue Devil touchdowns.

"What a great guy, what a fine young man," CCSU head coach Jeff McInerney said after the game.  "Just a tremendous athlete who can catch the football, run in between the tackles for a tiny guy, he's got very good hands, good route runner.  Good young man.  Glad he's on our team."

It was here when Lehigh was on the ropes, 1st and goal at the 9, at the start of the 4th quarter.  Many fans had left.  CCSU was about ready to go up 41-14, Holloman poised to punch the ball in the end zone one more time.

1st and goal.  Holloman to the end zone.  Stopped by junior DE Tim Newton at the 6.  A big solo stop.

2nd and goal.  Hollman makes his way to the end zone.  This time, sophomore DE Greg Palma brings down the speedy back at the 3.  Another big solo stop.

3rd and goal.  Holloman again goes for the goal.  But sophomore LB Noah Robb emerges and wraps him up in an incredibly huge play, making sure Holloman wouldn't break Lehigh's back.

CCSU would manage a 20 yard FG from PK Stephen Calitiri to make the score 37-17, but it was that stop that was the catalyst for Lehigh's amazing 20 point comeback.

It seemed like whenever Lehigh needed a big stop, it was Robb that delivered.

"We're a young group," Robb said.  "By the second half, everyone was much more comfortable with what we were doing.  We were down, and all the guys said, 'All right guys, we need to get a stop here.'  And everyone kind of just beared down and manned up."

Clinging to that slim chance at victory, it was time for the offense to click with three big plays that changed the course of the game.

First was a connection from Bialkowski to senior WR Lee Kurfis on the next drive, a 41 yard connection setting up a 9 yard Bialkowski pass to the outstretched arms of Keith Sherman.  CCSU 37. Lehigh 24.

"It's just the culture of this team," Kurfis said.  "No guy hangs their head for a minute.  When we came in as freshmen, that's how the seniors did it, and now that's how we're doing it."

A 3-and-out, and then Bialkowski wasted no time in hitting Kurfis again, this time for a 62 yard touchdown reception.  CCSU 37, Lehigh 31, and, as Mcinerney said later in his press conference, "We started losing confidence, and they took advantage of it."

After a short drive ending in a CCSU punt, Bialkowski found - who else?  Kurfis again for an amazing 77 yard catch.

Senior FB Sean Farrell finshed off the drive with a 3 yard run to tie the game up and, amazingly, complete the comeback.

"Our up-tempo offense got them off guard," Brandon said, "We kept running plays harder, faster and faster.  They weren't even in their stances sometimes and we'd be running a play."

Lee would have an incredible day as the go-to Lehigh reciever:  7 catches, 222 yards, and those 2 touchdowns.

"The number one most important thing is how these kids hung in there together," head coach Andy Coen afterwards. "They never quit for one minute. We were down 20 then the offense makes a big play and the defense makes stops, on and on down the line. I'm incredibly proud of our guys for hanging in there. They never quit."

The "on and down the line" included stalling CCSU' final drive of regulation at the Lehigh 22, where Calitiri's 39 yard field goal attempt off the right hash sailed wide to the left.

"I called them up right before the overtime, and I said, 'Since you guys have been here, what do you guys do?'  They all, to a man, yelled 'Win!'."

And win they did.

After Holloman - who else? - would convert a big 3 and 6, SanGiacomo would thread a perfect needle to Holmes the put the pressure on Lehigh to score.

It would take all of one quick TD pass to Kurfis, and a Pandy extra point, to respond and send it to the second overtime.

Bialkowski would hit junior TE Tyler Coyle for a 8 yard gain before finding Farrell again for his second touchdown of the afternoon - where he'd leap up and make the ball cross the plane of the goal line for the winning score.

SanGiacomo would try to thread the needle one more time on 4th down and 9 in their side of overtime.

He round find Benzing over the middle in a slant with another zipped pass.

And so would junior LB Isaiah Campbell - who would work his hand in between Benzing's hands and the ball, and work it free, making the ball dribble incomplete.

The difference between winning and another overtime was Isaiah Campbell's hand.

"I'm very proud of these guys for getting this win today," Coen said.

"In the end, they made more plays," McInerney said.

"We were able to move the ball effectively in the fourth quarter.  Something just clicked," Bialkowski said.

"We knew on that fourth down, it was one play to win the game," Robb said.

"This is football," Kurfis said.  "Stuff happens out there.  It's really up to the players to just battle through it.  Things weren't going our way in the 1st quarter, 1st half.  But we just battled through, fixed our mistakes, and won the game."