Lehigh In the NFL Preseason: Your Weekend Guide

It may be 21 days until the start of Lehigh's football season, but there's plenty of football on TV for Lehigh fans to get excited about tonight.

For all the information you need on catching LB Billy Boyko, OG Will Rackley and WR Ryan Spadola this weekend, just check below the flip. 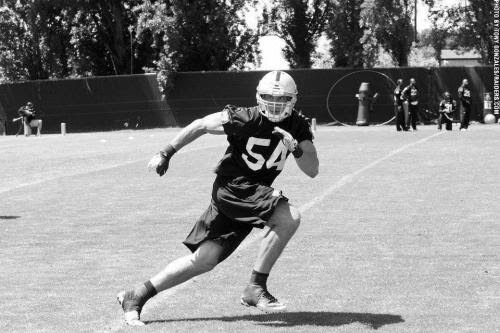 What: Oakland Raiders at the New Orleans Saints

What we'll learn: Boyko, who returned to Raider practice this week after an injury held him out of most of camp for the Oakland Raiders, will finally get his first taste of NFL action.  Currently listed as the fourth MLB on the Raiders' depth chart, the hope is he'll show up well on special teams, or make a big play or two in the second half, to make a good impression on the Raider coaching staff and hopefully make the 53-man roster.

Who: OL Will Rackley and WR Ryan Spadola

What: Jacksonville Jaguars at the New York Jets

What we'll learn: Rackley, who is penciled in as the Jaguars starter at guard, will probably play early in the game as protection for QB Blaine Gabbert, and might make way early in the second half for the backup, OL Jason Spitz.  Earlier this week, he and teammate C Brad Meester were the only two offensive linemen standing in practice - a change from 2012, when Will lost the entire season to injury.

Ryan has been one of the toasts of Jets' preseason thus far, getting the "Wayne Chrebet Underdog Award" from ESPN's Rich Cimini and getting lots of snaps with both the 1s and 2s in the Jets' first preseason game against the Lions.  Though he's still officially No. 4 on the depth chart, Ryan has taken full advantage of WR Santonio Holmes' absence and shown the world what he can do.  With the recent announcement that he would be featured on special teams, he looks like he'll have an outstanding shot to stick with the Jets.

NY Post: Lehigh Hopes for Spadola to Pick Up Slack for the Jets

There will be a Lehigh reunion of sorts Saturday night when the Jets play the Jaguars at MetLife Stadium. Perhaps before the game, and certainly after, Jacksonville offensive lineman Will Rackley and Jets free agent wide receiver Ryan Spadola will have a chance to chat and update each other on their respective training camps. The conversation should start with Spadola saying, “Thank you.”

It was Rackley, drafted in the third round in 2011, who provided Spadola with advice on how to make the transition from college to the NFL. It has helped Spadola go from an undrafted free agent to a virtual lock to make the Jets’ opening-game roster.

“He was the guy I reached out to throughout the whole NFL process from the Combine to getting ready for the draft and what to expect in training camp and how to prepare for it,” Spadola said.

Spadola’s emergence is much-needed with Santonio Holmes still sidelined after foot surgery in 2012. Clyde Gates missed yesterday’s practice with a head injury; second-year player Stephen Hill remains a work in progress, and nine-year vet Braylon Edwards may not have much left.

Whatever the reasons, the Jets are happy he spurned free-agent offers from the Colts, Dolphins, Bucs and Giants.

“I learned what the Jets were about and what they were trying to accomplish this year,” said Spadola, a native of Howell, N.J. “I looked forward to being a part of it.”

Spadola has worked with the first team offense at times during camp and is being featured on special teams.