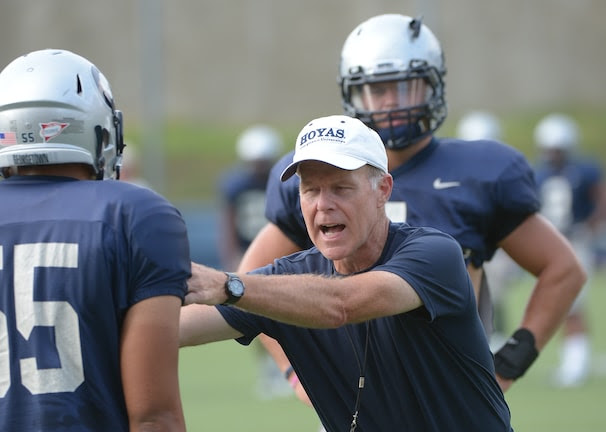 The term is "Hoya Paranoia", and back in the 1980s it meant the hoops legend of John Thompson, Patrick Ewing and the golden era of Hoya basketball.  There's even a blog dedicated to those teams in that time frame.

To Hoya football fans, though, the term Hoya Paranoia has meant something much different.

To them, head coach Kevin Kelly has been fighting a losing battle in the Patriot League, despite being one game away from the title in two of the last three years.  They say that the new reality that has football scholarships in the Patriot League is bad, bad news for the Hoyas, and that the inevitable decline of the program is right around the corner as a result.

In this reporter's opinion, in past seasons, the argument hasn't held water.  The past three seasons have seen the Hoyas come dastardly close to knocking off the Mountain Hawks, and they've beaten every

other team in the Patriot League at least once.

But this season - with the new realities of Patriot League football scholarships - are they right?

These Patsy Ratings certainly won't be the ultimate answer to the question - taking these "for entertainment purposes only" ratings and determining that would be folly.  (Take it from The Committee, who knows exactly how these things are calculated.)

But considering it's all we've got, below the flip, here is Georgetown's Patsy Rating for 2013.

Georgetown's recruiting class is announced the latest of all the Patriot League schools, thanks to their policy of waiting for the deposit check to clear before announcing the Hoya incoming class.  That's why most of the rest of the league announced their incoming classes back in February.  In any case, here we are, with the final installment of the Patsy ratings for 2013.

THE GOOD
If I were writing the release, I'd say something along the lines of the following.  "A wide-ranging class has attracted a bevy of different players from across the country, from California to Massachusetts.  In addition, several athletes from football hotbeds like Florida and Texas are a part of this year's incoming class."

Essentially, there are two ways to get high ratings: to have amazing quality/ratings numbers, and little focus so much on class size and depth (or, as the Committee calls it, "target practice"), or to have giant class size numbers and had some good quality wash up amongst its ranks (Committeespeak: "cast a wide net").

The Hoyas did not engage in "target practice" - perhaps the decision on football scholarships had something to do with that -and while they did "cast a wide net", the net was not as wide, nor did it wash up enough incredible quality athletes, to get a big Patsy rating.  In other words - uh, oh.

This is where the Committee inserts its usual disclaimer that a low Patsy point rating does not mean that a particular member of the class is bad, or the class will yield no all-League players, or even no superstars or future NFL players.  The Patsies are notoriously bad at predicting specifics -they are what they are. But the ratings are not saying nice things about the overall makeup of this class.

QUALITY = 7. Case in point, the ratings show only 7 of 23 recruits existed in the eyes of the recruiting services, or just 30% of the overall group.  But all of these were of the "fog a mirror" variety, meaning that they were listed by the scouting services but did not have star ratings.

Think about this a moment: Colgate's quality rating alone was a 32 - more than four times the Hoya's rating. Granted, Colgate's class this season was one for the ages, Patsy point-wise.  But it shows what Georgetown is dealing with here.

CLASS SIZE = 4.  23 Recruits, which in this new era of the Patriot League offering scholarships is a larger number than most schools.  While we're on the subject of Colgate, this Hoya Paranoia class is eight bodies bigger than Colgate's incoming class.  It's four more class size points than the Mean Red Machine, but it falls way short of the 25 point deficit with the Maroons in terms of quality points.

DISTRIBUTION = 8.  While this is indeed the maximum number awarded by the Patsy Points, and the Hoyas did indeed cover all their bases, what is odd is that they covered all the bases just barely.

With a 23 member class, usually distribution points cover all the bases with ease - which makes sense, since the more announced bodies, the more chances that a different position is called.

But only one defensive back shows up on the incoming class list, and only one running back. (Unhelpfully, one service lists this athlete as an inside linebacker as his listed position, but the Hoyas list him as a running back.)

I would have expected more bodies announced at both positions - and, in particular, defensive back, which will be more fully explained later.

SPEED = 3. With the general disclaimer that accurate information is hard to come by in this instance, two athletes did indeed provide speed information that provided some critical Patsy points.

TRIGGER = 0.  3 QBs, but none of them were rated.  One wasn't rated by any service, which is unusual.  As Patsy Point veterans (and Lafayette fans) will tell you, QBs are the gift that keeps on giving.  Had just one of these players been ranked, it could have had a dramatic point swing for the Hoyas.  But they were not, so they didn't.

Here, too, is one of the big benefits, in most years, of having a large class size.  In most years, with a class size of 25-30 kids, how many are trench guys?  6?  7?  More?  Of that number, how many are jumbo's?  Probably quite a few - and the more jumbo linemen you have, the more the Patsy points pile up.

That Kelly only nabbed two Jumbo lineman was a huge deficit in their "big net" strategy, at least Patsy point-wise.  Even a handful more "Jumbos" would have helped on many fronts.  (On an unrelated Patsy point note, none of the five linemen were recognized by the scouting services.)

NEEDS = 5 (of 12):
LB = 3 (of 5).  Is the Committee being unduly generous here?  Perhaps.  Though there is obvious need at inside linebacker with the graduation of a guy who's going to be in an NFL Camp this summer, LB Robert McCabe, only two players were recruited for this position, including one that fogged the mirror.  However, if you include their solitary RB in that position, listed in one recruiting service as an ILB, suddenly it's three players, with two of them at least acknowledged by the services.  The Committee, in a split decision, decided there was enough there to give them an extra needs point.  (To be fair, the Committee made sure that their more curmudgeonly members were away at Stuckey's when the vote took place.)

DB = 0 (of 4).  The Committee freely admits that despite the Hoyas losing one of their (other) best defensive players last season to graduation, CB Jeremy Moore, it doesn't necessarily follow that they need to replace him with multiple bodies in the defensive backfield.  Even so, however, one DB, unranked and unrecognized, ain't going to cut it anywhere.  That's like casting the wide net and getting one herring in return.

WR = 2 (of 3).  A classic case where depth (4 WRs) and just enough quality (2 fogged a mirror with the recruiting services) gave the Hoyas an extra point that they perhaps did not earn.

COMMITTEE ADJUSTMENT: 0.  It's no secret this year that the Committee has been, perhaps, a bit less grouchy than in past years.  Still, though, they need to see something to justify the bonus points.  Multiple offers from other schools.  Some FBS interest.  Something that appears to show that, perhaps, the class, or individuals, are more than what has been written.

But the Committee didn't find anything.  Believe me, they looked.  They looked for missing Jumbo points.  Speed points.  Offers.  "Interest".  But there simply wasn't enough to justify the extra points.