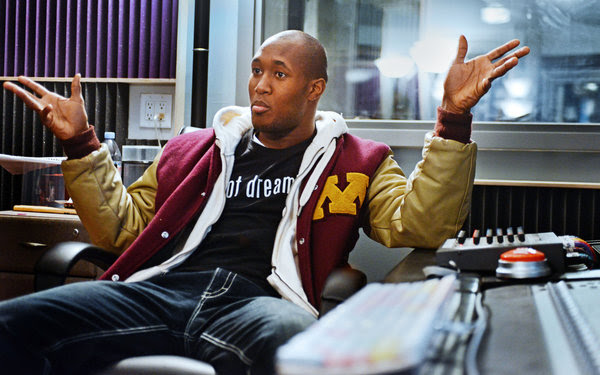 I am not usually one to rake the NCAA over the coals.

As the cops of collegiate athletics, I understand their job is hard, and too many athletic departments are trying to break the rules.  Even if some rules are strange or restrictive, at their heart they are there for good reasons.

But they've been slow to adapt in some ways to an ever changing digital world (as Lehigh football fans undoubtedly are well aware).

And yesterday, an enforcement case came to light that just begs for commentary.

It's the case of Minnesota wrestler Joel Bauman, who was yanked from competing for the Gopher wrestling team for violating an NCAA bylaw.  His crime?  Recording a song and charging 99 cents for it on iTunes.

Bauman aspires to inspire through his music, mainly hip-hop and rap. His most recent song video, “Ones in the Sky,” which has a positive message and urges people to pursue their dreams, drew more than 47,000 hits on YouTube. It can also be downloaded for 99 cents on iTunes. That is a problem for the N.C.A.A.

Since Bauman performed under his own name and identified himself as a Minnesota wrestler, the N.C.A.A. ruled Bauman ineligible for the remainder of the season. J. T. Bruett, Minnesota’s compliance director, said Bauman violated an N.C.A.A. bylaw prohibiting student-athletes from using their name, image or status as an athlete to promote the sale of a commercial product. The university asked Bauman to remove his name and likeness from videos on YouTube and Tunecore.com. Bauman refused. Told by Bruett that he could regain his eligibility if he used an alias instead of his real name, Bauman again refused.


Talk about an interesting interpretation of a bylaw.  The full text of the bylaw appears below:

The interesting part is that it's pretty clear - to this, admittedly, untrained eye - that the bylaw was written with the intent of prohibiting a student-athlete to be paid lots of money to license his likeness on a box of Wheaties.  Which makes sense; sponsorship by a "commercial establishment" violates the amateurism of athletics, something I think everyone can agree on.

But this day and age is one of self-promotion, and entrepeneurism, via the internet, something probably not conceivable when the bylaw was originally written.  It seems like it was assumed that in order to make any significant money, you'd need a commercial establishment to do so.

Today, though, the internet allows people to make money in ways that were inconceivable even a decade ago.  Anyone can create a blog, ask Google to provide ads for it, and get paid some money to do so.  Anyone can design a T-shirt, put it up in any number of online stores, and sell it.  Anyone can record a track, put it up on iTunes, and charge money for it.

Are all of these NCAA violations?  The way Minnesota's compliance director sees it, apparently, the answer is yes.

What if you're a student-athlete, and come up with a fantastic product idea in the microbiology lab that gets you an invitation on the show the Shark Tank?  Well, if you've got a product, you're a "commercial establishment", so therefore, it seems, it's an NCAA violation.

Which, to me, seems ludicrous.

Mr. Bauman is not promoting anybody but himself and his music.  It can be reasonably assumed that all the money is going to him or his family, though undoubtedly Apple takes a cut of the profits as a part of iTunes.

Can it be conclusively argued that Apple is profiting in any significant way off of Mr. Bauman's song?  No more than Google could claim that $100 of profits from a generic blog consisted of 1/1,000,000th of their quarterly earnings in any given quarter.  To huge companies like that, the sales of one individual piece of digital media is how regular folks think about pennies.

Most importantly, though, it's not like Mr. Bauman's fame comes from his wrestling - it's coming from some other non-wrestling talent he has.  It simply shows that wrestling isn't the entirety of who he is, but just a part of his overall person.

These fact's haven't really penetrated the Minnesota compliance department - nor the head coach of the Golden Gopher wrestling program.

He remains on partial athletic scholarship (10 percent tuition, he said), a stipend he will lose next year if he remains ineligible.

His dilemma has not affected the Golden Gophers, who regained a No. 1 national ranking after winning the national duals championship last weekend. Bauman has never been a starter — he backs up Scott Schiller at 197 pounds — and has not competed since sustaining a concussion three months ago. Coach J Robinson believes Bauman could be a starter next year and has urged him to forget about music until he graduates.

“I don’t think Joel is dealing with this the right way,” Robinson said. “He came here to be a wrestler, not a singer. He’s got to decide what he wants to do. You can’t do three or four things well.”

I don't think that's a fair categorization.  Really?  You have to decide to be a wrestler or a singer?  Of course the head coach would prefer his student-athletes devote all of their spare time to improving their wrestling techniques, and no doubt the life of a collegiate wrestler requires year-round training and skill development, but to say that you can't sing and wrestle seems to be a false choice force-fed by the NCAA.

We live in a day and age when you shop yourself all the time on a digital profile.  Those profiles show who you are.  They are self-promotion.  Why shouldn't Mr. Bauman say on his profile that he's a Minnesota wrestler, except to satisfy some ghost NCAA requirement?

This seems to be at the heart of another piece of the article:

Told by Bruett that he could regain his eligibility if he used an alias instead of his real name, Bauman again refused.

“I think a lot of artists and rappers today hide behind their aliases,” Bauman said. “They don’t want to take responsibility for what they’re actually saying. I’m Joel Bauman. My message is, I will inspire and I will impact. I am not going to hide behind an alias to do that because that’s my message. I can own up to that message.”

So it's not a violation if he came up with an alias to perform under, like Bauman Cougar Mellencamp, but it is when he uses his name and calls himself a wrestler.  It's as if he'd need to make an alias, again, to conform to an NCAA rule, not because it's what he artistically wants to do.


This case just seems so contrary to the spirit in which the rule was created.

In the case of a commercial establishment, they're using the fame of an athlete in order to promote some product, like Michael Jordan pushing McDonald's hamburgers.

But Mr. Bauman is presenting, well, himself, with something that qualifies almost as a biographical fact about himself as a way to present himself personally, something that's done by billions of people all over the world in Facebook, Twitter, LinkedIn and probably other networks too numerous to name.

And it's supposedly an NCAA violation.

Ultimately, the product he's "selling" is himself, not a box of corn flakes.  In the last ten years, this is how business and self-promotion is done, and among the upcoming generation it's accepted as a way of presenting yourself online.  But this fact has missed the NCAA, who have perverted their thinking to believe that it's his notoriety as a collegiate wrestler that is driving the sales of his music that is making Apple rich.

How crazy is that?