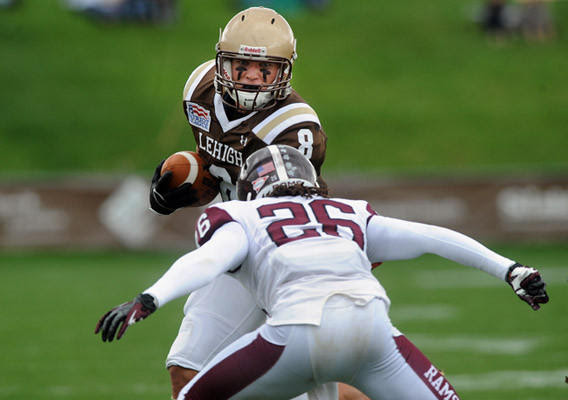 Sometimes, the most exciting, entertaining games are the ones you least suspect, and this well-recapped Fordham/Lehigh game was one of them.

I can't recall a week when it was so abundantly clear that there needed to be three special-teams Players of the Week.  As much as I tried to narrow it down, I couldn't - all three made such huge contributions, I simply had to include them all.


This week's LFN Players of the Week go to:

Defense: Senior LB Jerard Gordon (9 tackles, 1 tackle for loss, 1 pass break-up, #6 flying all over the field during the game)

Congratulations to the winners!


“What I loved about our kids is that they weren’t fazed by the 14-0 deficit,” said Lehigh head coach Andy Coen. “They went right out and scored the next 24 points. We just kept hanging in there and once again it came down to (the fact that) we made a couple more plays.”

“I was telling people all week that Fordham was a much improved football team,” Coen said. “I thought they were very well coached and made adjustments during the game on both sides of the ball. My hat is off to the job those guys did.”

It was a dream come true for senior PK Jake Peery. Literally.

On Saturday afternoon, he did.

Peery's 22-yard field goal as time expired gave Lehigh a memorable 34-31 win over Fordham to delight most of the 9,291 fans in a Family Weekend & Young Alumni Reunion crowd at Goodman Stadium.

"I had a dream about it [Friday night], not a kick from 22 yards but from a little bit further … not a ridiculous distance," Peery said. "Usually, every night before a game, I try to visualize everything that's going to happen."

“It’s a challenge when you’re down,” said Colvin, who went 24-for-40 for a career-high 341 yards with a TD and INT. “It’s exciting and as a competitor you want to have opportunities to get your team into an opportunity to win. You have to have that mentality of no fear and understanding it’s a long ballgame and we were able to come back. We knew we were going to be able to execute.”

The Rams were able to cut the deficit to 31-24 on Fordham PK Patrick Murray’s 23-yard field goal in the third quarter and tied it at 31 on WR Greg Wilson’s 13-yard TD reception from QB Ryan Higgins with 11:42 left in the game.

The teams then exchanged two punts apiece before Lehigh was able to capitalize on good field position from Dormevil, who had 63 yards on three punt returns.

“Fordham has a great punter who was an All-American last year so we knew he was going to give us lots of great kicks and as a punt returner that makes you excited because the deeper the kick the better opportunity you a have to return it,” said Dormevil, who has replaced Jason Suggs as returner after the latter muffed three punts (losing two) against Princeton on Sept. 15. “First thing is secure the ball, get two hands on it and once that happens, you make sure where the gunners are, make the first move and go.”

Lehigh enjoyed one of its largest non-Lafayette home crowds in recent years on Saturday.

And the actual football fans among the 9,291 at Goodman Stadium got everything they were looking for — lots of offense, an exciting finish, and a Mountain Hawks victory.

"It was entertaining for them, I'm sure," Lehigh coach Andy Coen said after a field goal on the final play gave his team a 34-31 win over Fordham. "Our student body is doing a better job … the band is great … the cheerleaders are great … they all do a great job of supporting the team. And it certainly doesn't go unnoticed by our team."

Lehigh could very well be 1-4 and the Eagles could be 0-4, and yet they are both in good shape as we turn the calendar to October because they have been able to fight through their inconsistencies and win close games with big plays late.

I don't know how the season will turn out for either of them, but they have been equal parts exciting and exasperating to this point.

The feeling is that both can play much better than they have, and once they do, look out.

Then again, they have both shown enough flaws and vulnerability that you wonder when some of their problems could catch up to them.

The Mountain Hawks improved to 5-0 today after beating the Fordham University Rams, 34-31, with a field goal in the last three seconds of the game.

Lehigh currently has the nation’s longest regular-season winning streak with 14 wins. Their win today was also their 15th straight win over a Patriot League opponent.

“I’m proud as heck of our kids,” Fordham head coach Joe Moorhead said after the game. “They played a great game. It’s unfortunate it ended the way it did, because I thought we played well enough to win. Lehigh made one more play than we did.”

“Lehigh’s focus this week was to stop the run and stop RB Carlton Koonce and challenge us to pass the ball and win that way,” Moorhead said. “We talked to the kids last night that we feel we’re diversified enough as an offense that we should be able to do both well.”

A loss like that can demoralize a team, its effect potentially lingering for weeks. Fordham head coach Joe Moorhead knows his team cannot afford for that to happen — there are still six games to play.

“This is a very resilient group,” Moorhead said. “There’s a lot of fight in this team and the message in the locker room was we can’t let this beat us twice.”