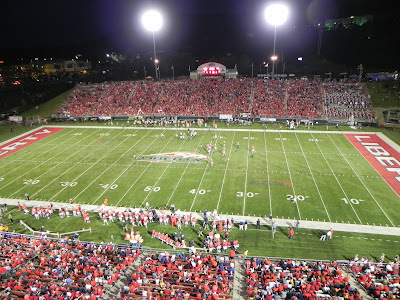 And in a big spot, senior QB Michael Colvin delivered.

Fading back to pass, Colvin instead accelerated past the hole that senior C Tom Ruley and senior OL Vinny Pelligrini opened up, and saw nothing but green turf and white-shirted blockers in front of him.

It didn't seem like a big thing at the time during the pregame when it was announced that Pellegrini and sophomore OL Matt Douglas would be switched on the depth chart as first-team right and left guards.

But in a game that seemed like it was going to turn on one or two big plays, it was one of the big plays for Lehigh, who took the game by the horns in that huge 68 yard TD run, riding the wave to a huge 28-26 win over Liberty in Lynchburg, Virginia.

"It’s not always pretty, but we have the will to win, we know how to win and we have to keep finding ways," Colvin told the Express-Times' Michael LoRe after the game.  "We knew Liberty was a very, very good football team, much better than their 0-3 record.  They played us very tough."

The game started with a script familiar to any Lehigh follower this year - the Mountain Hawks zipped to a quick 14-0 lead, thanks to some timely passes from Colvin to junior FB Zach Hayden and senior WR Ryan Spadola and finishing rushes by Colvin and junior RB Keith Sherman.

But as happened so often this year, Lehigh tried to go for the jugular, and couldn't quite get the back-breaking score.

After driving to the Liberty 44 and the Flames with lots of momentum, the Liberty defense made two big stops to grab it from Lehigh.

On third down and a half yard, Colvin tried to fool a Liberty goalline defense and hit surprise starter senior TE Jamel Haggins with a deep pass, but even though two Liberty defenders were literally hanging onto him for about five yards, no flag was called as the pass landed incomplete.

Then, on a slow-developing run where Sherman was stopped short on 4th down, Liberty QB Josh Woodrum and WR Pat Kelly went to work, with a that shot of momentum and the partisan crowd helping lift them back into the game.

Woodrum would connect on two big first-down completions to Kelly to get the Flames' offense going, andwhen he found TE Brandon Apon, who was filling in for the injured TE Justin Gunn, for a 39 yard touchdown strike, the energy from the crowd of 17,139 mostly red-shirted fans seemed to explode like Liberty's flame-belching, firework-firing scoreboard.

And even though it was Lehigh 14, Liberty 7,it felt almost inevitable that the Flames were going to tie up the game, somehow, some way.

After a Lehigh 3-and-out followed the touchdown, Liberty would continue lining up athlete to athlete, and smacking Lehigh's defense in the mouth, ultimately seeing RB SirChauncey Holloway get loose and scamper for a 22 yard touchdown to tie the football game at 14 by halftime.

The Flames dominated time of possession in the game, holding onto the ball an eye-popping 42 minutes of the 60 available minutes.

"Our message before the game was to go out and compete, compete, compete" a drenched head coach Andy Coen said after the game.  "We knew we were stepping up a level in competition here.  We hung in there."

As the third quarter came and went, Lehigh's offense still couldn't get past the Liberty 40 yard line, but the defense, who was still getting smacked in the mouth pretty good, stiffened and made the Flames settle for field goals instead of touchdowns.

"I'm used to seeing teams shy away from me, but I was happy to see the action," senior CB Bryan Andrews said after getting a key pass break-up on a Woodrum bomb to WR Ryan Ferguson.  "On that actual play, I had the ball in my hands, but he ended up ripping it away."

Another key point, unnoticed by many, was the play by freshman LB Matt Laub, who was pressed into service as the teams' long snapper this week, and not only "came up aces" on all his punt snaps, but also made two strong-armed tackles of Liberty kick return phenom KR Kevin Fogg as well on a punt and a kickoff return.

Then came the huge momentum shift to the Mountain Hawks from Colvin's touchdown run - and, feeding off that energy, a tipped ball by junior LB John Mahoney and senior CB Gabe Johnson would find its way into the hands of senior LB Billy Boyko - who took it to the house for a 39 yard touchdown run.

Suddenly, instead of being down by 6, Lehigh was up by 8, with 6:06 to play in a stunning turn of events.

"Once I got to the 5, there was no way I was not going to get into the end zone," Boyko said.

Liberty, though, wasn't through yet, mounting a 10 play, 75 yard drive to cut the deficit to 28-26, ending with a 3 yard run by Woodrum with just under a minute to play.

On Woordrum's rollout on the 2 point conversion, Andrews perfectly anticipated the play to Kelly - Mr. Reliable all night - and the critical pass tipped incomplete, ultimately ending the Flames' bid to win the game.

"When it ran my way, I had a feeling it was coming to me," Andrews said after the game.  "It was actually a play we were aware of, so I already knew what to do."

Once done, it was up to senior RB Zach Barket to get the winning first down - giving Lehigh their first 4-0 start since 2001.

"It was a dogfight," Boyko said after the game, "but we fought through it as a team."